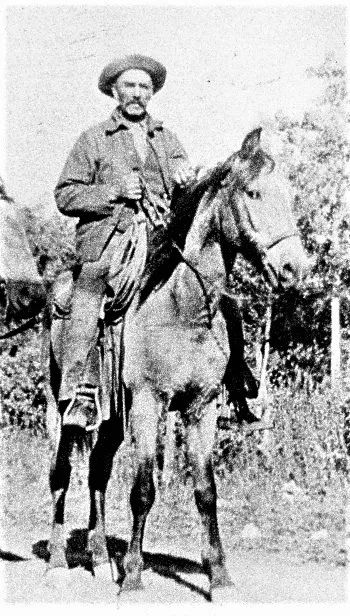 "The story 'Of Horace Brewster is not so much a man's biography as the story of what went on around him." So begins the article in the Tombstone Gazette entitled Montana Cowman.

I never met my grandfather, Horace Brewster, born on November 8, 1855, in the area that would become Cleveland, Ohio. He died December 26, 1932, fourteen years before I was born. Although, growing up hearing stories from my grandmother and father, and having read a number of books describing his life, I suggest that perhaps there is something to be said for the man.

To have lived in the lawless and bloody frontier and survived the Indian Wars and life on the open range in the Montana Territory required true grit. This was the beginning of the cattle industry in Montana and clearly the era of the great roundups which gave significance to brands and branding as a result of the open range and cattle rustling.

These were also the years that created legends such as Sitting Bull, Crazy Horse, Custer, Doc Holiday, Butch Cassidy, Sundance, Kid Curry and many others. However, unless you were busy robbing trains or otherwise involved in regular gunplay, your contributions were less inclined to be well documented.

The term "cowboy" in the 1800s had a relatively negative connotation as cowboys were often young fellas from Texas that spent most of their time rustling cattle. However, today many attribute the term to describe an individual on horseback, herding cattle, packing a six-gun, and living life on the frontier. Under that definition, Horace was all of that and more.

Horace arrived in Montana first at Virginia City with his mother, brother Charlie, and step-father Dr. Rhoades in 1864. Dr. Rhoades followed the gold discoveries so the family never was in one spot long and the family soon moved to Last Chance Gulch (Helena). The next biggest dream took the family to Washington Territory; however, it was at that point that Horace declared his independence and began working his way back to Montana.

Horace spent the years from approximately 1872 to 1910, working for various outfits in Montana. One of his first jobs was that of a "bullwhacker" moving freight between Carroll Bottom and Helena. It was during the 1870s that Horace Brewster began working for Robert Coburn, first at the ranch on Flatwillow Creek near the Little Snowy Mountains and later as ranch foreman of the 30,000 acre Coburn Circle C Ranch located in the Little Rockies. As ranch foreman he was responsible for hiring, firing, and maintaining order; negotiating grazing leases with the Rocky Boy Reservation; occasionally representing the ranch at Stockgrowers Association meetings; and was in charge of one of the last big roundups, the Judith Roundup, ever held on the open range. He was known for his ability to break a wild horse utilizing gentle techniques. Handling ranch hands must have often required the same ability; but perhaps not quite so gentle.

A memorable encounter that happened on the Coburn Flatwillow Creek Ranch occurred in 1877. In Chief Joseph's attempt to reach the Canadian border to escape the pursuing U.S. cavalry, the band of Nez Perce appeared early one September morning camped on the ranch. Coburn went out to meet with the Indians and his instruction to Brewster was that if the Indians killed him then Brewster was to shoot Coburn's wife and children rather than be captured if there was intent. An ugly order that fortunately was not required as Chief Joseph and his band peacefully moved out before the following morning.

While foreman of the Circle C, Brewster hired one of Montana's favorite sons as a nighthawk - Charles M. Russell. The two became lifelong friends and spent time together in Glacier National Park after the open range years were gone. Horace was one of two riders that rode in Russell's funeral procession. He continued to work for the Robert Coburn Ranch for the remainder of the 1800s.

Approaching the retirement years and after nearly 40 years of busting broncs and chasing cattle, Horace left the Circle C for a job in Glacier National Park. He became the first park ranger under Major Logan when Logan became Glacier's first superintendent in 1910.

Walt Coburn may have said it best in his book Pioneer Cattleman in Montana: "Brewster, more than my father or older half-brothers or any other man, had taught me whatever I knew about punching cows." "The day he said good-by I felt that no man would ever be able to take his place, and I have never had any reason to change my mind about him in any way."

So, while it may have been said that it was more about the story of what went on around him, Horace Brewster actually lived it and was a part of the story, a part of the early history of Montana.