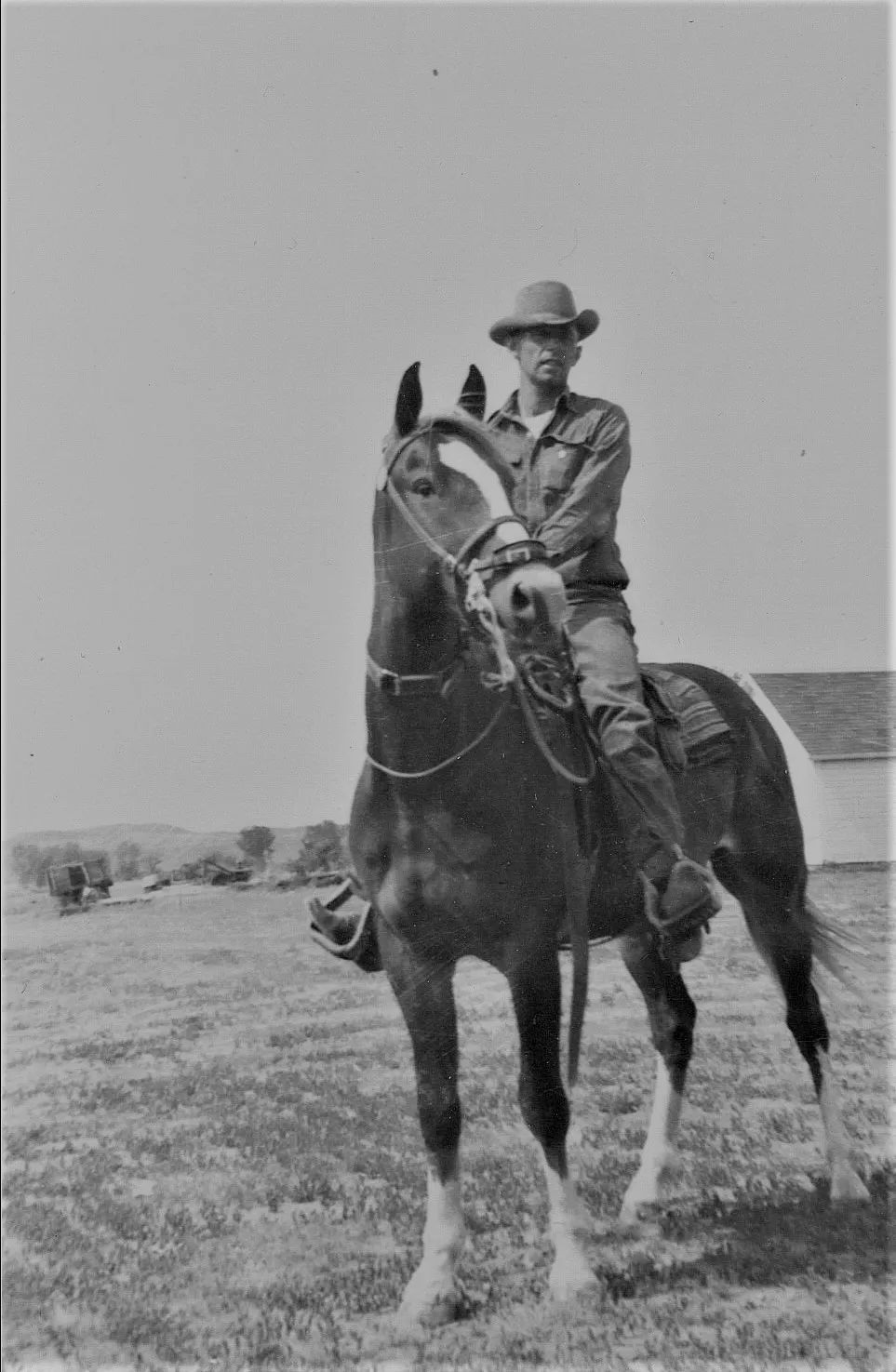 Cliff Wolfe was born on September 28, 1919, at West Fork, Montana, during a fall snowstorm on the family homestead. He is the fifth of seven children born to James and Thresa (Jannsen) Wolfe. In 1932 when Cliff was 13 years old, his mother and the children moved to Scobey during the school year so they could attend school. Cliff’s father worked on the farm in the country. The family leased pasture for their horses and a milk cow. When he was home, one of Cliff’s jobs was to gather, milk, and take care of that cow. Cliff played on the school’s sports teams and graduated from in 1939.

Like most of his peers, when not in school and in the summer time beginning at the age of 16, Cliff worked outside of the family home, riding and cowboying for the McLeod Horse Ranch south of Peerless in the 1930s. In those days before the country was fenced with barbwire, the McLeod Ranch grazed and raised horses on the open range. The McLeod outfit’s range spanned from the Canadian border to the and from Frenchman Creek west of Opheim to near Culbertson. In the early part of the 20th century, the McLeod Horse Ranch ran thousands of horses on the open range. They sold some of those horses as remount horses to the U.S. army, saddle horses to local ranches, and teams for farms in the Midwest and cotton fields in the Deep South; however, their main business was shipping trainloads of horses to slaughter houses in the East to satisfy the “gourmet” appetites of the East Coast and of Europe. The McLeods also furnished bucking horses for the Wolf Point Wild Horse Stampede for over 30 years.

Cliff’s job consisted of gathering horses, branding colts, and “cutting” stud horses. The crew typically branded 600 to 700 colts per year, using a crew of six to eight cowboys. Horses were gathered and run from “stud bunches” in the hills. A “stud bunch” consisted of a stud horse and a number of mares. Each bunch was named either for the stud or for the location the horses roamed. For example, there was the Gray Stud bunch, the Royal Stud bunch, the Chicken Butte Stud bunch, and so on. The stud bunches were well known to Cliff and the rest of the cowboys on the McLeod outfit. Horses were generally kept until they were 4 or 5 years old. Cliff explained the selection process in this way in the March 3, 2006, Agri-News: “If a rank horse showed no improvement after four or five rides, a cow boss was inclined to send the horse down the road. A crippled-up cowboy was no good to them, so as soon as they seen the horse wasn’t going to give up; they canned ‘em.”

Cliff earned $35 to $40 per month during those days, and he worked long hard hours to get that paycheck. “In them days, cowboys was cheap, and horses was worth money.” The McLeods furnished room, board, and horses; the cowboys supplied their own saddles, bridles, and other essentials. A typical day in the summer started with the cowboys waking at 2:30 a.m. for breakfast with work starting at about 4 a.m. after the nighthawk had collected the cavvy in the rope corral. The workday ended about four in the afternoon. Cliff would later recount, “We were wild kids having a good time and getting paid for running horses.”

Cliff also served as the McLeod Ranch “rep” during the legendary roundups of the Chapple Brothers Canary (CBC) to insure that the McLeod horses were identified. After the horses were separated from the others, they were taken back to their range on the north side of the Missouri River. When asked about his favorite part of the McLeod Ranch job, Cliff said it was gathering and trailing the horses. Cliff said, “once it is in your blood, it is hard to get it out.” Cliff’s work experience at the McLeod Horse Ranch laid the foundation for a lifetime of working with cattle and horses throughout Montana.

On September 27, 1940, Cliff married Violet Cornwell in Scobey, Montana. Cliff joked in later years: “We started with nothing, and we still have half of it left.” In the 1940s and ‘50s, Cliff and Violet managed the old N – N Ranch, better known as the “Hog Ranch”. Cliff explained the odd name: “Many years ago, the Niedringhaus family owned the ranch and 1,000 head of cattle. They shipped in a trainload of hogs to graze like cattle, needless to say, the surrounding nesters got fat on hog meat.” Located on the south side of the Missouri River southwest of , the ranch covered over 50 sections and ran 350 to 700 head of cattle depending on the year.

With no electricity and no indoor plumbing, the ranch was primitive when compared to today’s standards. Winters were spent cutting ice blocks from the to be stored in the icehouse for the coming summer. During the long cold winters of , the froze hard, and the roads were often impassible due to the snow. As a result, there were times when Cliff would drive a team of horses across the ice to retrieve hay from the north side of the for the cattle. He would also drive vehicles across the ice to or Frazer for supplies and to visit friends and family. By this time, Cliff and Violet were raising all of their seven children.

About 1953, the decision was made to leave the N – N Ranch and to move to a ranch outside of Richey, Montana and from there to John Scott’s TN Ranch, 60 miles south of Miles City on the Powder River. Through his years, he also trained cutting horses for competitions. In the early 1960s, Cliff and Vi moved to . While there, Cliff helped with the world famous Miles City Bucking Horse Sale. He also helped gather Ed Vaughn’s bucking horses and well remembers trailing them into and down for the sale.

In 1997, Cliff and Vi returned to Miles City, their home base. Cliff lost his beloved Vi in 2008 after 67 years of marriage. Today, at age 92, Cliff still lives in . His circle of friends and admirers is large, and his memory of days gone by is keen. He was quoted in the September 24, 1999, issue of Agri-News as saying: “When I get old, I will quit!”

As Tami Blake wrote in the March 3, 2006, issue of Agri-News “If it’s a cowboy thing to do, Cliff’s done it.” He’s roped a coyote, crossed the Yellowstone behind a herd of horses, and trailed cattle 70 miles to market.”