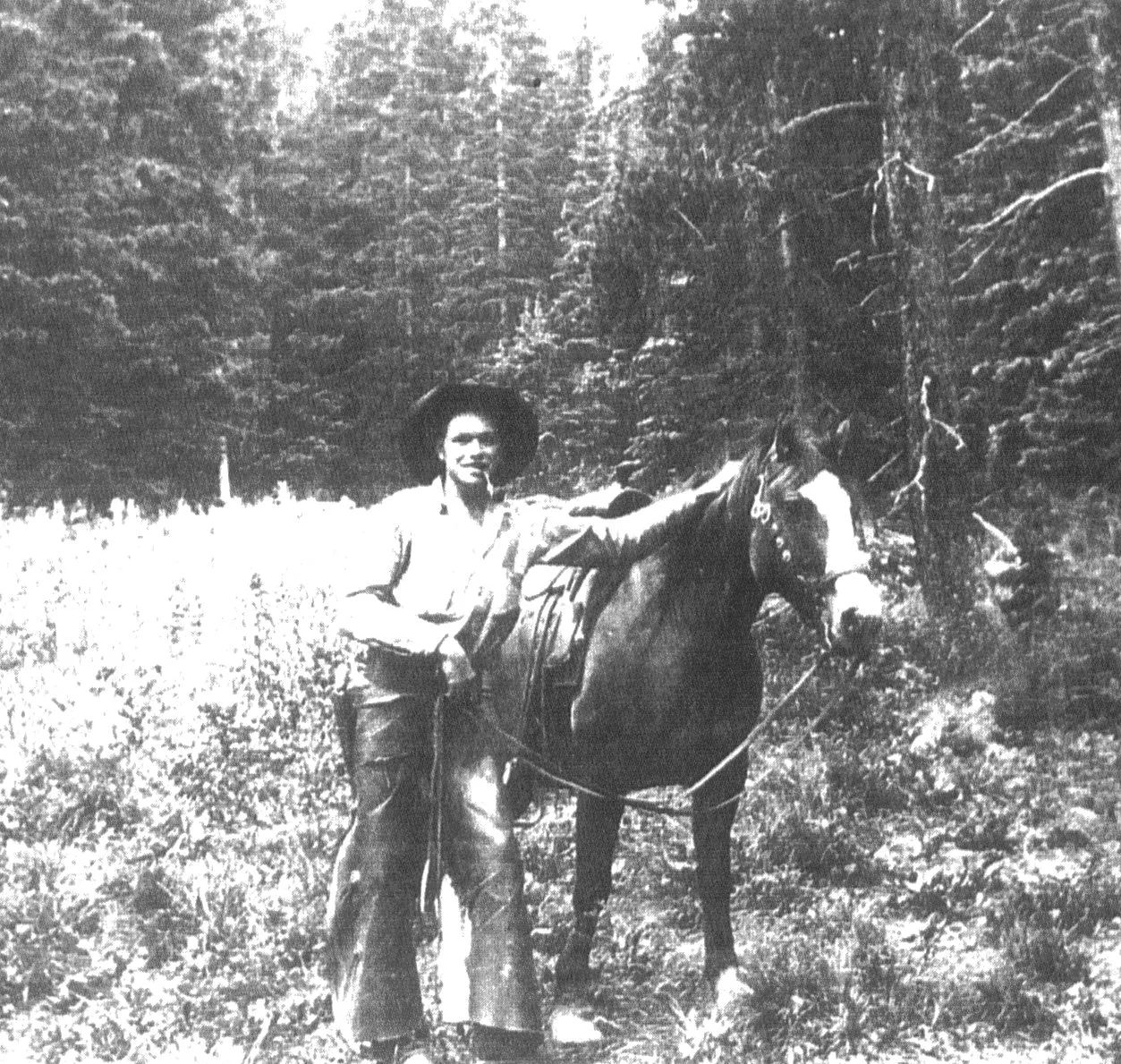 Stephen Woodrow Mosher was born November 3, 1912, at the family ranch located sixteen miles south of Augusta near Clemons, Montana. He was the first child born to Amelia and Stephen Woodman Mosher. Steve had two older sisters and an older brother from a previous marriage, and brother Richard, born in 1914.

In 1877 “Steve’s” father, originally from Maine, homesteaded on the present-day ranch. He acquired several thousand acres of land and was one of the first in the area to raise sheep. This was not received well by several neighboring ranchers. One day while riding his horse in the Dearborn River area, a couple of cattlemen gave chase with the idea of lynching him. Mr. Mosher sought refuge at the home of two women who were his friends. They hid Mr. Mosher and his horse, and when the cattlemen came to ask if the ladies had seen a rider in the area, they directed the cowboys to a different area.

On April 10, 1914, in Helena, Mr. Mosher died of a sudden heart attack. Amelia was left with four small children, a baby on the way and a $20,000 debt. Over several years, Amelia managed to repay the bank loan, expand the ranch acreage and raise cattle as well as sheep. It was Amelia’s philosophy that she would receive only one raising and selling cattle. But with sheep, she would receive two payments: one for selling wool and another for selling sheep.

There were numerous buildings on the ranch, including the ranch house, bunk house where the hired men lived, icehouse, chicken house, barns for milking, barns for the sheep, barns for horses, a building for curing meat, and a store house. Amelia would buy large quantities of several food staples packed in large wooden barrels. Many ranchers, neighbors and Indian families purchased food from Amelia.

Steve Mosher’s education started in Helena where he stayed with relatives while attending the first and second grades. Since everyone in his family spoke German, Steve learned English in school. As a child, he was sickly much of the time with tuberculosis of the knee. He recalls a doctor in Great Falls casting it and while in the hospital Steve and another patient, a young girl, enjoyed racing their wheelchairs in the hallway.

Because Steve didn’t have a father to learn life skills from, much of his knowledge about ranch life, hunting and trapping, came from relatives and the hired men. He liked to say there never was a person who didn't teach him something. Steve was taught how to drive a team and wagon when he was fifteen years old. In the late 1930s, the ranch operated eight horse teams for haying in summer and feeding cattle in winter. He helped with branding, haying, irrigating, and the usual ranch chores. As a young boy, Steve loved to trap beaver and muskrats. Shooting gophers was another pastime.

One summer when Steve was a young man, his job was to pack supplies back into the Helena National Forest where Amelia had a grazing permit for several bands of sheep. Steve learned how to tie packs on the horses and lead a pack train from the home ranch, over the Continental Divide, to the shepherds in the mountains near Ovando

In 1932, Steve graduated from Augusta High School. Upon his graduation, majoring in agriculture, he was awarded a scholarship to attend Montana State College. While attending college at Bozeman, he met the love of his life, Gladys Nordquist, of Belt and married in nearby Great Falls, Montana on June 17, 1935.

Steve and Gladys raised three children, Karen, Bill and Marilyn, who were taught ranch life as well as a love for the outdoors. The kids learned how to ride horseback, fly fish, shoot a gun and help with haying. Steve documented his children’s lives as well as numerous pictures taken with movie and 35mm cameras. He also took photos of friends and family at various school and community events.

Steve had a strong sense of community involvement. He served on the local school board for nearly twenty years, as a fifty-year member of the Augusta Masonic Lodge, a member of Great Falls Scottish Rite, and the Algerian Shrine. He helped with the local 4-H Club by teaching youngsters how to show livestock. Steve also taught many hired hands how to hunt and fish.

Steve was a great prankster. He played tricks on many of the young men who came to work on the ranch. For instance, one high school student couldn’t cut his pancake because Steve cooked the pancake with a milk filter in the middle of it. At one of the Saturday night dances, a friend sweet on Steve’s niece wanted to bid on her decorated box lunch. This was the highlight of the evening, as the highest male bidder got to enjoy the company of the young lady as they ate their supper together. Steve tricked his friend into bidding on another girl’s box lunch. Eventually Steve’s niece and his friend married. Another popular prank was to put limburger cheese on the car exhaust manifold of newlyweds, and yet another, someone would open a car door after a dance and have a wild cat or skunk jump out. Steve’s sense of humor and tricks were endless and he was a part of it all.

Steve, at 95 and Gladys 93, live in their own home half a mile from Augusta where they raise a garden and many beautiful flowers. Steve ran a trap line for many years, until the winters got too cold for him to tend to. He enjoyed cutting and polishing stones which he made into jewelry until his eyesight began to fail.

Today, the home ranch is managed by Steve and Gladys’s son, Bill, and their grandson, Jason. In Steve’s lifetime he acquired many memories of how things used to be and has experienced various mechanical innovations that have changed ranch life forever.