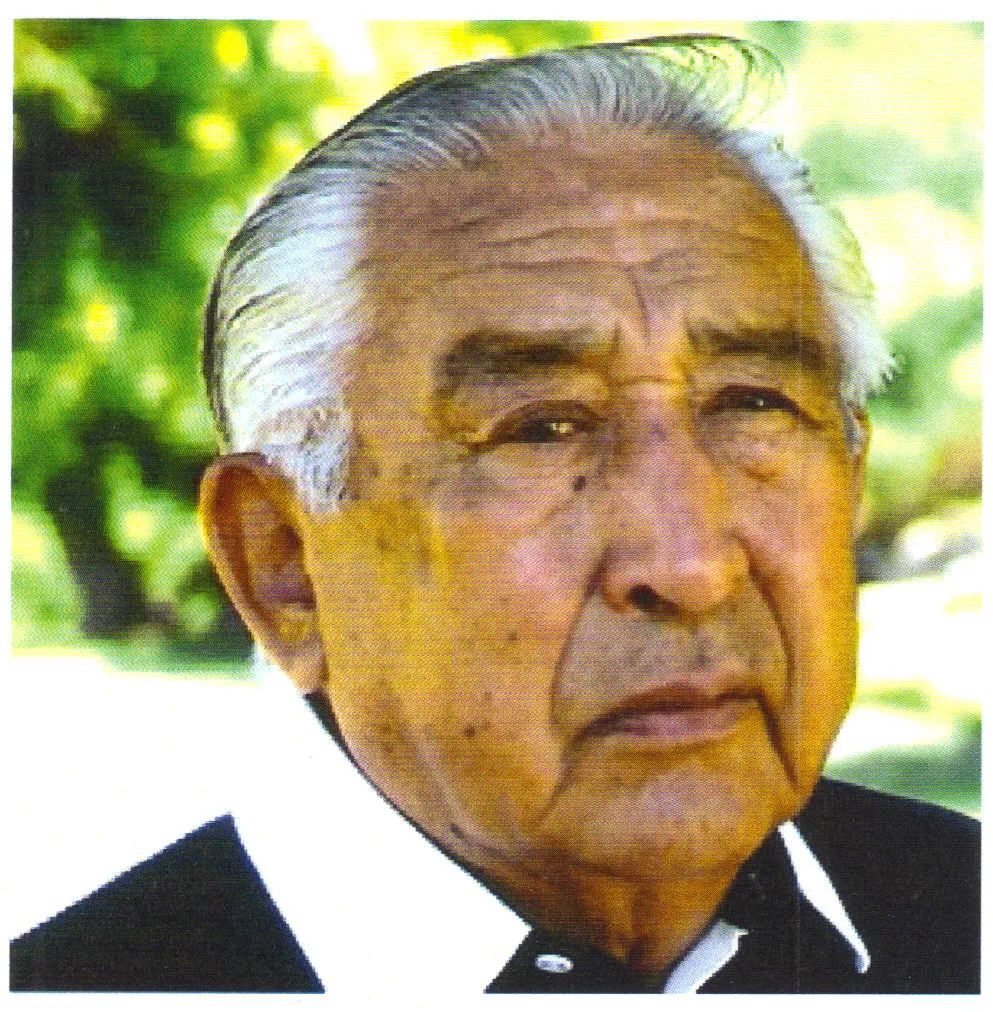 Dr. Barney Old Coyote, Jr., (Chiip Kalishtahchia, translated from the Apsaalooke/Crow as White Bison Calf), worked for and reached the highest levels of achievement in war and peace. When he was eighteen years old, Barney Old Coyote enlisted in the United States Army Air Corps shortly after the Pearl Harbor bombing and became the most decorated American Indian in World War II. After the War, he continued his education, becoming a revered teacher in the areas of conservation, land management, agricultural engineering, Native American studies, with bilingual education in high schools, colleges, and adult education. Barney is a leader in Indian education, always championing the cause of underprivileged students. He went on to promote tribal economic development, international trade, and helped found the first Indian-owned national bank. He served at high levels in the U.S. Department of Interior. Throughout his life, continuing to this day, as a member of the Whistling Water Clan, Tobacco Society, Pipe Carrier, and founder and member of the Crow Cultural Committee, Barney Old Coyote practices and disseminates Crow values, ideals, and culture. Further, he embodies the spirit of Montana, resilient, productive, and humble.

Barney was born in 1923 on the Crow Reservation in Montana. Barney’s birth mother was May, and his father, Barney Old Coyote, Sr. His maternal aunt and uncle Alfonse (Al) and Susie Childs raised him as their child. He grew up at Beauvais Creek, near St. Xavier, Montana. Barney, as have many rural Montanans, has been a rancher, a champion bronc rider, and an avid outdoorsman.

His World War II military career is marked by high distinctions. Barney was listed in the Stars and Stripes magazine as a recipient of the Soldiers Medal. His military record consists of combat and non-combat medals including the Air Medal with oak clusters, the Silver Star with cluster, Campaign Medals and several Battle Stars. In 1988, he and his brother, Henry, were co-recipients of the prestigious National Service Award bestowed by the Vietnam Veterans Coalition. Two Congressional medals authorized by the U.S. Mint were presented to Barney, because Henry had died ten days before notification of the award. In November of 1999, Barney was an invited guest of the Secretary of the Army as a keynote speaker at the Pentagon and was again awarded recognition for outstanding military service. He has been recognized in the U.S. Capitol Building for his service as a “Code Talker,” and has received distinction as a World War II Flying Ace.

In 1964, Barney was appointed as a special assistant to the Secretary of the Interior under Lyndon B. Johnson. His responsibilities included developing model conservation programs and development and training associated with the Job Corps. For his outstanding work at the Department of Interior, Barney received the Distinguished Service Medal.

Barney helped pioneer the opening of trade routes to the Pacific Rim for such products as low sulfur coal, wheat, and other potential tribal and U.S. exports and states. He was the founder and board member of the Montana International Trade Commission, the Center for Development of Indian Law, and the National Alliance of Businessmen.

In 1970 Barney began a long and successful association with Montana State University (MSU) when he was recruited to begin the University's Native American Studies program. He later served as the director of the Bilingual and Bicultural program at MSU. For these and other achievements, MSU awarded Barney an honorary doctorate in humane letters.

In 1973 Barney resigned his post at MSU to become the founder and first president of the first nationally chartered American Indian National Bank. After a few years, he returned to MSU as an adjunct professor in the Native American Studies Department and during that time wrote the catalog and the course outlines for the Little Big Horn College’s Crow Studies Program.

Barney continues to reside in Montana where he lectures, contributes and authors publications. He is truly a state treasure.