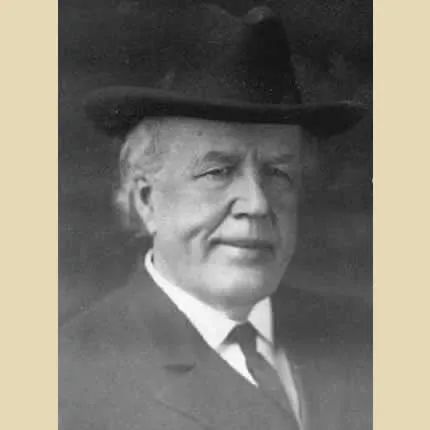 William Wesley Van Orsdel was born near Gettysburg, Pennsylvania, on March 20, 1848. As a young man, “Brother Van” as he was called always knew that he wanted to and needed to preach, so he left his home and traveled west, eventually landing in northcentral Montana.

In 1872, at the age of 24, he boarded a steamboat named the Far West in Sioux City, Iowa, bound for Fort Benton, Montana. “Will” was the only passenger outside the crew as this was primarily a cargo vessel. The captain gave him a fifty percent discount off the normal fare costing him $50 for the 1,955-mile trip if he would help gather wood and do some preaching and singing along the way. During the trip, they were hailed by a frontiersman standing in a clearing with another white man and a small group of Indians. The frontiersman was none other than William “Buffalo Bill” Cody. He told Brother Van that he could go anywhere on the Plains among the Indians. It would not be long before Will himself would enjoy the same opportunity. The ship burned six to eight chords of wood a day to fuel the steam engines. Since the Indians had run off most of the wood cutters along the river, each ship had to gather its own wood supply. Will’s main job when they stopped for wood was to be on guard for Indian parties.

Will arrived in Fort Benton on a rainy Sunday, July 1, 1872. Upon stepping off the ship, he encountered his first experience with “Montana gumbo” that made his feet larger with each step. Gumbo was something he would become very familiar with during the next 47 years as one of the first Methodist circuit riders in the State of Montana.

Very early in his ministry he became known as “Brother Van,” and the name stayed with him for the balance of his life. Many knew him by that name only. It is not known who first gave him the title, but he became so well known by it that a letter addressed to “Brother Van, Montana” was actually delivered to him at the proper location.

Brother Van was trusted and loved by all of the Native American tribes in Montana. He had his first chance to minister to an encampment of nearly two thousand Blackfeet Indians on the Teton River one winter day in 1873. This was the start of a lifelong relationship that he developed with the Montana tribes. They gave him the name “Great Heart,” and he was known to all of the tribes by that name.

When departing from the encampment the next morning, he was invited to hunt buffalo with the men. Brother Van shot and killed a buffalo with his revolver. The hunt was later immortalized by Charles M. Russell, in a painting he titled, “Brother Van Shooting Buffalo.” He first met Charlie Russell when Charlie was sixteen years old and spending his first summer in Montana. That meeting began a friendship that lasted the rest of Brother Van’s life.

Legend has it that Brother Van once met Montana outlaw Kid Curry when a passenger aboard a Great Northern train. Curry and his gang boarded the train and robbed its passengers. The story is told that when The Kid discovered that one of the robbed was the well-known Methodist preacher Brother Van, he reached into his hat and gave Brother Van five dollars. It was said that Brother Van was the only man ever robbed by Kid Curry who came out the better for it as Brother Van was left with more money than he had started out with.

The circuit riding preacher would go on to become one of the most recognizable and best loved men in Montana history. As a circuit rider and administrator for the North Montana Missions and the Montana Methodist Conference, he founded more than one hundred churches and over fifty Methodist parsonages, half a dozen hospitals, a university, and a children’s home. His charismatic, never-say-die faith drew to him people from every walk of life.

Brother Van died on December 19, 1919. Since he had always sent out a great number of Christmas cards he had arranged for the 1919 cards to include the message, “my first Christmas in Heaven.” In recognition of his life and the impact he had on the people of Montana, the State and National flags at the State Capital were lowered to half-mast. This is something that had rarely, if ever, been done to honor any private citizen not involved in government or the military. Brother Van was buried in Helena, Montana.