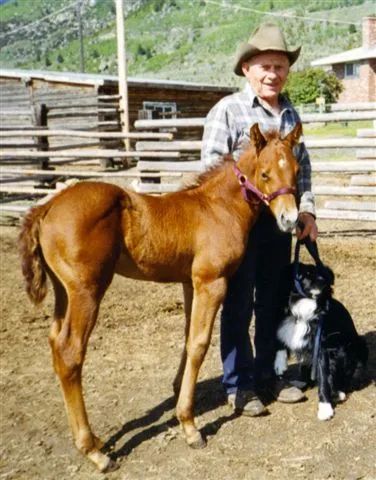 Theodore Henry Parini was born and raised the seventeenth child to Daniel and Olympia (Tartini) Parini, immigrants from Switzerland who made their way to the United States to have an opportunity for a better life. At Elk Park Valley, just north of Butte. Ted grew up on the family dairy where he learned to work at a very young age and become the strong individual that it took to survive in this harsh land. He was raised in an era where only the strong survived and families had to work together. His parents spoke only Italian Swiss, his father later learned English, but his mother never did. Ted spoke both his native tongue as well as English taught to him by his older siblings.

He began milking cows when five years old and told of a cow he was milking that kicked him across the other side of the milking barn. Rather than tears, he picked himself up. His older brothers took over milking that cow, while he was assigned a little gentler one. The Parini dairy ran approximately seventy head. All were milked by hand in the early years, and all cleaning, feeding and milk processing was done by hand. When Ted was old enough, it was his duty to rise every morning around 4 a.m. to gather the milk cows on foot from the pasture, a fair distance from the main house, and have them at the barn and ready to milk.

Horses played a big part throughout Ted’s life. His family primarily worked only with draft horses, so he learned the art of breaking, training and working drafts. Ted learned on his own how to break and train a good saddle horse that he utilized for checking his winter trap lines. He broke and trained good ranch horses and after his daughters started rodeoing, he put his knowledge to work to select and train good arena prospects for his girls. In his later years, Ted began raising some of his own Quarter Horses so that his daughters always had up and coming barrel horses. One such horse he raised was Teddys Money who excelled in the barrel racing world before his untimely death.

Ted was educated in a one room schoolhouse and graduated from the eighth grade. Children didn’t attend school during the extreme winter months because of the severity of Elk Park’s winters, but Ted still told of having to walk to and from school on cold, blistery days. The schoolhouse wasn’t built the best, and on snowy days he told of snow piling up on the inside of the schoolhouse windows. He talked of his wardrobe. This consisted of one pair of pants, one pair of shoes and a shirt, most often handed down from his older siblings and already well worn.

Ted was an avid boxer, and his passion for the sport and determination to excel was so deep that he would jog several miles from Elk Park to Butte and back several times a week to train. His determination paid off when he qualified for the Olympics. However, due to lack of funds and sponsorship, he was unable to attend. He remained an avid boxer throughout his life always enjoying a good boxing match or watching new and old matches on the television.

After leaving the family ranch Ted bought the Beebe Grain Feed Store located in Butte. He owned and operated it for 46 years as a successful businessman all while making many friends. When his children were old enough, he made sure they worked at the store and learned the different facets of the business. Ted operated his store in an old fashioned way, no fancy clothes or offices. He unloaded grain trucks with hand trolleys and always kept his prices fair. Ted felt that he didn’t make a profit on one bag of grain, but rather bags of grain. He helped several customers unable to pay their bill on time. He gave them an opportunity to show their honesty, and to this day there are several old customers still grateful for the opportunity he gave them in tough times.

Ted married Shirlee Norbury on December 30, 1965. They spent nearly forty-five years together. They purchased thirty acres just out of Butte where they built their home and raised two children from Ted’s previous marriage, Shirlee’s two children from a previous marriage, and two daughters of their own. Ted taught his children work ethic, honesty and to make the most of themselves. He liked teaching them how to hunt, fish, raise livestock, process meat, carpenter and overall aim for the things they desired most. He made sure his children were involved in activities that they enjoyed and would make them a better individual. All of his children received a college education.

Ted was a self-taught carpenter and throughout his life built many structures to include the family home, a log barn, numerous other barns and sheds, a one room log cabin, corrals, and many miles of fence. Age may have taken a bit of a toll on the speediness of his carpentering ability, but he never lost his desire to build. In fact, just days prior to his death, he was remodeling a worn out horse shed.

After Ted retired, he kept busy and lived life to the fullest. He spent many of his days riding in the mountains, which he loved to do most. The big joke at Ted’s expense was that nobody would want to buy one of his horses because of “high mileage.” He helped local ranchers gather cattle in the fall, cut his own firewood, hunted, always made sure the home place was fixed up, and clean, and appreciated watching a good rodeo. Ted never knew the meaning of quit and even though age made things a little harder to do, he always found a way to get them done. To Ted the simple things in life brought him the most happiness.