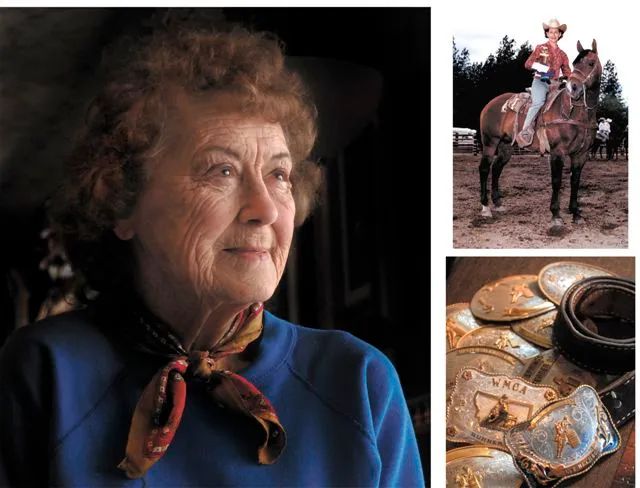 There are only a few horses grazing in her Pablo pasture, but inside the home of longtime rodeo star Fay Haynes, there’s hundreds. Horses adorn TV trays, mugs, salt and pepper shakers, paintings, photographs, and perch on the pinnacles of trophies. Ribbons line the walls of her indoor arena, where locals gather to practice roping twice a week.

When asked about her successes, she always credits the horse.

At the age of 84, Fay Haynes can’t imagine a day when she can no longer ride.

Although a recent medical scare made her left arm nearly useless, today she climbs a small ladder and her well-broke mare “stands like a rock” as she slides into the saddle. Horses have been her life since the age of five, when her dad first led her around on an old gray mare named Dolly while he mended fences. “I didn’t have brains enough to fear a horse,” Fay said. “I just trusted them. And they trusted in return — well, not that I never got bucked off.”

Her persistent riding took her to the winner’s circle in countless barrel racing and pole bending contests. Her first and her favorite horse, Jule Bar, set American Quarter horse records. He won numerous honors, and even took the Best All-Around at Spokane’s Inland Empire rodeo. Fay won awards on barrels and pole bending with Jule Bar, also with his son Jumpy Jule, and then with his grandson, Breeze. While her trophy case is gradually being depleted as she gives away her collection she’s still gaining accolades for her contributions to the equestrian world. This year, the American Quarter Horse Association honored Haynes as one of seven 50-year breeders in the country, meaning she registered at least one AQHA foal for fifty cumulative years from 1957-2008. “I didn’t think about it,” Fay said. “You just raise horses year to year, and it’s your job … but when there’s only seven of us, I guess it’s something.”

Those agile beasts enabled many a Montana rancher to accomplish daily tasks with ease, and others to continue Fay’s tradition of barrel-racing competition. Haynes even sold a fine horse to internationally known clothing designer Liz Claiborne during the late 1980s.

Fay was featured in the November 2009 issue of the American Quarter Horse Journal. The Association sent a pewter trophy and a letter inviting her to attend an awards banquet in Amarillo, Texas.

The horsewoman met her husband, Bill, at a rodeo in Polson, Montana. The bull and saddle bronc rider was judging the rodeo that day. The two married and bought their 3,000-acre Big Bend ranch in the Little Bitterroot, where they raised cattle and bought and sold both Arabian and Quarter horses.

The couple rotated two-hour shifts throughout the frigid winter nights of calving season. When the alarm awoke Fay at 2 a.m., she’d head to the corral where she might find all the cows circled around the newest calf, warming the newborn with their body heat. Freezing cold but determined, Fay would place the calf on a sled and pull it out of the crowd, and the mother would break away from the group and follow Fay to the warm shelter of the barn.

Every year, Fay and Bill saddled up and rode a barge across Flathead Lake to round up stallions on Wildhorse Island so Doc Burnett could geld them. On one occasion, Fay helped roundup 49 of the 94 horses on the island and transport them on a flat barge across the choppy water to Elmo. Bill Haynes kept a pocketknife razor sharp, just in case the barge started to sink, and he’d have to cut the horses loose. The healthy stock was then carted to Missoula and sold.

In 1973, the couple bought acreage west of Pablo and built their home together. Bill passed away just two years later. Fay has never remarried.

Through the years Fay has taught numerous young girls to barrel race as well as trained their horses. Several have gone on to win substantial awards. And the ropers still come to her home to practice twice a week. She will keep riding as long as she can stay in the saddle.

Fay never considered a different lifestyle, although the community has changed dramatically in her time. “Nowadays people might say, ‘Oh, that old lady, she doesn’t know a horse from a Jay bird,’” Fay said. “But I know what I did.” When asked how she has improved the lifestyles of Montana ranchers and rodeo contestants, she humbly avoids the answer. “I’ve helped a lot of people, but they’ve helped me, too,” Fay said. “I just love people.”

Sources compiled from personal interviews and: