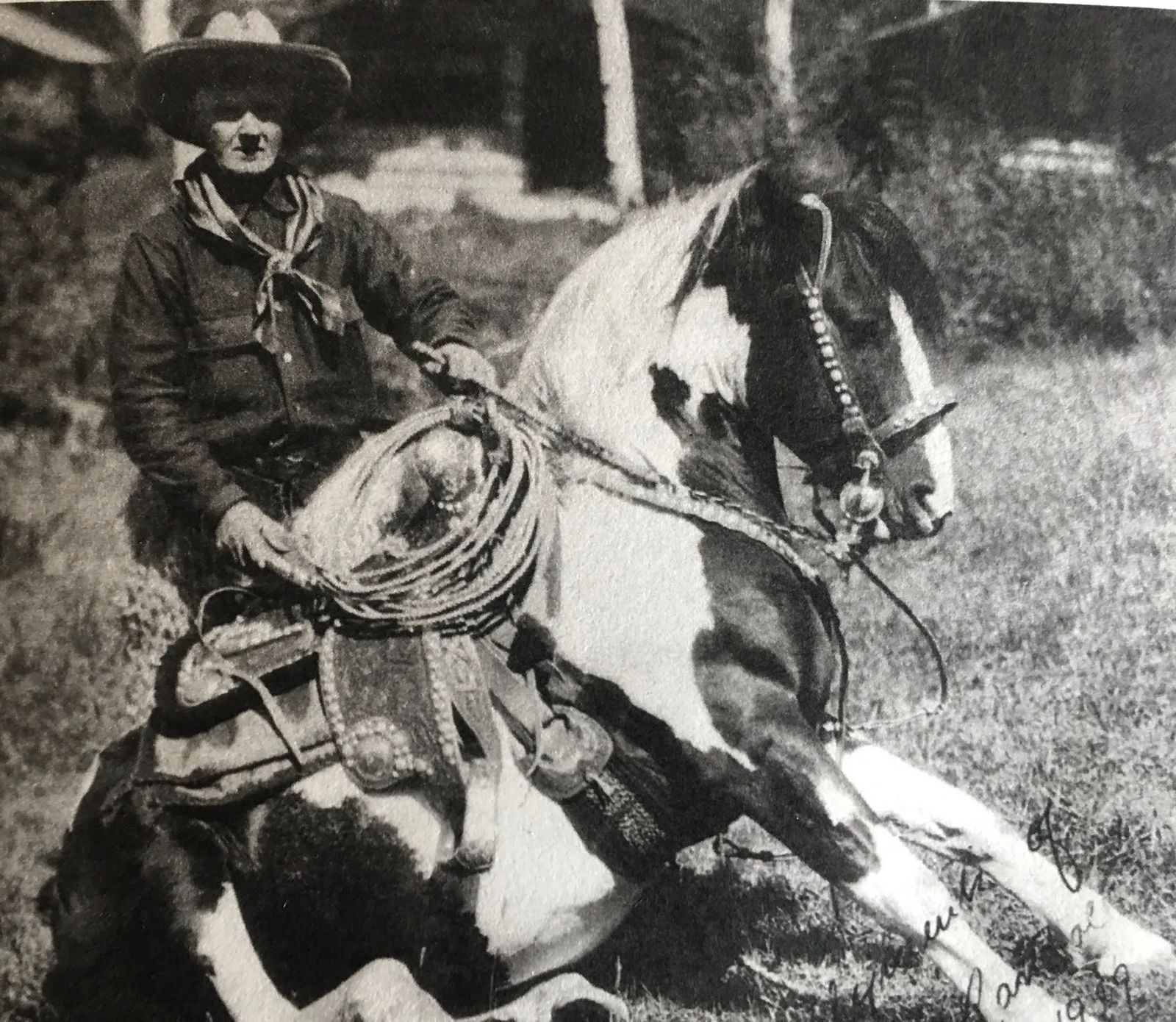 James Norris “Dick” Randall was born in 1866 in Birmingham, Iowa and in 1884 came to Montana Territory at the age of 18. Dick became a horseman at an early age and wanted to become a working cowboy. His first job was with the Seven Bar Seven outfit located in what are now Yellowstone and Rosebud Counties. His work was under the guidance of experienced men of the open range. They were tough and hardy and took their work seriously. When the winter of 1886-87 wiped out most of the big cow outfits numerous cowboys found themselves out of work. A top hand named June Buzzell and Dick headed up the Yellowstone River with a dozen good cow ponies they had bought with their meager savings. They gained employment with Locke and Work digging in irrigation ditches near Big Timber. When the work was finished they resumed their journey to the Lower Geyser Basin area of what is now Yellowstone Park where George Wakefield hired them to nighthawk. In the off season the partners became acquainted with an old hunter and trapper named Proctor, who suggested they spend the winter in his cabin near the banks of the Yellowstone. The time spent their was educational as Proctor went into great detail teaching the habits of wild game and hunting and trapping.

After Yellowstone Park was established in 1872 Dick drove stagecoach for Wakefield. It was here that he learned that Eastern tourists were receptive to all manner of Western lore and were interested in riding, ranching practices and hunting. He established himself as an outfitter and guide to big game hunters and for the next 15 years he conducted parties into the Hell Roaring country north of the Park and into the Tetons.

Dick married Dora Rosebourough in 1892. Their son, Leslie Watson “Gay” was born in 1893 and a daughter, Helen Elizabeth “Bess” in 1897. The children grew up at the OTO and worked alongside their parents.

Dick bought out the squatters’ rights of A. L. Joliff and Ben Blakeslee, on land along Cedar Creek, in 1898, north of the Yellowstone River and in the shadow of the Absaroka Mountains. Dick and Dora raised horses and cattle and bought land from dissatisfied homesteaders. Bear and big game hunters came to hunt in the area, hence Dick guided and outfitted those that made their way to the OTO Ranch. He found himself in an occupation he had not planned and quickly understood that they needed better accommodations to offer the “dudes” and hunters, so he built cabins and planned a lodge to accommodate well-to-do clientele. Guests did not actually start paying for their Western experiences until about 1912. The OTO Ranch became the first Montana dude ranch and was the second dude ranch in the nation.

The 200-foot front, T-shaped main lodge was complete with kitchen and dining room seating sixty guests, a large living room with a rustic fireplace and a recreation and trophy room. The guest rooms with baths were built into the same unit. A hydroelectric plant was installed in the rushing mountain stream of Cedar Creek which flowed near to the lodge and supplied adequate electricity for all guest rooms. A large new tack and saddle room was built together with the corrals. After World War I the demand for dude ranch vacations increased and with that ten new one and two-room cabins were built as well as a thirty-room dormitory. Lodging and amenities were now in place for 90 guests to be registered at one time. Dick oversaw the building of a spectacular hunting lodge, 35 miles from the OTO Ranch, on the Hell Roaring River at the mouth of Horse Creek. It was finished in time for Bess’ wedding to Clyde Erskine. Guests to the OTO and the hunting lodge included eastern bankers and sportsmen from England, Scotland, Jamaica and Germany as well as visits from Paul Von Hindenburg and Teddy Roosevelt.

Over the years the OTO furnished saddle stock for the Livingston Rodeo held in early July. The was a contribution toward the promotion of rodeo that fit well with the dude ranch.

In 1926, the U. S. Post Office Department granted an application for third-class post office to be maintained at the OTO Ranch, to be called Dude Ranch, Montana. That same year Dick became a charter member of the Dude Rancher’s Association. As a pioneer Dude Rancher, he promoted the healthy lifestyle of the outdoor West in a positive manner. In 1934 he was voted a lifetime director-member in the association.

The American Boy Expedition, originating in Boston in 1930, was the forerunner of many boys spending their entire summers at the “Randall’s Ranch”.

Dick and Dora sold the 3,200 acre OTO to their son Gay and a former guest from Maine, Chan Libbey, in 1934. At this time Bess and Clyde retired as well. The dude ranch continued operation until 1939 when it was closed to guests and reverted back to a cattle and horse ranch. The ranch was sold again in 1949 to J. Paul and Jessie Shields. They raised cattle for about 30 years before they sold in the early 1980’s to a Texas land developer who then sold the ranch to the Church Universal and Triumphant in 1986. The Rocky Mountain Elk Foundation purchased the ranch in 1989. They transferred the land and deteriorated buildings to the U.S. Forest Service in 1990 for its prime grizzly bear and elk winter habitat. They bought the property because of its proximity to Yellowstone National Park ensuring that it would remain undeveloped.

Dick was an early conservationist, realizing that the Yellowstone elk needed protection. He became specialized in grizzly bear behavior and knew the territory and habits of the great bears that roamed the area. He would be proud that the OTO Dude Ranch is designated as winter elk range for the northern Yellowstone herd.

A man of great skill and vision - his lodge and cabins stand as a tribute to his craftsmanship and the hay fields remind visitors that the OTO was once a well-known Montana working ranch. In looking for true Montana cowboys, you have to look no further than Dick Randall. He was a genuine pioneer to Montana, and not only influential in dude ranching, but also in representing his state as part of the real West.

The OTO Ranch and restoration efforts began in 1999 as a “Passport in Time” project for the State of Montana. Since then, roughly $90,000 has been donated along with 2,200 volunteer hours.

Randall family descendants joined forces in 2003 and 2004 to help with fundraising and to pay respect to the legacy of the OTO Ranch. The site is listed on the National Register of Historic Places which requires the Forest Service to stabilize and take care of the buildings. Since that time, friends and relatives formed the Friends and Family of the OTO and continue to work toward the restoration and preservation of the OTO Ranch.

He Put The “Dude” in Dude Ranching, The Story of Dick Randall and his Montana Dude Ranch, Friends of the OTO Ranch, Research: Wayne Goutermont, 2010