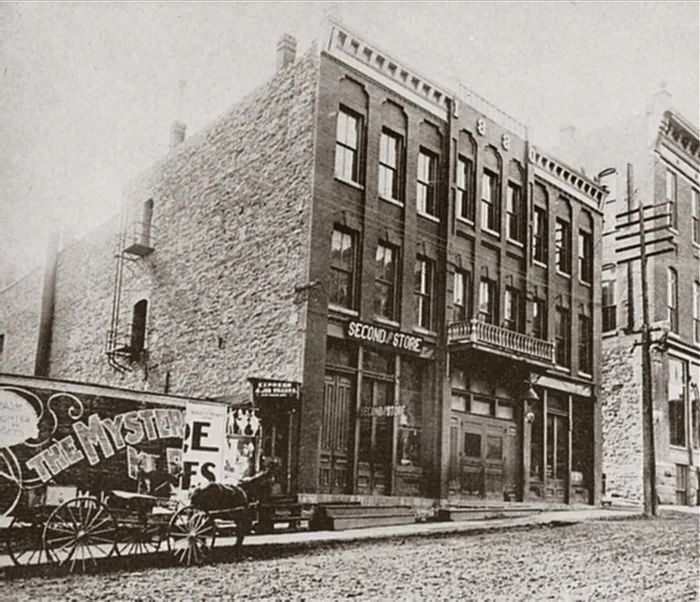 The long-awaited spectacular opening of Ming's Opera House had all of Helena's high society in a buzz. The three-story building seating 900 people and costing $40,000, was an elegant brick construction at 13 North Jackson Street. The tickets, $1.25 each, had been sold out for weeks.

Souvenir programs, stacked near the ticket window, looked elegant, printed on varied colors of satin and scented with a delicate perfume. Everything was ready for the September 2, 1880, grand opening performance.

Katie Putnam, reigning theatre queen, renowned from San Francisco to New York City, did not disappoint the audience. She performed a dual role in an English play called “Old Curiosity Shop" and returned for several curtain calls from the enthusiastic crowd. The reporter from the Helena Herald made note of fancy dresses and jewelry worn by Helena’s elite ladies, all of whom made sure they were seen and interviewed.

Major Martin Maginnis, territorial delegate to congress, gave an enthusiastic address filled with praise for John Ming, proprietor regarding his opera house endeavors. A personal appearance by John preceded the rising of the heavy stage curtain, hand-painted with an Italian garden scene. Katie Putnam stepped in front of the closed curtain to face the public and recite a poem written for the occasion. The poem pointed out that Helena needed Ming’s theatre, even though Last Chance Gulch had been in the entertainment business since the 1860s. With glowing tones, Katie began:

When first a Pilgrim to this town I came -

A very fresh and tender-footed dame -

A Bridge Street cabin was the only stage

Where Farce could roar, or Tragedy could rage;

An earthen floor, the sides of unhewn logs,

We charged for men - admittance free for dogs,

Where tender love scenes in the tragic lay

Were interrupted by the pack mule's bray,

And the prima donna’s warble clear

On the high “C” and upper register,

Was ruined by the Sunday auctioneer.

During the growing pains of the mining town, the Bridge Street Theatre opened in 1865 and was a rough log cabin structure. The Wood Street Theatre opened in 1866 with a drop curtain and coal lamps. In 1870, the Langrishe Opera House was the talk of the town, but fire destroyed the building in 1874. J. A. Sawtelle, an eastern actor of Shakespearean background, came into the mining camp and reopened a place called Harmonia Hall. His building, a wooden structure located on Broadway Avenue, saw its demise in a fire in the late 1870s.

However, another theatre, built on State Street by Chicago Jo, the town's most prominent prostitute and businesswoman, entertained the mining town in the 1860s and remained in business until 1884. She offered tough competition for the Ming Opera house.

Theatre-goers whiled away many a harsh Montana winter night enveloped in the warmth of the 120 luminescent gas-burning stage lights, laughing, crying, clapping, and stomping their feet to the variety of performances including melodrama, vaudeville, hypnotists, magicians, brass bands, Irish comedians, story tellers, burlesque, romance plays and farces. They were held spellbound as the adventures of life spun around on a hand-turned wheel, bringing motion pictures and enlightenment from around the world. Even John L. Sullivan exhibited four rounds of boxing at the esteemed establishment.

The variety of performers who trundled into the theatre never ceased to draw a full house. The theatre was built to make a profit, collecting 20 to 35 percent of the house, but making money wasn’t Ming’s first purpose for his theatre.

John Ming made his fortune stocking general stores in various places in the west and he was a successful cattle rancher. It was his wife, Katharine, who dreamed of building the opera house. Because of the fast growth of Helena and the rich community, Helena was the perfect place to build their monument to themselves and to their own wealth as well as to give a city a permanent gift. By now, Helena was known as the “Queen City of the Rockies.”

Ming continued to upgrade his opera house. In 1888 he planned for another grand opening celebration. Improvements included red plush seats, and red carpeting, gold wallpaper, brass railing around the box seat section, electricity and practical details, such as a sloping floor and fire exits. A restaurant was built on one side of the entrance and a saloon on the other. He advertised the changes brought Helena a “gem of a theatre.” The second grand opening was held on October 31, 1888, with the Pyke Opera Company presenting “The Beggar Prince.” It was a repeat festive event with a packed audience. The happiness proved to be short-lived, however, because as fate would have it, several weeks later, John Ming was dead.

For the next five years, the Ming Opera house rivaled the houses in Denver, Salt Lake, Kansas City, St. Paul, and Butte, Montana. Celebrities favored Helena and performances drew full houses. Dates and terms for bookings were decided by mail, and were generally one night only performances.

Receptions, fancy balls, dinner parties, and invitations to special gala affairs were planned months in advance. The presence of the gifts for people who sang, danced and entertained in a myriad of ways, capped off the Victorian lifestyle in Helena’s elite.

When the 1893 silver crash hit Montana, the Ming family lost their fortunes, and the theatre closed for a short time. Wealthy philanthropists subscribed to the arts and reopened the Ming Opera House. Over $5,000 was raised and Ignace Paderewski, leading pianist of the century, rode the Northern Pacific rails to perform to an overly enthusiastic audience.

The Opera House sold soon after, under the ownership of Eugene T. Wilson, and survived until 1901. In April of that year, Wilson sold the building for $15,000 to John Cort of Seattle, Washington. The name changed to the Helena Theater. Only a few diehards outwardly grieved the loss of the once opulent theatre. In 1915, the Masonic Lodge bought the building and remodeled the interior to suit their needs. The Consistory Shrine Temple Association continues to own and use the facilities.

Many famous performers graced Helena with their talents. Lillian Russell, nicknamed “Diamond Lil,” and friend of the famous Diamond Jim Brady, came to Helena in her own ornate Pullman. George M. Cohan and Eddie Foy danced and sang their way into the hearts of the audiences. Helena Modjeska, acclaimed International Shakespearean actress, performed in Polish, her native language. She had the ability to bring her audiences to tears by her emotional outbursts of tragedy and pain. In an interview she said, “I confess that when performing with an American actor, I would recite the Polish alphabet.” Her acting talents were unequaled when it came to evoking an emotional response by just the sound of her voice.

Helena was not an easy town to reach. The performers came west up river via steamboat to Ft. Benton, then made their way by stage or wagon. The long-awaited railroad eventually arrived into Helena making it easier to travel by 1887. Helena patrons, thirsting for outside information and culture, appreciated the hardships the actors had to endure to keep their appointed stage dates.

The addiction to a wandering lifestyle lasted lifetimes for the greats in the business. One example, Sarah Bernhardt, from France, traveled several tours throughout the United States, especially the western area. She made over nine million dollars and died penniless. She worked the stage right up to her death, at age 79, in 1923.

Sadly, the life of the stage held a two-edged sword. Publicly wooed for their talents, the stage gave these stars their much-needed lift to their egos and filled their pockets with gold. However, their private lives were oftentimes full of despair and great unhappiness. The performers could make hundreds of people laugh and cry during an evening, only to exit the back stage door, their hearts as black as the cavernous theatre when they turned off the last lamp.