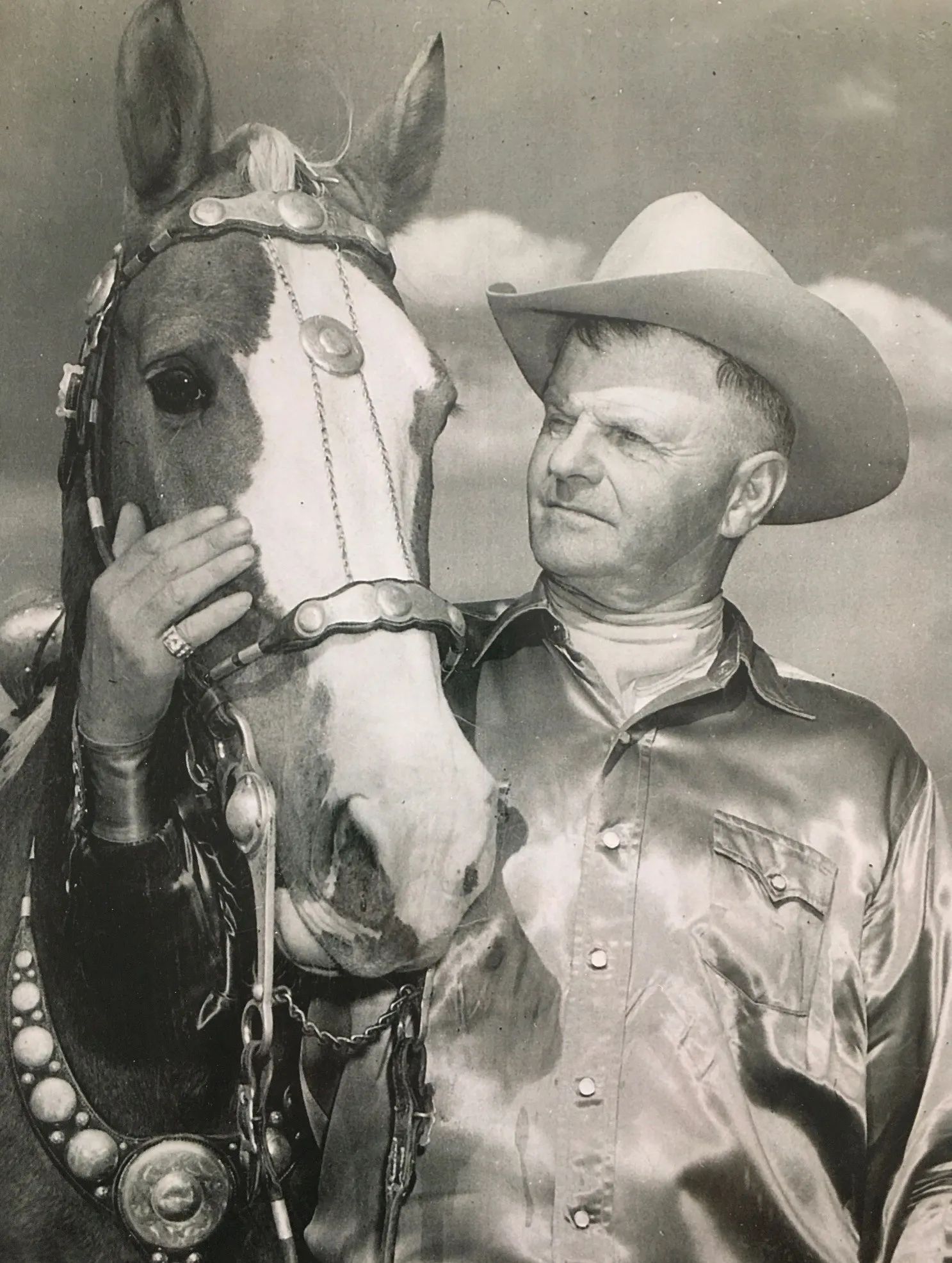 Leo John Cremer was born October 30, 1891, to German Irish parents John and Mary Cremer in Cashton, Wisconsin.  He was third in a family of four boys and one girl. He received his education through High School in Cashton and then entered Notre Dame University to study law.  During his time in college, one of his brothers, C.M. “Cornie” Cremer had taken up homesteading near Richey, Montana.  Leo had been to the area and, after three years of college, decided to go west.  He had met a young lady by the name of Bertha Stokes from Big Timber, Montana, and settled there. They married, and each filed on a homestead east of Melville in 1912.  They built their home on that property, began ranching and raised one son.

In 1926, Big Timber residents were trying to produce a rodeo but were having trouble finding enough horses.  Someone knew that Leo had quite a few horses, so a couple of cowboys by the names of Aubrey and Mabrey McDowell went to Cremer’s ranch.  Leo was haying at the time, so they unhooked the workhorses and bucked them out.  Some of them bucked real well so they bucked them in the rodeo.  This inspired Leo to begin his own rodeo company.  He called it the Leo J. Cremer World’s Championship Rodeo Company. For several years, he trailed his horses to rodeos such as Big Timber, Butte, Livingston and Billings.  In about 1934 he bought a semi truck to haul his stock to Great Falls, Miles City and Lewistown.  In about 1936, he started using buffalo as an added attraction. In 1938, while trying to clear the arena in Lewistown a buffalo hooked Leo’s ‘good’ horse, Pronto, killing the horse.  Leo retired the buffalo and started using Brahma bulls.  He eventually bought more semi trucks and hauled his stock to bigger rodeos held in North Dakota, Utah, Idaho, Wyoming, Colorado, Texas, Louisiana, Nebraska, and Minnesota. When he agreed to produce a rodeo, the contract was sealed with just a handshake.

Leo was a born showman and an astute and respected businessman.  He supervised every aspect of transporting the stock on time, directing the rodeo, and afterward ensured that the stock was properly cared for.  He was always the arena director mounted on his favorite horse he called Murphy.  Leo produced rodeos with a lot of fast action, ran them smoothly and provided added entertainment by contracting high quality specialty acts. These included the Hendrickson Roman-Riding act, Montie Montana, Rex Allen, Gene Autrey, and the Sons of the Pioneers, to name a few. Around 1940, Slim Pickens served as a bullfighting clown for a couple of years for Leo’s rodeo company.

At a Big Timber rodeo, during the clown’s act, a car died in the arena.  With no hesitation, Leo tied his rope to the car and dragged it out of the arena.  In Leo’s words “The show must go on!”  Other notable clowns were George Mills and Jazbo Fulkerson.  Hank Mills and Doug O’Donnell were his outstanding pick-up men for several years.  During the Great Falls Fair, an Air Show plane crashed starting a fire in the horse barns.  Some of Leo’s horses were tragically killed. At the same time, a piece of metal from the plane knocked Doug O’Donnell off from his pick-up horse.  Fortunately, neither he nor the horse were injured.

In the 1930s and 40s, Leo’s rodeo company was clearing profit. Every time land connecting with his ranch came up for sale, he would purchase the acreage.  While he was managing a rodeo company he was also building a ranch.  At the time of his death he owned approximately 75,000 acres.

Leo’s horses were his pride and joy.  Nothing pleased him more than to have one of his horses buck a notable cowboy off.  A family photo shows the famous Casey Tibbs grounded off one of Leo’s best horses called Pike’s Peak.  Leo traveled quite a large area to locate horses and have a good bronc rider try them out.  If the cowboy could ride them, he wouldn’t buy them. Some of his best horses in the early years were Earthquake, Jiggs, White Coyote and Scar Face.  These were horses originally broken to pull haying machinery.  Other outstanding horses in the 1930s were Bobcat, Whirlaway, Will James, Madam Queen and Old Mexico.  In the 40s and 50s they were Golden Pheasant, Devil’s Partner, Come Apart, Big John and Sage Hen.

After Leo’s untimely death in a truck accident on November 28, 1953, his rodeo company was sold to Hollywood actor Gene Autry, with Harry Knight managing the company operations for him.  Two of Leo’s horses, Big John and Sage Hen, were voted Bucking Horse’s of the Year. Leo would have been so thrilled with this honor.  Devil’s Partner and Come Apart continued bucking until they were 28 years old. Leo established one of the greatest string of bucking horses ever assembled under a single ownership.   So deep was the talent of his horses that many of them never bucked more than once or twice a year.

Leo served two terms in the Montana Senate.  He was first elected in 1949 and again in 1951.  During a slow week at the Senate, he jokingly introduced a bill to have the State Capitol moved to Big Timber.  This, of course, made big news.   A Helena woman called him and said, “You blankety-blank-blank - I hope you die!!!”   He only laughed.

The man who was known as “Mr. Rodeo” believed in family, good bucking horses and supporting his hometown of Big Timber. Leo Cremer was inducted into the Pro Rodeo Hall of Fame in Colorado Springs, Colorado in 1979.