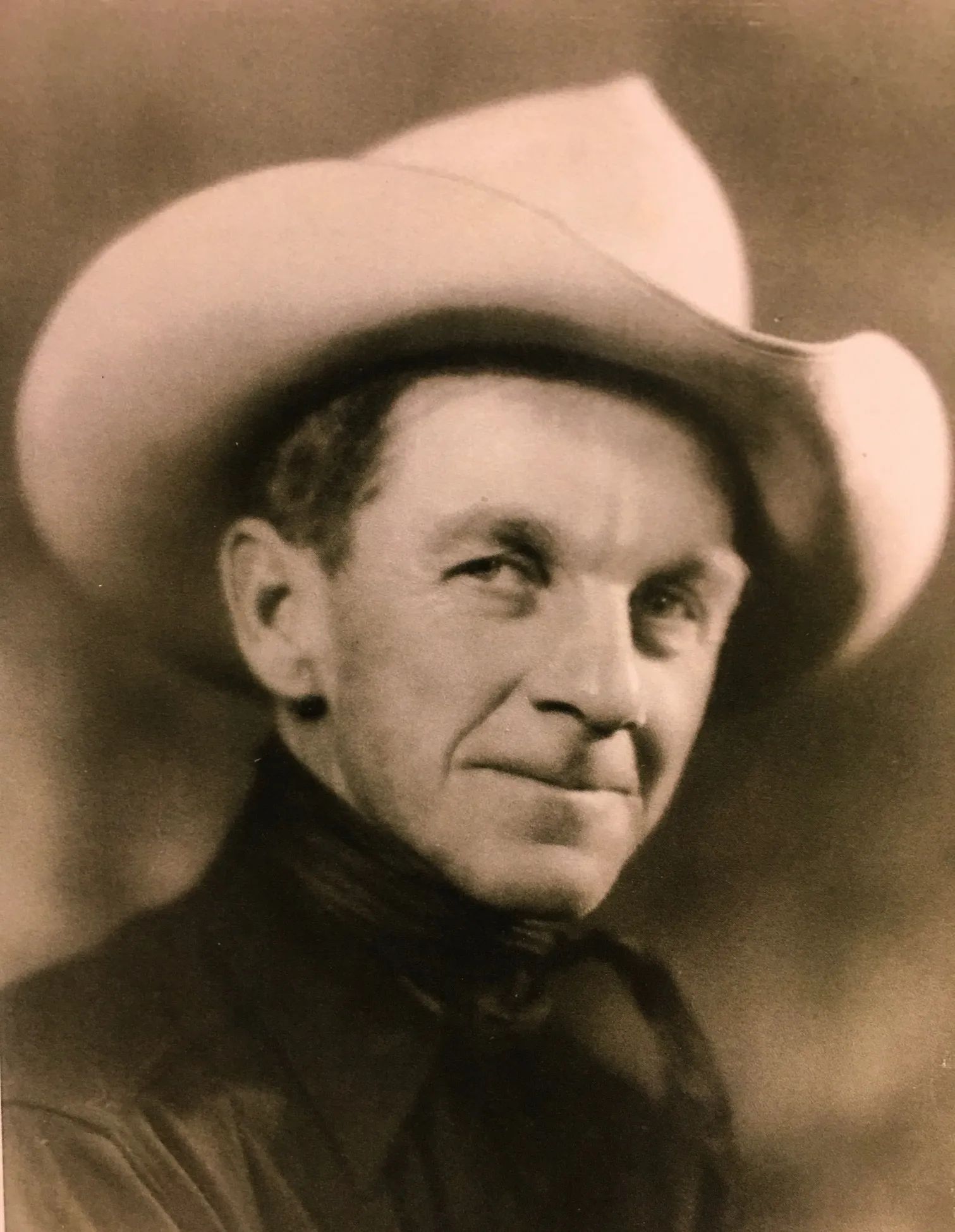 Sidney Arnold Vollin was born April 29,1895, at Sundance, Wyoming, to Jack and Anna Arnold. His father was a trail boss, driving cattle from Texas to Montana. Jack Arnold owned half interest in the 3Vs (VVV) and worked for the Cross Anchor outfit.

That fall a cow and horseman from Oregon, Tom McAlister, took Sid with him to give him a home. Sid stayed and worked for McAlister for several years. Since McAlister ran stock on the Fort Peck Indian Reservation, he was able to get Sid enrolled on the agency books, and since there were no boarding schools at that time, Sid went to the Indian schools at Poplar and Fort Shaw, Montana. As he grew up, he worked for several outfits on the north side of the Missouri: The Madador, The N-N and the XIT. Later he worked for Dave Cooper and Virgil McVee.

In May 1918 he enlisted in the Army and was assigned to the Remount Station at Fort Keogh near Miles City, Montana. There he broke horses for the U.S. Cavalry. In the summer of 1918, Teddy Roosevelt made his last trip west. A celebration was staged in his honor, and Sid was chosen to go to Billings as a representative of Fort Keogh. There he won the championship in bronc riding and was given several gifts by Roosevelt. Among them a pair of buckskin beaded gloves.

Prior to 1920 and after service in the Army, Sid was deputy sheriff of Valley County. Two years later he married Gertrude Burkhardt at Glasgow, Montana. To their union were born four children: Jean, Jack, Jay, and Joan.

In 1925, on the Fort Peck Indian Reservation, where horses were gathered and impounded for taxes, grazing fees or to establish ownership, Sid ran the government wagon with Jim Sweeney.

In 1927 when Chappel Brothers, known as the CBC, began operations in Montana, Sid went to work for them at Oswego, Montana. The first branding of CBC horses was 2,500 head. Three years later Sid moved to Miles City as foreman of the CBC headquartered on Sunday Creek.

A roundup wagon left the ranch about June 1 each year and carried on until all colts were branded. The payroll consisted of 25 cowboys, a horse wrangler, a nighthawk and a cook. Sid's family lived at the headquarters, where they kept about three cowboys, a ranchman and a cook. Each year about 5,000 colts were branded on the range, and in 1934, roughly 20,000 horses came off this range, which extended from the rivers of the Missouri to the Yellowstone and from the Red Water to the Musselshell.

After the CBC closed their operation, Sid ran an outfit of his own north of Miles City where he raised horses and cattle at the head of Dead Man Creek. In 1939, while Sid and Harry Reed were reminiscing about the old days, they agreed that the old cowboys would soon be gone and decided that a get-together was in order. With the help of Lou Grill, editor of the Miles City Star, Dale Wilder, Charley Wiley, Pete Jensen and others, a date was set and an organization was born, called the Range Riders. Sid was on the executive board and served many years in that capacity. He furnished the cows and calves, bucking horses and roundup wagon for the first Range Riders Celebration in 1940. He brought his cavvy of saddle horses, too, for use in the show; 75 head in all.

Sid was the first man in the area to send bucking horses to Madison Square Garden and all the big shows. Soon he was producing rodeos of his own and had Brahma bulls and all the equipment necessary for rodeo production. He produced many shows in Forsyth and Miles City and worked as a pickup man in Wolf Point at the Wild Horse Stampede until he was 72 years old. In his day as a bucking horse rider, Sid won numerous championships: Moose Jaw, Saskatchewan and Glasgow, Wolf Point and Malta, Montana to name a few. But his prime interest was raising registered Thoroughbred and Quarter Horses. At one time he ran 500 head of horses.

Sid sold his ranch in 1950 and leased land on the Fort Peck Indian Reservation, running 1,500 steers. He eventually retired to Miles City.