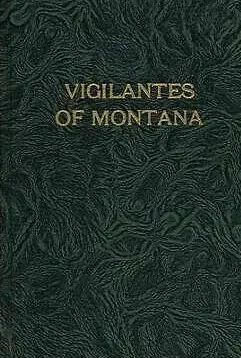 In 1863, under the cover of darkness a handful of concerned citizens, from Virginia City and Bannack, met in secret vowing to bring order out of chaos around the gold fields of Alder Gulch and Grasshopper Creek. The men raised their hands and swore an oath to the newly formed Vigilance Committee. “Join hands and raise them to the Lord Almighty and repeat after me... We the undersigned uniting ourselves together for the laudable purpose of arresting thieves and murderers and recovering stolen property, do pledge ourselves on our sacred honor, each to all others and solemnly swear that we will reveal no secrets, violate no laws of right and never desert each other or our standard of justice, so help us God.” Then each of the men signed an oath and went about bringing justice to the Territory.

In a region where valuable gold was plentiful, transportation was insecure and effective law and order was lacking, travelers became easy prey. It is estimated that over a hundred travelers were killed by robbers in 1863.

As this became a more frequent occurrence locals began suspecting that these crimes were being carried out by a single group of outlaws. The knowledge of this was obtained by confessions from men arrested in early January 1864. The gang of Road Agents known as the Innocents were presumed to be under the control of prospector and elected Bannock Sheriff Henry Plummer. On January 10, Plummer and two associates were arrested in Bannock by Vigilantes and promptly hung.

Since there was no duly appointed judiciary or court trials in this new Territory, the vigilantes created their own rules of justice in opposition of the forces of murder, pillage and assault led by Road Agents. Within six weeks the Vigilance Committee had crushed the power of the Innocents to make the territory a safe place in which to live and work.

Formal territorial law reached Alder Gulch in late 1864 with the arrival of Territorial Judge Hezekiah L. Hosmer. On December 5, he convened a public Grand Jury session in Virginia City and announced that the vigilantes had served their purpose and from this day forward, unilateral actions by vigilantes would be considered criminal acts. The Committee agreed to let civil authority, as its strength increased, claim the exclusive punishment of crime, and in the words of Wilber Sanders, “Leave us the power of the people as a last resort, where governments break down, let the citizens save the state.”

During the period 1865–1870, criminals were executed by Helena's Vigilantes and in 1884, ranchers in central and eastern Montana resorted to vigilante justice to deal with cattle rustlers and horse thieves. The best-known vigilante group in that area were “Stuart’s Stranglers”, organized by Granville Stuart in the Musselshell region. As formal law enforcement became more prevalent in that area as well, vigilantism fell into decline.

Historical analysis of the period ranges from disrepute to heroism, with debates over whether the lack of any functioning justice system and the understanding of due process at the time meant the vigilantes acted in a way they thought was necessary or if modern standards of due process should govern analysis of their actions.