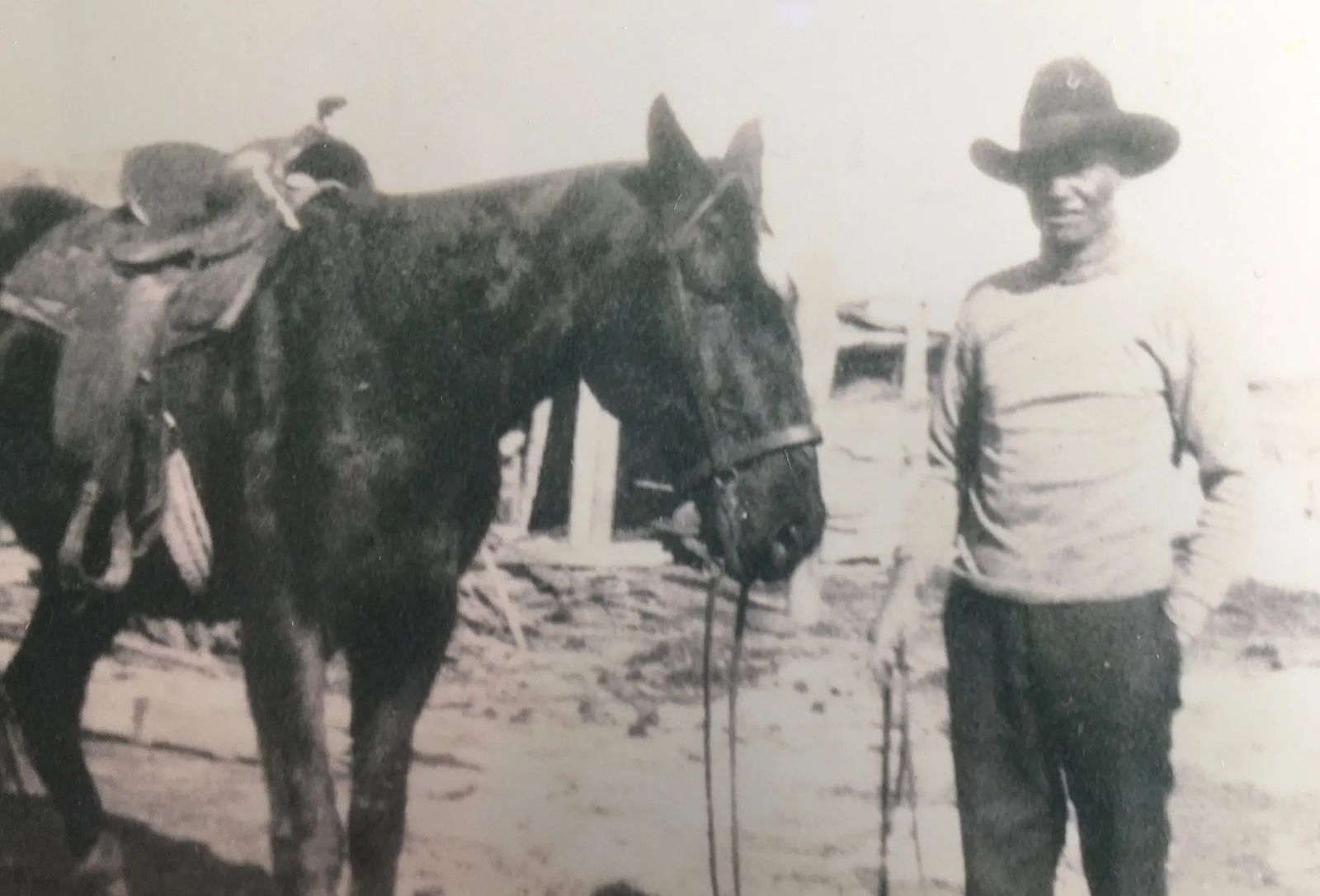 Henry Headdress, Sr. was believed to have been born sometime around March 1888, approximately four miles west of present day Wolf Point, Montana, to Owl Headdress, a former Indian Scout, and Night Hawk. During his formative years, horseback riding was an important part of his existence.

As a young man he met the love of his life, Sarah Mitchell. The family enjoyed the story of how their relationship began. After a couple of dates Henry decided to pursue another young woman in the vicinity, so he rode over to where she lived. He looked in the window and saw that the woman had a visitor who was none other than Sarah, so he decided to vacate the area promptly. In his haste to get away undetected, he didn’t see the clothesline and took a terrible spill. When he slowly got to his feet, he noticed that both young ladies looking out the window and laughing at his humorous accident. After that incident, he courted Sarah Mitchell only, until she married him in 1916. Henry and Sarah were married for 58 years.

Henry and Sarah had six children - Henrietta, Henry Jr., Martin, Nettie, Dale Sr. and Doris. Henrietta, Dale, and Doris survived to adulthood as tragically the other three siblings died of Spinal Meningitis in the 1920s. Henry’s remaining family was very important to him. When Dale was about seven years old, he rode over to the neighbors to play with their children. The neighbors lived along Wolf Creek, just a few miles away. A winter blizzard blew in and Henry worried that Dale might have started home and was lost, so with great difficulty he rode to the neighbors. He found his son playing with the other children safe on the kitchen floor. Staying the night they returned the next day to a very worried Sarah.

Dale entered the service during World War II and fought at Okinawa, Japan. During Dale’s stint in the military, Henry was worried about his safety. He would often go into the hills alone to pray and sing the traditional Assiniboine War Song known as “The Double Attack” to honor Dale and assure the well-being of his son.

During Henry’s lifetime, he was a well-known member of the Assiniboine Tribe who attained an interesting variety of accomplishments.

Worked for numerous ranches and cattle companies in the area including the well-known Fry Cattle Company.

Accomplished horseman who broke many horses. Sarah and Dale often helped with the horse breaking. His favorite was a big bay named Pretty Boy. Henry is credited with having roped an antelope, something that few cowboys could accomplish.

Served as a Tribal Policeman for the Fort Peck Indian Reservation when the police work was accomplished through the use of horses.

Was one of the original members of the “Chicken Hill Singers,” an Assiniboine Singing Group.

Well-known Traditional Indian Dancer who wore his signature white cowboy hat as part of his regalia as evidenced in the 1956 Flynn Creek Pow Wow, shot on an 8 mm camera. He danced until he was in his 70s.

In 1973, when Henry was eighty-five years old, he was honored at the Fiftieth Annual Wolf Point Wild Horse Stampede. He proudly rode in the parade in a Model T car.

Henry died August 13, 1974. The following year he was again honored at the Wolf Point Wild Horse Stampede Rodeo when Marvin Brookman led a black horse with a riderless saddle and boots turned backwards in the stirrups in memory of Mr. Headdress. Henry was greatly loved and admired by his family and friends - truly a man who lived as a cowboy and a horseman his entire life.