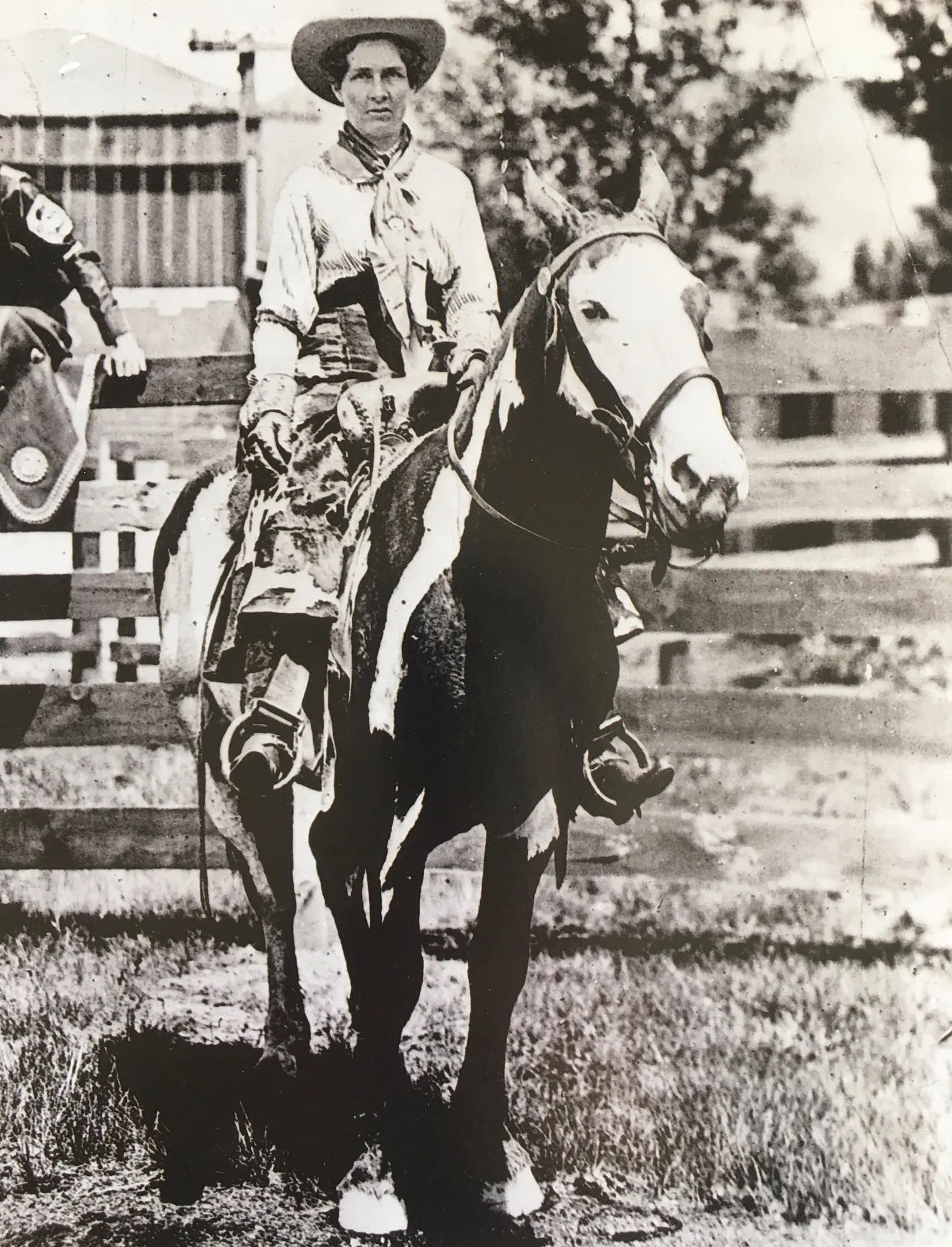 An admirer once observed that Fannie Sperry Steele must have been born with glue on the seat of her pants. Horses were her life, and she loved equally the ones that bucked her off and the ones that served her faithfully. When Fannie neared the end of her eventful life, she insisted, “If there are no horses in heaven, I do not want to go there.”

Fannie’s father, Datus Sperry, came west and established a ranch along Seven Mile Creek, Montana, in 1872. Seven years later, her mother, Rachel, followed, arriving at Fort Benton via the steamship Montana on June 29, 1879. The Sperrys moved to the Hilger Ranch in 1884, caring for the Hilger stock in exchange for the use of land. Datus and Rachel soon found a homestead at the base of Sleeping Giant where Fannie was born in 1887. An old injury prevented Datus from riding, so Rachel taught her five young children to sit a horse almost before they could walk. All the Sperry children became exceptional riders and broke and shod their own horses by the time they were teenagers.

Fannie inherited Rachel’s fierce love for horses, especially pintos. Fannie rode her horse to school at Mitchell (now the Sieban Ranch).On weekends, she and her brother Walter rounded up wild horses and drove them into a corral. Fannie rode the wildest ones. Her reputation for courage, skill, grit and sticking on the back of a bronc spread among the locals. The summer of 1903 at Mitchell, sixteen-year-old Fannie awed spectators with her ride on a bucking white stallion. Soon thereafter Fannie was demonstrating her riding skills in Helena horse shows.

Rodeo was in its infancy in 1904 when the Capital Stock Food Company of Helena sponsored Fannie in a new event, a relay, in which racers rode only thoroughbreds. Distances varied with riders changing horses, and, sometimes, their own saddles. Butte promoter Walter R. Wilmot signed Fannie and several young ladies to ride relays across the Midwest in 1905. The “Montana Girls” did well, and Fannie won her first medal for meritorious riding in a 24-mile relay at the Minnesota State Fair. In 1907, the “Montana Girls” scandalized crowds by daring to show their black riding bloomers. Afterward, Fannie branched out into bucking horse competition. She earned a gold medal as Helena’s “woman bucking horse” champion. Women competitors were few in those years, yet her name was widely known.

In 1912, Fannie was invited to ride against five other top women competitors at the first Calgary Stampede rodeo. Fannie, with her mother as chaperone, arrived at Calgary’s Victoria Park on September 1, 1912. A commotion on the grounds drew them to the horse barn where a wild bronc named Red Wing had just thrown and stomped cowboy Joe LaMar to death. On the Stampede’s final day, contestants drew slips of paper that would influence their chances. The wilder the horse, the better the chances to show off one’s skill. Luck was with Fannie: She would ride the ‘killer outlaw’ Red Wing.

Fannie’s ride on Red Wing is recorded in rodeo history as one of the best rides ever made by a man or woman. Fannie’s success was partly because of her style of riding “slick.” This meant that she rode without tying her stirrups under the horse’s belly, a concession judges allowed for women contestants. Most women rode their broncs thus hobbled. With a fifty-fifty chance that the horse would buck off its rider, Fannie viewed the hobbling as unfair. Slick riding, however, demanded precision, balance, courage and unusual strength. Fannie was the only woman rider among her contemporaries to ride her entire career slick, just like her male counterparts. That day at Calgary, she gained the title of “Lady Bucking Horse Champion of the World.” She won $1,000 cash, a $300 gold belt buckle, and a beautiful saddle with hand-tooled roses.

Fannie was a lovely slip of a young woman, ladylike and well brought up. She cared more for horses than cowboys until she met bronc rider and rodeo clown Bill Steele. The couple married in a ceremony in Helena in 1913. Although she favored saddle-worn divided leather riding skirts, on her wedding day she wore a feminine gown of deep blue gabardine with a high lace collar and flounce that concealed a plunging neckline. Bill gave her a corsage of red roses that she pinned over her heart. The newlyweds spent their honeymoon rodeoing. That summer, Fannie won the title of “Woman’s Champion Bronco Buster” at Winnipeg, Manitoba.

Fannie and Bill traveled the rodeo circuit and performed with Buffalo Bill Cody in 1916 at the Chicago Shan-Kive. Both were crack shots. Among other tricks, Fannie would shoot the ashes off Bill’s cigar. She rode bucking Brahma bulls as well as famous broncs. One of them, Midnight, arched his back into an inverted “v” and tossed his rider into the air and then sidestepped. The rider rarely landed in the saddle. Fannie was one of the few who successfully rode Midnight, riding slick.

The Steeles ranched north of Helena and supplied bucking stock to rodeos across the country. Fannie competed in bronc riding until 1925 but continued riding exhibition broncs until the age of 50. The couple bought a dude ranch at Arrastra Creek near Lincoln in 1927. Horses remained central in their lives – keeping a string of pintos that were Bill’s favorites, too.

When Bill died in 1940, Fannie managed the ranch by herself for another twenty-five years. She was one of the first women to receive a packer’s license and well into her 60’s stocked Meadow Creek with fish by pack horse. Fannie shod and broke her own horses to pack, did her own packing and, at the end of the season, trailed her 25 head of pintos seventy miles across the Continental Divide to winter in the pastures where she used to ride as a child.

In 1974, at eighty-seven, Fannie could no longer live alone. She had long fretted about it: “My greatest worry will be the well-being of my pintos. I can leave the range, since I have had a full share of life on it; I can quit the ranch and ranch house and my souvenirs—but I hate like hell to leave my pintos behind.”

In 1975, Fannie was one of the first of three women inducted into the Rodeo Hall of Fame. At ninety, Fannie summed up her life: “To the yesterdays that are gone, to the cowboys I used to know, to the bronc busters that rode beside me, to the horses beneath me (sometimes) I take off my hat. I wouldn’t have missed one minute of it.” She was a Rodeo Legend as well as the quintessential Montana woman: homegrown, determined, gritty, and most of all, an independent of spirit.

Published in the Quarries of Last Chance Gulch Column in the Helena Independent Record, by Helen Baumler