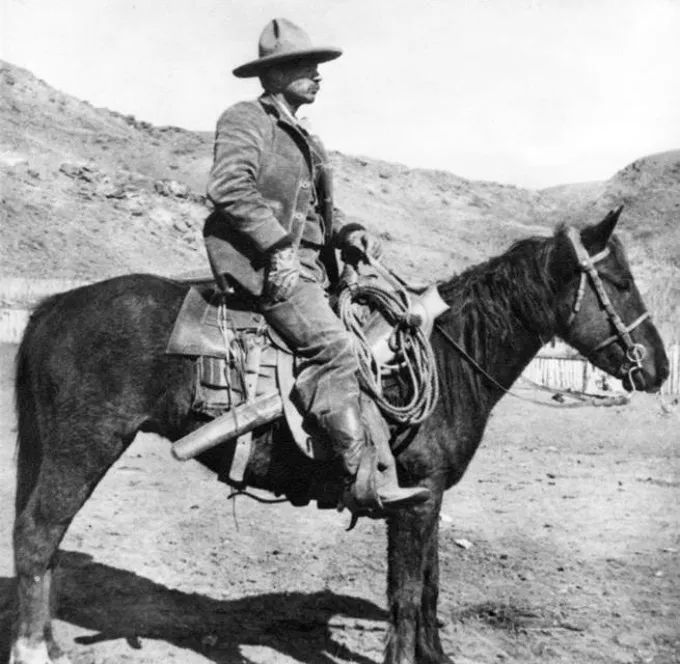 One of John Benjamin Kendrick’s first job, around the age of fifteen, was breaking horses for room and board. In 1879, the twenty-two-year-old hired on with the Snyder-Wulfjen Brothers of Round Rock, Texas to help move a herd of cattle from Matagorda Bay, on the Gulf of Mexico, to the grasslands of Wyoming. Along the way he experienced the worst of what the new land had to offer: drought, flood, storm and stampede.

In 1917 he noted - Anything at night, almost a stumbling horse, the odor of some wild animal or a blinding flash of lightning would start the herd to running. Then the cowboys would have to follow. Sometimes the cattle would run until morning. Or they might stop now and then for a few minutes. Whereupon, of course, we would halt with them, the rain meanwhile coming down in torrents and the night being so black that nothing could be seen but the electricity on our horses’ ear or the lightning wriggling over the ground like illuminated serpents.

Like many of the cowboys with whom he rode, Kendrick’s formal education was incomplete; he did not continue with school much after the fifth grade. However, whatever lessons he missed in the classroom he more than made up for on the trail and during roundups. Instead of gambling and drinking, Kendrick spent his spare time reading and studying the books he carried in his saddle bags.

With his cowhand’s wages Kendrick bought a few head of cattle, which his employer, Charles Wulfjen, allowed him to graze with the main herd. He also held employment with the Lance Creek Cattle Company. By 1882, when the massive Converse Cattle Company absorbed Wulfjen’s holdings, Kendrick was able to sell his own cattle to that company, using the profits to begin another herd. He managed his herds and finances so successfully that when the disastrous winter of 1886-87 brought an end to the golden age of the cattle baron, Kendrick was in a financial position to take advantage of what was for nearly everyone else an impossible situation.

In 1887 Kendrick signed on as superintendent of the Converse Cattle Company. Two year later he moved the entire operation from Wyoming – cattle, horses and cowboys - to the OW Ranch on Hanging Women Creek, near Decker in south-central Montana where he found water, forage and room for expansion. Within another eight years, John completed his purchase of the Converse Cattle Company. Then he started expanding its holdings. Before he was finished, Kendrick’s ranching empire grew to include over 210,000 acres of deeded and leased land in southern Montana and northern Wyoming.

On January 20, 1891, he married Eula Wulfjen and they had two children, Rosa-Maye and Manville. The family lived on the OW until 1909 when they moved to Sheridan, Wyoming. Kendrick became involved in banking business and other enterprises, primarily in the Sheridan area. Very involved in politics, he became the Governor of Wyoming and was elected to serve three terms as Senator.

His life was far from faultless and more than controversial but through sheer determination, John B. Kendrick worked himself out of the rut of poverty and into a position of wealth and influence.