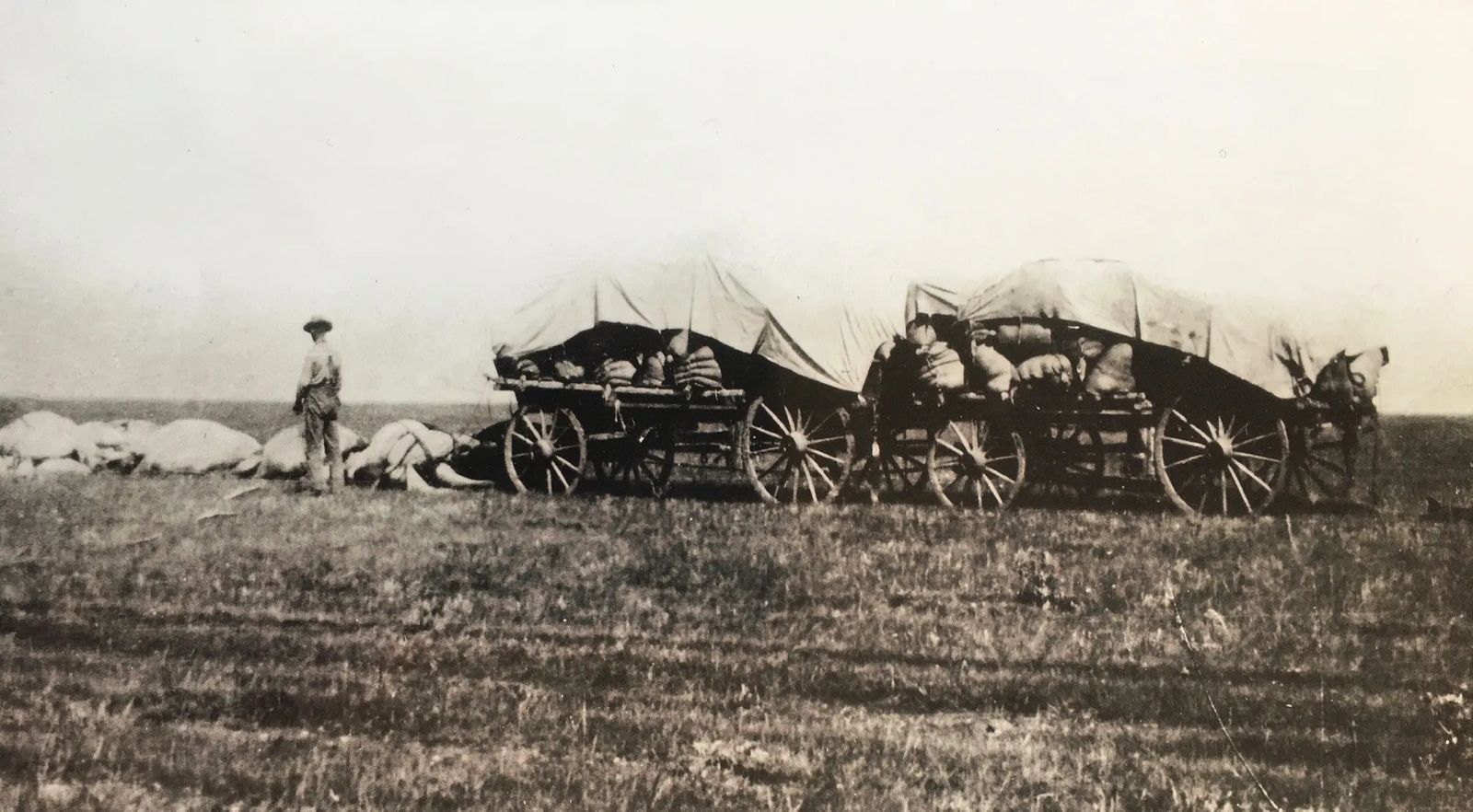 William I. Hughes, a respected Stanford area stockman, is best remembered for proving his personal worth as well as his ability as a rancher. He accomplished this by building his Judith Basin ranch from his homestead on Willow Creek; managing his land and its resources and developing a quality herd of cattle, horses and other livestock; and being a community-minded citizen and organizer.

William I. Hughes was born January 6, 1870, to John R. and Catherine (Moore) Hughes in Windham County, Vermont. In 1892, inspired by tales of Montana by returning neighbors, he left the family farm to see the vast western territory. His brother-in-law Edgar Hamilton, owner of the Sage Creek Sheep Company, offered him employment. He spent his first Montana winter hauling hay and remarked that his rations were “biscuits, beans, pork and antelope.” The Willow Creek region of the Judith Basin captured his interest because of the abundant grass and running streams. The following year he purchased a homestead with a log cabin and stables. By 1897 he lived there permanently. A ranch home was completed by 1901 using the design of the family home in Vermont. He was able to purchase adjoining land from homesteaders and by 1930, he was running a magnificent ranch.

William first purchased crossbred Shorthorn cattle along with their brand, which is still used on the ranch. In 1898 he shipped cattle to Chicago, Illinois. They were driven overland across the Missouri River to Kershaw, a Great Northern railroad station north of Fort Benton. The round trip required 25 days. He continued to ship cattle to Chicago for thirty consecutive years. In 1911 he purchased 250 head of ‘cheap’ cattle with Ed Hamilton. In less than a year, half of the animals were dead as their dairy breeding was not hardy enough for Montana winters. In 1913, William and Amby Cheney purchased southern Texas longhorns that could handle the conditions of the northern range. By 1919, he had 800 head of cattle.

In a letter to his family in Vermont dated March 22, 1908, he wrote, “I did not get my grain thrashed until November. We had a thrashing here, 2890 bushels of oats, 1100 and more of rye, wheat and barley. It was a wonderful season here. I had 5 acres of spuds-over 600 sacks and five to six tons of cabbage, carrots, beets and rutabagas and a wagon load of parsnips. I rented the B.E. Stack last season and a wonderful crop there—over 300 tons of hay. Sold 200 tons last fall. I have about 100 tons of hay here at home. It was worth $10 in the stack last spring—it is worth from $18 to $22 per ton in the stack now.” He went on to say, “We use 1 beef and sometimes 2 a week and one hog. I have fifty steers that are good beef and 16 big hogs and some pigs, one sow, over 300 hens and one turkey. We get 12 to 13 dozen eggs in a day. I have the biggest bunch of cattle I ever wintered. I bought the Cook ranch last June and the cattle and horses. I bought the Parkins ranch in October 1906. I had the offer of all the land on Willow Creek below here. The Stack ranch I will rent for the same as last year, $500. I have been delivering coal to John G. William Coal Exploration Company. They burn from 7 to 9 tons every 24 hours. I just got my check from Williams for $1485 for one month. I have bought 3 teams this winter and had 4 before.”

William had a good horse named Blondie that he rode for more than 18 years. This horse was good for long travel, roping and cutting cattle. When business matters meant a stay of several days in Lewistown, 45 miles away, he turned Blondie loose, and she’d be standing at the home corral before sundown. He would ride the stagecoach home to Old Stanford.

He devoted part of his time freighting to Great Falls and Fort Benton. He negotiated with woolgrowers to haul wool to the nearest shipping point and return with commissary supplies, building materials, wagons and barbed wire. In July 1901, a thunderstorm came up while William was hauling wood. He stepped off the front wagon, tied his lines up on the brake handle and was putting on his slicker when a bolt of lightning struck. It stunned him, killed all eight of the team of horses and his saddle horse, tied behind the wagon, or so he thought. Upon returning the next morning, Old Nellie was standing - staggering when she moved but standing. His 1893 saddle had the wool lining burned off.

Coal mining started on the ranch in 1901. William employed a few miners to dig beneath the cap rock to get the hidden mineral. Wheelbarrows were first used to carry the diggings from the hole. Tracks were laid and coal cars used. The mines shut down in 1942. William said that he diversified to meet any emergency that can develop on a ranch.

He was instrumental in organizing the campaign to take down the legendary White Wolf. The Hughes ranch was one of the hardest hit in the area, loosing sheep, cattle and horses to the elusive yet oddly respected wolf. William was also one of the founders of the First National Bank of Stanford.

In 1902, William married Helen Hughes, a teacher from Nebraska. They had six children: Gerald, Marguerite, Harley, Walter, Curtis and Helen. William and Helen helped create the first school district where he served on the school board. They hauled lumber and shingles to build the schoolhouse on the ranch which neighboring children also attended. After attending college, Gerald, Harley and Curt lived on and worked the ranch. William died in 1954 and Helen a year later. In 1971, the ranch was divided among family members. In 2008, multiple ranches are operated by William I. Hughes’ grandchildren. Granddaughter Betty (Hughes) Sampsel and grandsons Harley, Gordon and Tucker Hughes live on and work the ranches today.

Mr. Hughes was recognized as a leader in Judith Basin County because of his good and careful management of the land and its resources, his community-minded spirit and skill as an organizer. William had a reputation for “strict business integrity, honor and duty first in all things.” He saw the Judith Basin when it was wide open with lush grass cover and the stage coach replaced by the railroad and automobile. Today the ranch reflects his foresight and good stewardship of the land. The native grass stands tall, and the streams run clear.