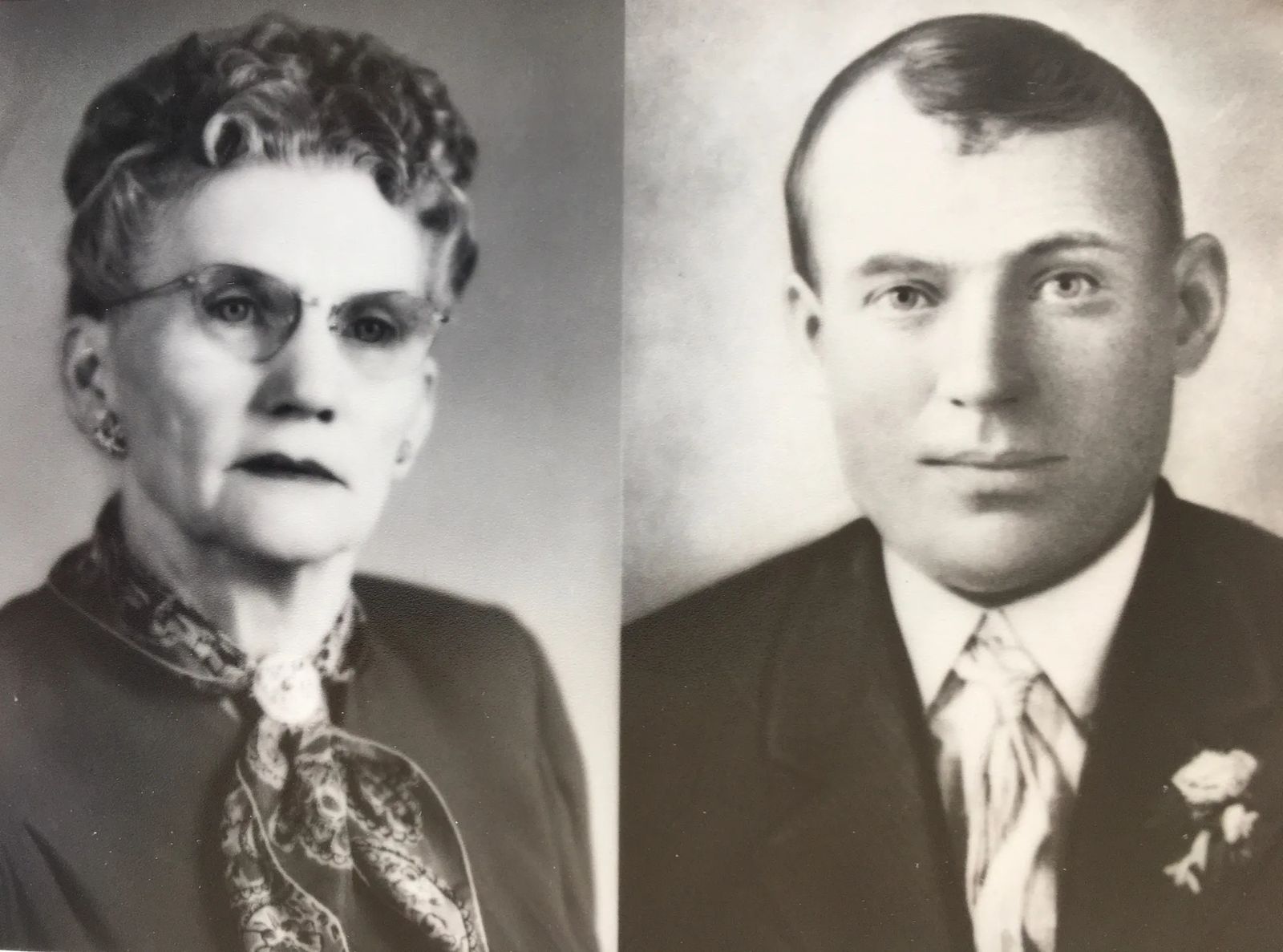 Daniel Haughian was born in 1877 in Northern Ireland. As a young man, he traveled to Cape Town, Africa, to work in the diamond mines. From there, he sailed to Yakima, Washington, where he soon engaged in the sheep business. While in Washington, he heard about the wonderful sheep country of Eastern Montana. He soon moved there and settled near Little Sheep Mountain, north of Miles City, Montana.

In 1905, Daniel went back to Ireland and married seventeen-year-old Susan Quinn, a childhood friend. They returned to Miles City in the fall. Dan hired a team and lumber wagon and filled it with grub. Susan soon found that “grub” meant beans, peas, ham, bacon, canned milk and fruit. As they left town on the trip of sixty miles, Susan kept looking for the main trail, not knowing that the wagon track they were following was it. When they arrived at the base of Little Sheep Mountain, there stood a three-room log cabin, corrals, and sheds located near a spring. Several of the sheep wagons she was soon to become familiar with were in the yard. In the coming years, Susan and her children would camp in a sheep wagon when trailing the sheep to the public pens at shearing time.

Dan and Susan always worked together. Some of Susan’s best memories were accompanying Daniel to the many sheep camps on the ranch. They would check on the sheepherders and stock the sheep wagons with food. Susan would bring her pan of bread dough, work it down on the way, and then bake it at one of the camps. The herders were not used to seeing a woman in camp. Susan liked to get away from the house, and both she and Dan liked to visit neighbors and see new country.

Daniel and Susan had numerous worries and struggles during the early years. Raising a large family many miles from town, enduring the heartbreak of losing sheep to blizzards, predators, or wet rains or snow after shearing, and depending on horse and wagon for travel over rough or muddy roads were some of the obstacles. Coping with weather, grasshoppers, drought, and financing were other hardships they endured. Through it all, they never lost their good humor or faith.

At first the range was wide open and free to use. They bought up land when the homesteaders moved on, and, by 1931, had a decent little ranch and band of sheep.

Daniel was a gregarious man of action and energy who taught his children to be zealous in business engagements. He passed away of cancer in 1931, leaving Susan and their ten children alone, right at the beginning of the “Dirty 30s”. On his deathbed, Daniel told his children “take care of your mother and keep your word good.” The family pulled together under Susan’s leadership. She was a good businesswoman who sought opportunities to keep the ranch going. Because of the lack of grass and water, they had to lease pasture. They went west to Helena one year and north to Sand Springs another year. Wherever they went, Susan was there to help with details such as leasing springs, meeting with bankers, finding feed for the animals and feeding her family. She always knew they could get through bad times as long as the family worked together.

From Susan’s earliest days of stewardship, she started acquiring springs and abandoned homesteads near the home place. Her passion for land drove her to purchase land before purchasing livestock. She considered it a good business; therefore, she became “the banker’s darling.” In 1932, Susan and her sons pooled their livestock and called the operation Susan Haughian and Sons, later renamed Haughian Livestock Company. At one time, Susan was rated the most prominent woman sheep and cattle operator in Montana.

After the tragic Milwaukee train wreck at the mouth of Custer Creek, the Milwaukee Railroad changed the name of the nearby railroad station from Saugus to Susan, in honor of Susan, who with her sons owned the land.

Susan moved into Miles City in 1945 after her sons began getting married and raising families. She continued as the ranch bookkeeper and was a frequent visitor at the various ranch homes. Her sons continued to respectfully seek and appreciate her advice. Everyone was welcome at her home, sheepherders and bankers alike. She loved to entertain, serving her homemade Irish soda bread and tea. She was very involved with agriculture organizations, as well as social and religious clubs. Among her affiliations were Woolgrowers, Stockgrowers, Cowbelles, Range Riders Reps, Caledonian Society, St. Thomas Aquinas Club, Altar Society, Sacred Heart Parish, Soroptimist Club, Half Century Club, and Toastmasters. She was featured as “Montana’s Favorite Redhead” in the Collier’s Magazine in 1952. Dan and Susan were inducted into the Range Riders Hall of Fame in Miles City.

When Susan died in 1972, she had 45 grandchildren and 24 great-grandchildren. She passed on to them her strong religious faith, the importance of family and of working together. Susan and Daniel were Irish-born Montana pioneers whose legacy has passed down to the generations after them. The original ranch on Custer Creek, as well as several adjoining ranches, is still owned by the family.

They Came to Montana: Homespun Tales of Billing and Haughian Families. 1984