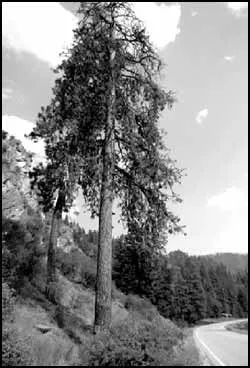 The Medicine Tree is prominent in the traditional stories of creation as passed down by the Salish. This is the story of a great medicine man named Coyote who traveled the land destroying evil monsters to prepare the earth for human beings who were yet to come. One day Coyote was told of a giant, evil bighorn sheep in the Bitterroot Valley that would kill anything that passed by. Coyote told everyone that he would kill the creature. When he met the ram, Coyote asked him to show how powerful he was. Coyote pointed at a small pine tree and said he wanted to see him break it down. The ram could not resist a dare and would show off his strength.

The ram thundered toward the little tree and crashed into it with his giant horns. One horn went all the way through the tree and stuck out the other side. As the ram struggled to free himself, Coyote cut his head off with three quick strokes of his knife. Then Coyote, standing next to the little pine, declared victory over evil and said:

In generations of human beings to come, there will be no such wicked

creatures. This tree will be a place for human beings to leave offerings

being, for good fortune and good health. Those who are not sincere and

serious in making their wishes will have misfortune and even death.

A towering ponderosa pine, more than 300 years old, is a central figure in the traditional creation stories of the Salish tribe. Serving as a place for tribal members to pray to the creator for loved ones and to give thanks for good fortune and good health. The Medicine Tree has become a place of peace and prayer to many more than the Salish. People from around the world have come to the sacred tree to pray and heal. The Salish believe we all serve one God. They use places like the Medicine Tree to pray because it reaches up and brings them near the Creator. Over the centuries, many tribes have worshipped at the Medicine Tree. It has been said that Chief Joseph of the Nez Perce sent his medicine man to the sacred ground to pray for guidance on many occasions.

The Medicine Tree’s significance will live on. Shortly after a storm blew the ancient tree down in 2001, pine cones were retrieved to collect seeds to plant and grow a new tree … a descendant of the Medicine Tree. Today, all but a 16 foot snag of the tree is gone. Tribal leaders have decided that they will leave the snag standing as people continue to leave offerings and pray on the sacred site. The Medicine Tree is an important part of the history of Montana and its people. The sacred site will continue to play a part in our collective Montana culture for years to come.