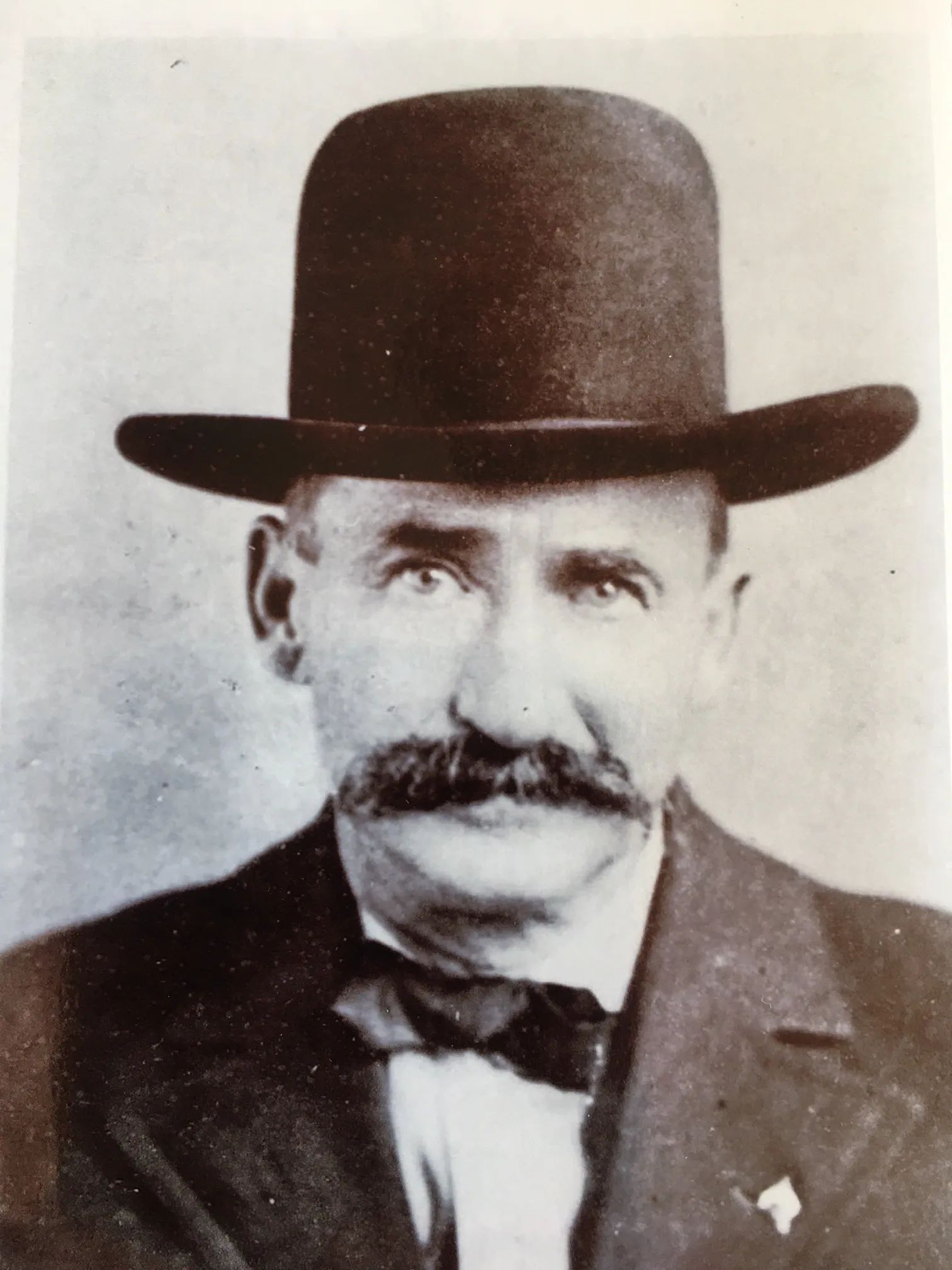 Harry Rutter was a cowboy. He lived his life by the rules of the range: integrity, fair play, loyalty to friends, honor, respect for authority, and respect for women. He loved the eastern Montana range. From the moment he first saw the Milk River in 1885 until his death 54 years later, he lived as a stockmen, lawman, civil servant, and community builder. “Perhaps more than any other one person I have met since coming to Montana, Mr. Rutter typifies for me the pioneer character, endless energy to surmount difficulties, and lovable optimism that has enabled him to enjoy doing it,” said Georgia Reckert, who edited his story COWTALES in 1931.

Harry’s family left their home in Virginia in the decade before the Civil War for Indiana, where Harry was born in 1858. He was orphaned at two years of age and grew up as a beloved son of a cousin. The family ranched in Wellington, Michigan where Harry attended school. At Howard, Kansas, Harry helped a widow manage her ranch until a son was old enough to take over. In 1877, at age 19, Harry made his way to Texas. He worked for the Addington Brothers, Hunter Evans & Hunter, and the LX Bar ranches. During these years he trailed herds for delivery to Indian agencies and to rail points for shipping. In 1883, at Cimarron Crossing, he joined a herd delivering to Pine Ridge, South Dakota. He left Pine Ridge with a four mule team to winter at Deadwood where he joined the N- ranch with whom he later came into Montana with the renowned 1884 N- trail herd. Harry tells of this in COWTALES.

Harry first saw his beloved Milk River Valley in the spring of 1885 when the N- sent him north to scout for grass. He said, “I explored the Milk from St. Mary’s to the mouth and returned to report as fine a grazing country as could be found.” In 1889 Harry went to work as range foremen at age 31 for the N-N that put 30,000 head of cattle on Rock Creek in Valley County. At Snow Creek, Harry and his crew collected horses to break. Harry stated that breaking horses was his long suit and that his boss must have been satisfied as he gave him fifteen of the choice horses. In 1891, Harry was trail boss for a crew that took 1,600 horses to Windoor, Wyoming and brought back 30,000 head of cattle on the return. Harry was a wagon boss for the old N-N outfit for several years.

Famed cowboy Teddy Blue Abbott said, “In 1883 I saw Burgess and Harry Rutter water 2,000 head of cattle at Skunk Springs. It was the slickest piece of cow work I ever saw in my life.” Teddy also said that he had Cowboy Anne’s ruffled drawers on a forked stick on the wall of his cabin, until Harry Rutter got sore one day and throwed it into the stove. Harry said it wasn’t decent. Teddy Blue described Harry in 1883 as a classy looking cowpuncher with good clothes and a white handled six-shooter.

When the N-N went out in ’97, Harry Rutter filed on a homestead on the Milk River and partnered with the Harrah Brothers and Jim Stevens, all N-N men. They purchased Prince Ged, a Percheron stallion and ran the mares along the unfenced Canadian border. The horse ranch was paying well because of the increasing demand for broke horses in the newly settled agricultural areas of the Dakota’s and Montana. Harry’s dreams of a horse ranch died with the drop in the market for horses when the homesteaders turned to tractors and the U.S. Army mechanized after World War I.

After twenty-two years of cowboying and at age 41 he married Miss Elsie Clough in 1899. They reared their three children at the ranch and in Glasgow until 1913 when he was appointed Hinsdale Postmaster. He served as such until 1922.

While operating his ranch, Harry Rutter served as the undersheriff from 1894-1911. Since the country was still alive with cattle thieves and train robbers, Harry described that job as “a lively and absorbing affair.”

Art Jordan tells of Harry’s role in the ‘1903 Jailbreak’: “Harry Rutter stepped into the corridor, where he was instantly attacked…Rutter had a fierce fight on his hands; he had Brown on the floor and was beating his head with the butt of his revolver while Pierce, who somehow had secured a brick beat Rutter over the head several times before he lost consciousness. It was a severe fight that showed Harry Rutter’s mental attitude. He could have shot the two men in seconds, but he preferred to battle it out without killing. As Rutter regained consciousness and staggered to his feet, Brown entered the cell and pressed the muzzle of his rifle against Rutter’s stomach. ‘I’ve got you just where I want you Rutter; you’ve given me trouble enough’ said Brown. Rutter answered, ‘Why don’t you shoot, damn you and get it over with?’ Brown backed away, saying, ‘No, I couldn’t do it, you’ve got too much guts.’…Of the officers that helped to suppress outlaws in northeast Montana, Harry Rutter stands out among them all. He deserves more credit than he ever got.”

His role in the community shows many involvements. In 1907 Col. Harry Rutter appeared as the Parade Marshal for the third of July. He attained a high degree in Masonry (32nd) and joined Glasgow #17, then the Hinsdale Kyle Lodge #96 where he was a past Master. Harry belonged to Glasgow Commandry #13, Algeria Temple and the Helena Shrine. In 1913 he was a Valley County Commissioner. In 1915, Harry served on the Rock Creek school board. In 1916 Harry helped finance building the church, and in 1916 was an organizer and director of the Hinsdale First National Bank. In 1917 he promoted the organizing of the Rock Creek Canal Company to irrigate 9,600 acres and served for many years as its secretary and treasurer. In 1918 Harry received a letter from a soldier asking for recommendation from ‘someone with good standing’ so he could get into officers training. He cast his first vote at Stacey, Montana for Grover Cleveland and remained politically active for the remainder of his life. In 1923 at age 64, Harry went to work in the auto license department at Montana State Prison. In 1936 he returned to Hinsdale as assistant postmaster for his son, Stubbs.

In 1938 Harry returned to his beloved Milk River Valley and died in January of 1939. He was followed in April by Teddy Blue whose tribute to his old pal Harry Rutter ended with: “Harry has left the wagon and gone ahead to a new range, but I doubt he finds one that looks any better than Montana did when he first saw it in 1884. One day on herd Harry says to me, ‘this is sure a fine range; good water; plenty of grass and shelter; Montana looks good to me.’ There were two of us that stayed for fifty-four years.”