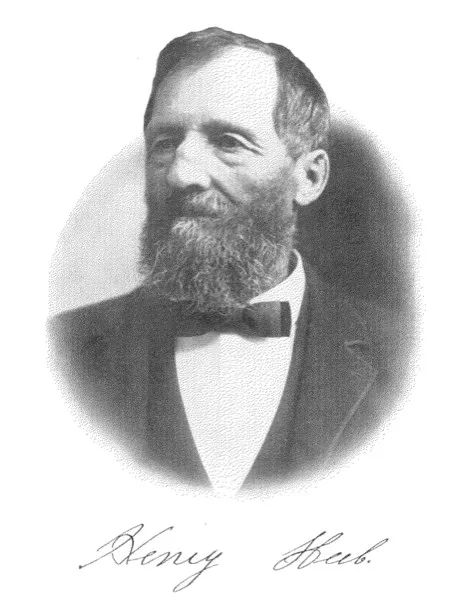 Henry Heeb, one of Montana’s progressive men, was born in Buck’s County, Pennsylvania, in 1835. He farmed there and learned the bricklayer’s trade with his father and brother. When he came of age he moved to Leavenworth, Kansas, again working as a bricklayer and plasterer.

During the Pikes Peak excitement of 1859, Henry joined the stampede along with a business partner by the name of Babcock. Their business was that of hauling freight to the new gold fields. After arriving in the gold fields, the partners laid brick and mined. Henry remained in Colorado two years.

In 1862, Henry hitched up his freight wagons and headed north to Montana. He arrived in October. He freighted around Virginia City that year and in early 1863. In December of 1863, he moved to the Gallatin Valley to pre-empt a quarter section of land. He prospected in several areas but did not discover any promising leads until, while on a freighting trip to Harrison, Montana, he discovered the “Pony Lead.” He mined there and continued to freight between Bozeman and Virginia City. Due to a “consolidation” of mining claims, Henry was frozen out of his mining interests by several partners. After that, Henry retired to what would become his life-long farming and ranching project.

Henry journeyed to Salt Lake City in the fall of 1864, to purchase barley and oat seed, which he planted in the spring of 1865. On this same trip he brought back a Percheron stallion, the beginnings of his extensive horse breeding business. In 1863, Henry and several other farmers and ranchers had filed for irrigation water on the Gallatin River. Henry held the No. 1 water right in the Gallatin Basin. During the year 1864, Henry had purchased more land, growing his holdings to 1,400 acres.

Henry raised horses for the freight and stage lines running from Bozeman to Virginia City. His horses were a mix of Percheron and Thoroughbred for the stage lines. He purchased foundation mares from the Meadow Brook Ranch west of his property. The draft horses were the result of breeding the Percheron stallion to local heavy mares.

Due to the influx of mining and new settlers coming into the Gallatin Valley, the horse breeding business flourished. Henry had as many as 300 at a time. His horses and farming talent soon brought him fame and prominence. When investors from the Manhattan Company viewed the area as fertile ground for their malting company, the availability of horse power and seed stuff helped settle their plans. In the ensuing years the Manhattan Company became the Manhattan Malting Company. The malting company helped several new Dutch immigrants move to the area, as they wanted farmers to raise their barley. Henry looked at the project as the opening of a new market for his horses and crop seed.

As the Dutch farmers unloaded their goods and started their homesteads, Henry would loan them a team, wagon and enough seed to plant their first crops. They were to make payments on their loans the next fall. By supplying that much-needed beginning, Henry helped grow the farming interests of the Manhattan Company, the Dutch immigrants and the little city of Hamilton. There were soon farms sprouting all along the western fringes of the Gallatin Valley, scattered with horses branded with the quarter circle H on the shoulder.

My grandfather, Henry’s son Buell, related several stories of farmers returning a horse they could not handle. Henry would hitch the offending horse to the Percheron stallion, hand young Buell the lines and have him drive the pair off as the farmer watched. The rebellious horse often complied simply because it was intimidated by the stallion. The farmer would then return home with the horse, saying, “By golly, if that little kid can handle old Spud, I can too.”

Cattle also provided revenue for Henry, as the miners needed beef. Henry ran his cattle and horses together on the west side of the Gallatin River. He drove the cattle to market in Bozeman or Virginia City.

Fearing that their young ladies could be wrongly influenced by the lack of formal education in the area, Henry and several neighbors founded the Gallatin Valley Female Seminary. Henry donated the land and some of the building materials for the school and the church offering Presbyterian fellowship. The congregation helped head the school and provided teachers. Young ladies from the surrounding areas boarded there during the school year. The Heeb family supplied the school with meat and garden supplies, as well as buggies and horses to pull them.

Henry also donated land and material for a public school building, called the Heeb School and land for the Hamilton Cemetery on a bluff above Camp Creek. It is a fitting venue, providing a view of the surrounding river valley and farmlands to the four compass points.

One year during the June melt, Henry Heeb very nearly came to rest in his donated cemetery. He was crossing Baker Creek on the Virginia City road when the bridge collapsed from the high water flow. Henry, his 4-horse team and a load of heavy logs were dumped into the swollen waters. His horses drowned, but Henry managed to save himself by clinging to the willows along the stream.

A prolific investor and giver, Henry was instrumental in the establishment of the McKay Hardware in Bozeman. He loaned Harry McKay money to purchase a lot and building materials. The McKay Hardware is still in business today as Owen House Hardware. Oddly, it would be this investment that would be related to Henry’s own death.

One afternoon while visiting with Harry McKay on a street corner in Bozeman, Henry was struck by one of the few cars in town. The woman driving the car dragged Henry several feet before stopping. This accident damaged Henry's kidney. Henry and Margaret traveled to San Francisco seeking medical care. They were there during the San Francisco Earthquake of April 12, 1906. While the Heebs were unhurt, their bed did skid across their hotel room.

Henry Heeb passed away on January 16, 1914. He was laid to rest in the Hamilton Cemetery, now called Meadowview.

He had provided land, livestock and seed to start the immigrant Dutch population with a foothold in Gallatin Valley. Their descendants are still rooted on those farmsteads, providing our community with rich agricultural heritage. Henry’s cemetery is still providing rest to the souls of our area. The land he settled on is still farmed by the family and they still drive draft horses. The Heeb School is closed now but lives on as a rural residence. The Gallatin Valley Female Seminary building is a country home; the barn there still shelters horses. The Presbyterian Church of Hamilton fell into ruin one blustery day in February 1959.