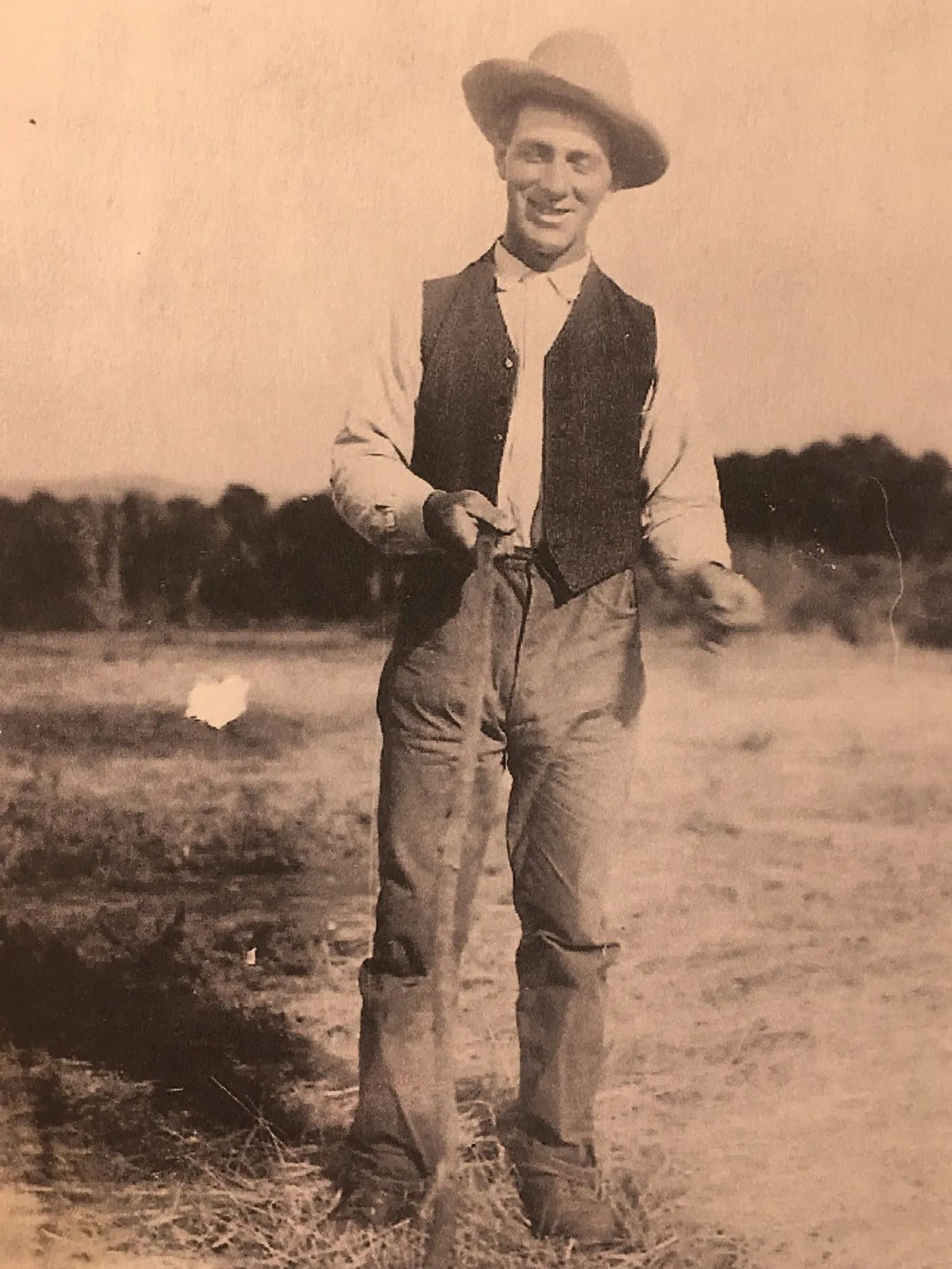 John Frey's parents came to the United States from Germany. John was born in Minnesota in 1877, and when he was very young, his family moved to Two Canon, near Sprague, in Washington State. The family moved all their worldly possessions in rented railroad cars. That inventory included machinery, cattle, and household goods. John and his brothers rode with the cattle during the long trip to provide necessary care for the animals.

John's education ended with the fourth grade. He was needed to help with the family farming operation. However, education was very important to him, and he became an avid reader of history and Western novels by Zane Gray.

When John was 17, he and a friend trailed a herd of horses to Montana from Washington to fill an order from the US government to provide horses for the cavalry at Ft. Shaw, Montana. He liked the Montana landscape and stayed near Great Falls and Helena. He worked on several ranch roundups in the Sun River and Cascade area, including at the Dan Floweree Ranch as a horse wrangler.

He met and soon married Mary Phoebe Payne, a young woman from the Augusta area. They wed July 1, 1900. He worked as a brakeman for the Great Northern Narrow Gauge Railway between Great Falls and the Canadian border. Another way to feed his growing family was to deliver coal in Helena, and he was hired to work on the York Bridge spanning the Missouri River.

The Frey family homesteaded in 1905, near Hogan (Augusta). Three of five daughters were born on the homestead. John and Mary also raised a grandson who came to them as a newborn baby after the death of his mother in childbirth. A strong, gentle man, John stood 6'3" and seemed like a giant to his grandchildren.

The family grew prized Hereford cattle, hay and grain. John believed in balanced, healthy meals. For survival, the family planted, cultivated and harvested a 2-acre garden. Mary canned vegetables and meat and stored the produce in a root cellar. Potatoes, carrots, cabbages, and onions - and on occasion, homemade root beer - filled the shelves.

In 1949, John & Mary Frey retired. In 1950, they celebrated their 50th wedding anniversary. They traveled throughout the West until Mary's death in February 1952, at the age of 74. Since the death of John Frey in 1965, at the age of 88, the ranch has remained in continuous operation by family members, currently third and fourth generations.

John was a charter member of the Montana Stockmen's Association, and in 1955, he received the coveted honor of "Outstanding Member" for his ranching practices and his accomplishments in raising Hereford cattle. He was also a member of Modern Woodsmen of America Lodge, and he helped build Stearn's Hall, which serves even today as a community meeting place.

Very progressive in his thinking and farming practices, John bought the first tractor in the Augusta community. He could be counted on to help his neighbors in any circumstance that arose, whether bringing in a crop, acting as a veterinarian, or raising a barn lost in a fire.

His family recalls fondly how John loved his horses. He would walk two miles to catch a horse just so he could ride it one mile!

The life of a cowboy seems glamorous as we read about John's past, but his prematurely aged, leathered face and his lean body gave testimony to his hard life.