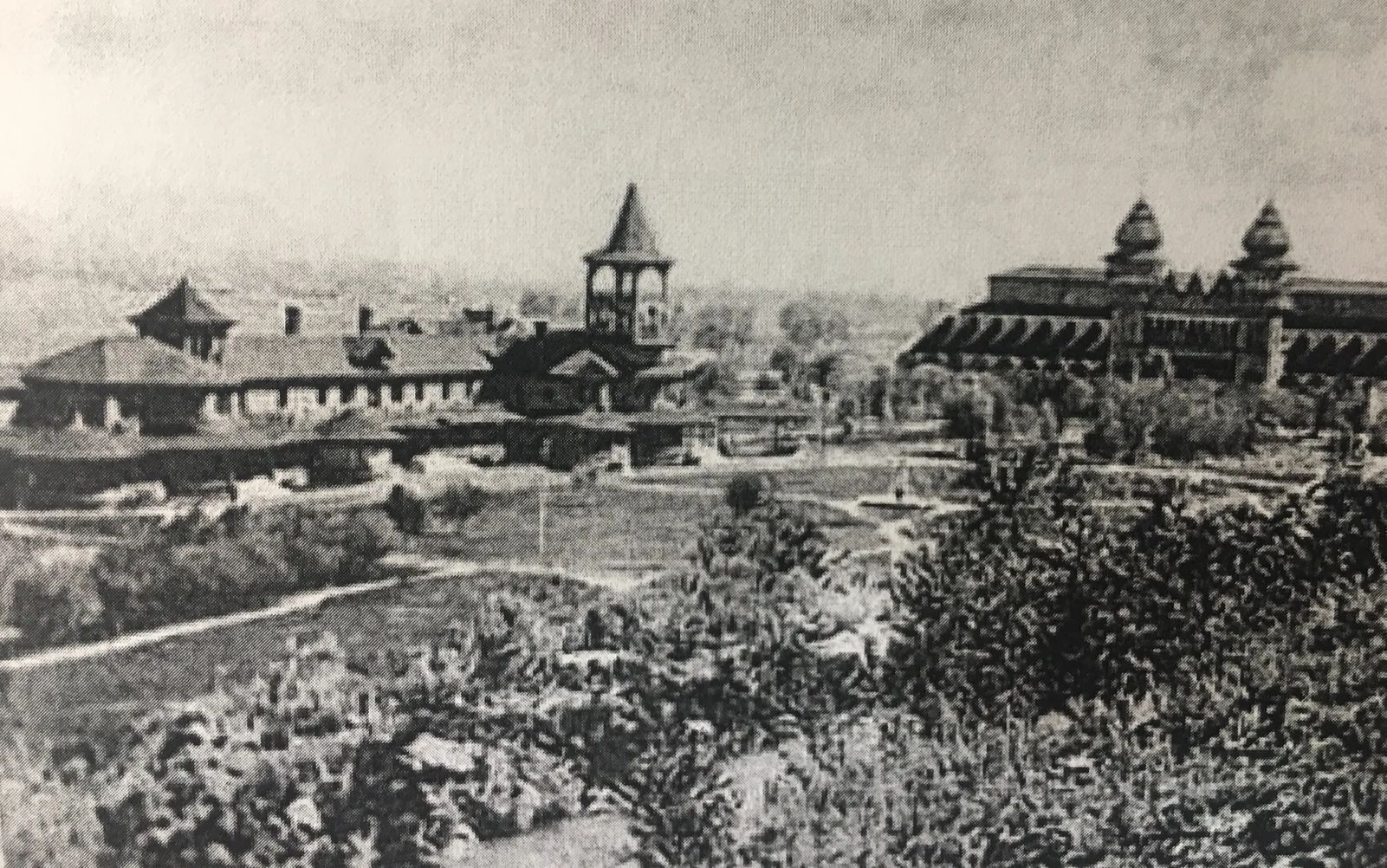 More than 100 years ago, the citizens of Helena, Montana Territory enjoyed a brief but exciting recreational area known as the Broadwater Hotel & Natatorium, located west of the outskirts of town. Thanks to the visionary actions of philanthropist Colonel Charles A. Broadwater, children and adults frolicked on manicured lawns kept trimmed by flocks of sheep, or they sprawled lazily on the grass listening to free band concerts. Every day, fancy French seven-course meals were offered to the visitors. Advertisements touted that the "largest covered plunge in the world" awaited guests who wanted to swim in sparkling clean, naturally warm waters.

The dreamer and builder of this magnificent playground, Colonel Broadwater was a man of many accomplishments, although he claimed he held no particular profession. A very young Broadwater arrived in Montana Territory in the early 1860s and recognized the need for supplies to be freighted into Virginia City, a booming gold town. He started a freight company that brought fresh vegetables and meat to the mining camps.

Broadwater matured with his business activities, setting up market places in towns that were springing up faster than mushrooms after a heavy rain. He focused a guiding dedication toward the people of Montana and particularly to those residents of Helena. He was a shrewd and respected businessman and became prominent in financial circles. His reputation for fairness spread wide and far.

During the 1880s, Broadwater became president of the Montana Central, a branch of the Great Northern Railroad. He planned to use the railroad as the means to bring vacationers from eastern states to the Helena area and to his yet-to-be-built grand hotel.

The dream hotel demanded only the best be used for material, and Broadwater spared no expense in the construction of his fantasy. By 1888, he had spent $500,000 to make the finest health and recreational park in Montana Territory.

The whole concept – not only the hotel but also gardens full of flowers and trees, spirited horses for rent in the stable, white swans floating on the man-made lake sharing space with brightly colored boats, tennis courts, elegant dining facilities, rooms with gold doorknobs, health baths and a wonderful swimming pool – awakened to reality on August 26, 1889, the awaited grand opening finally occurred. The cooks prepared a 38-course meal that took the over 500 guests more than three hours to eat. Dancing and fireworks in the evening finished off the perfect day.

A Moorish-styled natatorium now graced what had once been only wild land outside of Helena. The swimming pool was 8 foot deep at one end, measuring 100 feet by 300 feet. Natural 160° hot springs water, cascading over a 40-foot, man-made granite rock creation, mixed with cold water, as swimmers floated by. Many stained-glass windows lined the “plunge” on long-sided walls and reflected colors into the clear water. Imported palm trees added to the feeling of luxury.

Helena, blessed with a growing population very cosmopolitan. Because of the ever-producing gold mines, more millionaires lived in the Helena area at this time than anywhere in the United States. The citizens welcomed the Colonel's new playground. Many happy hours were spent attending wedding receptions, formal garden parties and catered Sunday picnics. Every Wednesday evening during the summer, the famous All Negro Army Concert Band from Ft. William H. Harrison entertained with free concerts to lawn-sitting audiences.

Broadwater soon discovered that for the facility to be financially solvent, it needed a far wider audience. Broadwater printed and paid for advertisements splashed across the finest newspapers in the East. The hotel and natatorium professed itself a health spa. Soon Easterners from Chicago, Boston, New York, and elsewhere vacationed at the hotel, bathing in the natural hot springs and hoping for the cure-all to their ills. Reservations made on the Northern Pacific Railway cost $60 round trip, and one could stay indefinitely at the hotel for $3 per day.

Three years after the grand opening, on May 24, 1892, after returning from a stressful trip to New York City, Colonel Broadwater succumbed to influenza. He died in his Broadwater Hotel suite at the age of 51. Again, the hotel burst at the seams. This time it was to house the people who came to attend his funeral. Over 5,000 men, women and children lined the funeral processional route and wept as the horse-drawn carriage brought the philanthropist and visionary to his final resting place in Helena’s Forestvale Cemetery. To this day, his funeral cortege holds the record for being the largest funeral ever held in Montana.

After Broadwater's demise, the future of the hotel was placed in jeopardy. The hotel and pool continued to operate, but ownership changed hands many times. In the 1930s, earthquakes destroyed the underground hot-water-pipe system and the concrete plunge sprung a leak. The hotel closed and the property was again put up for sale. A new owner opened a restaurant and put in a dance floor. Gambling became the featured attraction. But toward the end of the 1940s, because of gaming laws, the establishment was shut down for good.

Eventually a fellow by the name of Norman Rogers purchased the buildings and grounds for $25,000. Immediately signs reading "No Trespassing!" decorated every fence post strung with three strands of barbed wire surrounding the grounds. Deterioration took its toll on the hotel and weeds overtook the once-immaculately groomed flowerbeds. As far as the passerby could tell, the grounds remained devoid of all activities. Townspeople speculated as to what would happen to the grounds. Rumors spread that the city of Helena was going to refurbish the natatorium. No one was ready for the headline splashed across the top of a 1974 “Independent Record,” which reported that in September of that year the hotel building was to be demolished, and a two-day auction would be scheduled.

Mr. Rogers agreed to allow the public one last walk through the elaborate grounds, and the Helena Symphony Society, as a fundraiser, offered a quick peek inside the hotel for the price of a two-dollar ticket. Thousands lined up to take their turn inside the hotel.

Grandeur of another time and place, from Helena's once-illustrious Victorian era, greeted the onlookers. There were hand-turned spindles made from imported German woods, and Austrian crystal chandeliers still swung from the high ceilings. Hundreds of hand-painted stained-glass windows from German artisans greeted the visitors. There were trays of dinnerware and silverware stamped with the Broadwater crest, and silver trays and bowls overflowed the tops of ornate marble tables. Washbasins and beds removed from the hotel bedrooms lined the hallways.

The 1974, auctions, attended by thousands of people from all over the United States and foreign countries, successfully ripped apart the three elegant ballrooms, staircases and railings, and the fancy flooring. Winning bidders made arrangements to cart away the hotel towers for personal backyard use.

A pall hung over the grounds that September weekend, even though nature provided a perfect Indian summer day. Many of Helena's senior citizens, who had spent happy hours at the hotel and plunge as children, could not bring themselves to stay through the auction. They did not want to repeat the pain and sorrow of burying the Colonel again... this time witnessing the demise forever of Broadwater's magnificent dream.