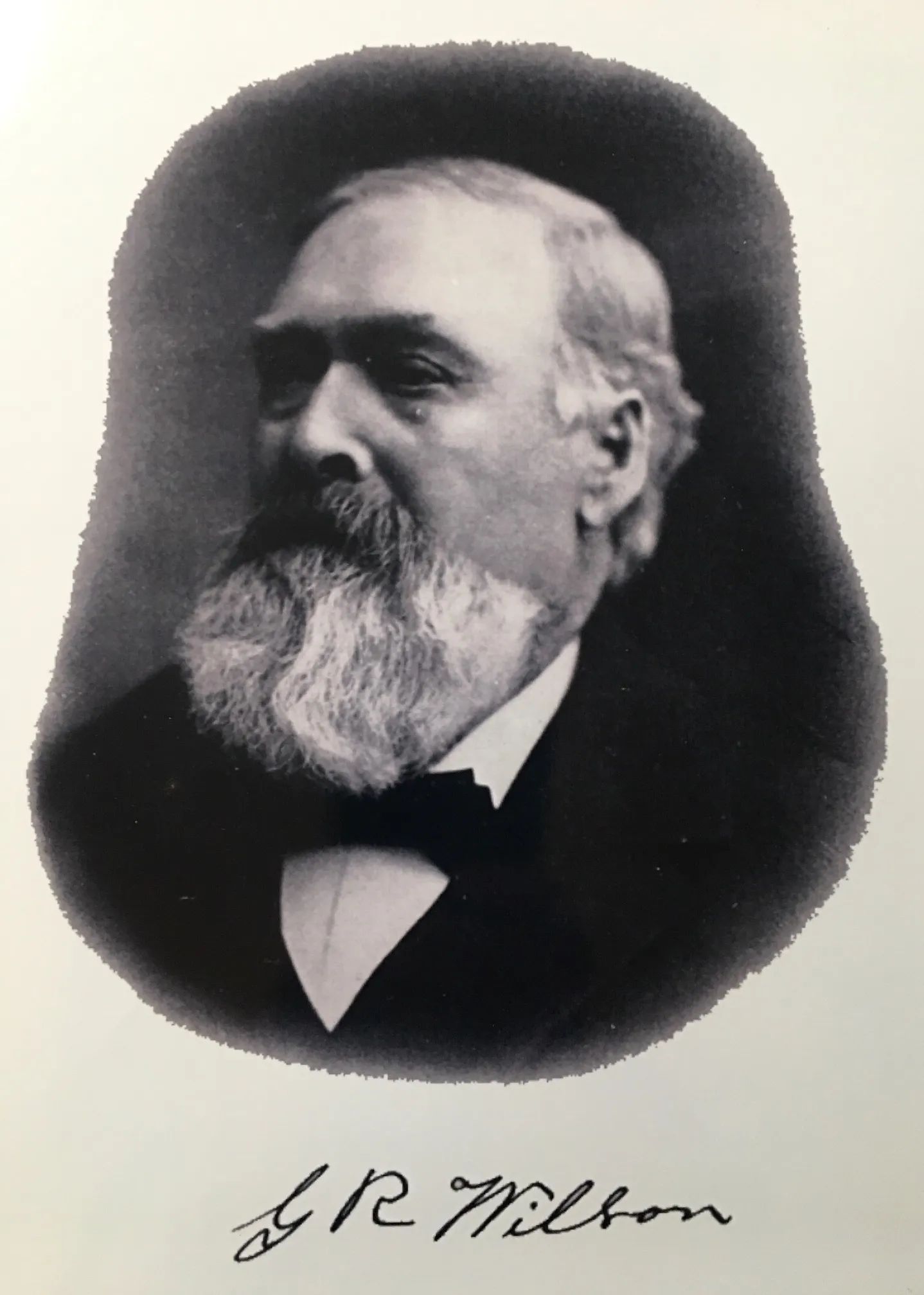 George R. Wilson, known as “Two Dot” throughout Montana, was born in Elmira, New York, in 1830. By the time he was 16 he had become a successful cattle buyer, but the westward urge had intrigued him, and he couldn't be content. He worked his way to Wisconsin, where he stayed for nine years. In 1864, he joined a wagon train for Montana. While encamped on the Powder River in Montana, he and his party were attacked by Sioux Indians. Following a skirmish, three people with the wagon train were dead. The Sioux suffered losses and thus withdrew.

Arriving in the roaring frontier town of Virginia City, Montana, Wilson launched his first business venture by purchasing a yoke of oxen and a wagon, and cut firewood in the hills and hauled it to Virginia City and Helena. When road agents caught him one evening and took his $400 in savings, he became soured on the firewood business. Next he took a job on a cattle ranch for $15 a month. Three months later, he bought a half interest in a gold claim in Alder Gulch, which was just outside Virginia City, Montana. That winter Two Dot saved enough money to buy a claim of his own and hired 30 men to work it. This claim brought him a sizeable sum in a short time. With this profit he persuaded a friend to throw in with him on a cattle-buying trip to Salt Lake City, Utah. Sixty days later they drove their herd into Virginia City and sold the cattle to the meat-hungry miners at a 100% profit.

Five years later, Wilson was well on his way to becoming a wealthy man. His brand, simply two dots, marked his ownership of great herds of cattle, sheep and horses ranging on thousands of deeded acres in Meagher and Sweetgrass Counties. He ran 8,000 cattle, 10,000 sheep, and 500 head of Percheron, Norman, and Clydesdale horses, as well as a herd of good saddle horses.

The Montana town of Two Dot in Wheatland County was named for Two Dot Wilson. There he built a $6,000 hotel which was fabulous for the times, a livery stable, a bank, and a store building. Although Wilson became one of Montana's greatest landholders, he always preferred to be called just "Two Dot," whether addressed by Eastern businessmen, cowpunchers, or sheepherders.

In 1876, he went back to New York and while there married Miss Harriet Salisbury. She was a fit partner for her wilderness-taming husband. During the first two years of their marriage, she handled the chuckwagon at the ranch roundups and cooked for the crew - often for three months at a stretch. She got along well in the neighborhood and became friends with the neighboring Indians. Once, upon returning from a roundup, Two Dot found a large band of Indians camped at his home. Many of Tan Dog's Sioux followers were coming by to sample the pies Harriet was baking for them.

Two Dot was described by old-timers as being a brilliant though eccentric character. His hair and whiskers grew unrestrained. He never wore a hat and never used shoelaces in his shoes as he though too much time was wasted tying the laces. He slept little, ate little and worked by daylight, never by the clock.

Though one of Montana's wealthiest men, Two Dot rarely wore dress clothing. This fact was a source of embarrassment to his punchers and was also the source of a practical joke they played on him in Chicago. After Two Dot and his cowhands departed the cow train and had delivered their cattle in Chicago, he struck out with his men in his old worn-out rags while window-shopping. He had failed to clean up and appeared to be a vagrant. His punchers stopped a policeman and reported that he was following them around, and Two Dot was arrested for vagrancy. When allowed to contact his bank, his banker assured Two Dot that he could bring $100,000 to get him out of his trouble. Since one of the policemen was listening on the telephone line, Two Dot was quickly released without a fine.

Throughout his life, Two Dot always accompanied the train carrying his cattle to the Eastern markets. He would hire a man for each of two railcars of stock. Each man was responsible for using a willow pole or rake to prod the cattle to make certain the animals stayed on their feet. When cattle got down in a railroad car, they were in danger of being trampled to death. This practice is how the name "cowpoke" or "cowpuncher" came about.

According to "Progressive Men of Montana," Two Dot Wilson was an honest, upright man who had a rugged and picturesque manner, two qualities which made him known far and wide in business circles in both the East and the West. He was respected and admired as a genial, generous and social businessman in early-day Montana.

Two Dot passed away at his ranch in 1907, and is buried at White Sulphur Springs, Montana.