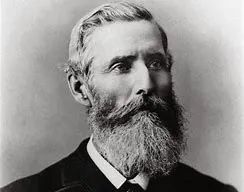 Granville Stuart, notable figure in Montana's early history, was born in 1834 in Virginia. In 1837, the Stuart family left Virginia, landing in Illinois for a time before moving on to Iowa in 1838.

In the spring of 1852, along with his father and a brother, Granville journeyed to the California gold fields; his father later returned to Iowa. In the spring of 1857, Granville decided to return home to visit his parents. On June 14 of that year, the journey home to Iowa encountered an unexpected delay. Brigham Young, president of the Mormon Church, had declared the State of Utah free and independent of the United States. In fact, he had seceded from the Union, and United States troops were sent to squelch the uprising. Because of this, Granville Stuart decided to reroute his trip and headed north to Montana, crossing the Rocky Mountain Divide on October 10, 1857, then spending the winter in the Beaverhead Valley. Granville and his party spent Christmas Day 1857 with Captain Grant at the present-day location of the Grant-Kohrs Ranch.

Granville's trip to Iowa was permanently delayed when he discovered gold at Gold Creek the following year. Gold Creek was located in Missoula County, at that time a part of Washington Territory. He is often credited as the first man to discover gold in Montana. In 1862, Granville moved to the boomtown of Bannack, Montana, where he set up a butcher shop. In 1864, he had his first taste of vigilante action, when Henry Plummer and his gang of road agents began stealing and murdering at the mines. The vigilantes eventually took justice into their own hands.

Granville dedicated himself to public service to the State of Montana through his involvement with the Montana Historical Society. Organized in 1865, Granville served as the first secretary. In 1875, he became the vice-president of the group, and in 1890, was elected president.

Continuing his service to the state, Granville became one of thirteen members of the 1871 Territorial Council. He was a member of the Upper House of the Seventh Session of the Territorial Legislature, which met at Virginia City from December 4, 1871, to January 12, 1872.

In 1880, Granville entered into a partnership with A.J. Davis and Samuel Hauser for the purpose of engaging in the cattle business. Their brand was the famous DHS, with headquarters east of Lewistown. When horse thieves took a toll on residents in the area, Granville once again took justice into his own hands. In 1884 he organized the Stuart Stranglers and led a successful vigilante raid into the Missouri River Breaks. That same year, Granville was elected the first president of the Montana Stockgrowers.

In the latter 1880s, due to the harsh winters and other adverse conditions, the DHS fell upon hard times and ceased to operate. In 1891, Granville was appointed State Land Agent and personally selected some 600,000 acres of land, which the federal government transferred to the State of Montana for the purpose of providing revenue for schools.

Granville was appointed Ambassador to the Republic of Uruguay and Paraguay in South America in 1894, a position he held for five years. In 1916, he was commissioned by the state to write a history of Montana and was at work on this at the time of his death, October 2, 1918, at Missoula, Montana. He was buried in Deer Lodge.

In 1925, Paul Phillips, a professor of history at the University of Montana, using Granville's notes, edited the now-classic book "Forty Years on the Frontier."