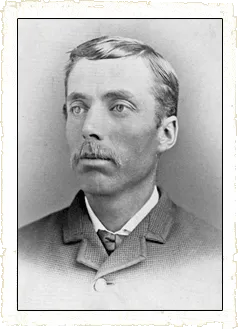 Edward Charles "Teddy Blue" Abbott was born in England in 1860. He came to the United States in 1871, with his parents, settling around Lincoln, Nebraska. Teddy Blue is hailed as one of the greatest of the cowboys who brought herds of Longhorns north from Texas. His charming looks and rebel ways have forever etched him into Montana history.

By the time Teddy Blue came on the scene, the Texas trail had been in existence nearly four years with a steady stream of cattle herds moving northward. Lincoln was at that time the northern end of the trail, as there were no ranches beyond that point. Cattle were abundant in Texas after the Civil War. They had increased in numbers significantly and ran wild while men were away from their homes fighting for the Confederacy, especially along the Nueces River and the Rio Grande area. Cattle were down to $4 a head - if one could find a buyer. Longhorn cattle were overrunning Texas while the rest of the country was hungry for beef and for this reason cowboys began trailing them across hundreds of miles of wild country.

Teddy Blue and his father went by train to New Orleans, then by boat to Texas, to partake in the cattle drives. Teddy Blue made his first trip up the trail at 11 years of age. The cattle were received near Red River and Teddy Blue fell in love with the cowboy way of life.

By 1874, the trails moved west on account of the country becoming settled, allowing Dodge City, Kansas and Ogallala, Nebraska becoming the big cow towns. By 1880, Texas cattle had gotten as far north as Miles City, Montana, and Texas cowboys came with them, Teddy Blue being no exception.

After that first venture trailing cattle north in 1871, Teddy Blue came back up the trail with a herd of cattle in 1879, 1881, and 1883. On the last of those trips, he traveled as far as the Yellowstone River in Montana and decided to stay.

By 1884, Teddy Blue was working for Granville Stuart as a cowboy on the DHS Ranch. He married Granville's daughter, Mary and fathered eight children, thus permanently entwining himself in Montana's history. In 1886, as the roundup commenced in June, Teddy Blue was sent to "rep" for the DHS on the Moccasin Roundup. Here he met Charles M. Russell, marking the beginning of a lifelong friendship between the two.

Since the winter of 1886-87, brought about the demise of the DHS herds, Teddy Blue sought employment elsewhere until 1889, when he started his own holdings: the Three Deuce Ranch. This ranch was located approximately 13 miles east of Lewistown, Montana, in the Judith Mountains. Teddy Blue lived the remainder of his life there, raising his family. There are many stories of his friendship with notable historic figures, including the spirited Calamity Jane.

In 1937, along with Helena Huntington Smith, Teddy Blue wrote a memoir of his life from 1871 to 1886. The book, “We Pointed Them North,” was completed by 1939, shortly prior to Teddy Blue's death. In 1993, Time Life Books produced a documentary film called "The Cowboys," based on the much-loved book.