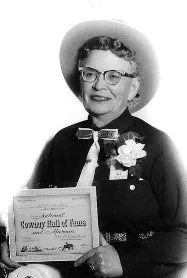 Pioneer cowgirl Peggy Bell's astounding skills with livestock and her determination to survive the pioneer days could challenge even the toughest cowboy, then and now. Her "horse whispering" ability - which she possessed as young as nine years old - is chronicled in her book When Montana and I Were Young.

As the first white person born in Great Falls, Montana, Bell's story will mesmerize you from beginning to end. Her love for nature and animals and her cautious attitude toward people provide a clearer perspective of the pioneer days and the dangers that the Wild West entailed.

Born to a Great Falls hotel waitress and a cowboy gambler, Bell - who died in 1982 - spent most of her hard life in Montana and Canada, ranching, horse breaking and writing. Her memoir ranges from childhood through her late teens and offers readers a rare look at a woman's life on the prairie. Descriptions of the unforgiving land are balanced by tales of the people who inhabited it, and in her book Bell tells of the abuse she suffered at home as a stepchild. No wonder, then, that she made use of herself out-of-doors: breaking wild horses and herding stray cattle, making a hand in a man's world, and at a young age too.,

Bell wrote in the book that meeting Charlie Russell was a highlight of her early days, because of his kindness. At seven years old, after her mother died, Bell was expected to take care of her three younger sisters as well as take on the responsibilities of the range. But her memoirs never wallow in self-pity, instead telling the reader matter-of-factly that this is how life was then. She relates:

"At nine years old I had to harness the team. The harness was heavy and horses too high, but I had to do it or survive another beating from Hedge. This is how.

"First, I put a handful of salt on the ground, and while the horse had his head down, licking the salt, I slipped the collar on. Sometimes the horse got wise and kept his head up where I couldn't reach it. Then I put the collar on upside down, buckled it loosely and pushed it up close to the horse's head where I could twist it over. (The horse wasn't keen on that maneuver.) I pushed the hames over the horse's neck and fastened the hame strap quick, before the horse could shake the hames off. I brought the breeching, pushed the right hand side over the horse's back, straightened the harness, slid the breeching over the horse's rump, pulled his tail from under the breeching, snapped the holdback straps to the martingale, and buckled the bellyband. Last, I put on the bridle. I unbuckled the cheek strap from the left side of the bridle, letting the bit hang free. Usually it took several attempts to get the bridle over the horse's ears. Then I buckled the throatlatch. If the weather was very cold, I tried to warm the bit by rubbing it against the horse's cheek so it wouldn't freeze to his tongue. Then I led the team to place beside the wagon tongue and hooked them up."

By the time Peggy was eighteen years old, she knew she was a better cowhand than most men she'd known. Cowgirl and author, Peggy Bell, went on to become a member of The Cowgirls in Great Falls, Montana and was inducted into the National Cowboy Hall of Fame before her death.