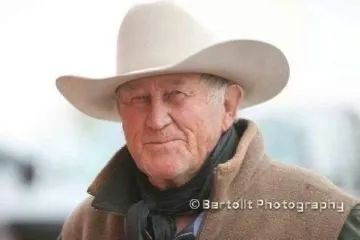 Born in St. Louis, Missouri, on March 19, 1864, Charles M. Russell came to Montana Territory early in 1880, just after his sixteenth birthday. Except for brief visits, he never went home again, for he had found his home on the broad prairies and among the pastel buttes of Montana. At first Russell worked as a horse wrangler, hung the pictures he created on bunkhouse walls, and fashioned models of animals from a ball of wax he kept in his pocket. He lived among his friends, both cowboys and Indians, and had few ambitions to become anything more than a cowboy who paid for drinks for his many friends by selling the occasional piece of art.

All that was changed in 1896, when the 32-year-old cowboy artist married a young lady named Nancy Cooper. She became his business manager and is recognized with not only encouraging him as a serious artist, but also with convincing the art world of his genius. She was known at times for "spoiling the fun" when she kept Charlie at his easel and discouraged his old friends from visiting too often.

The truth is that this ambitious little lady helped her modest husband become a full-time artist who is now recognized throughout the world, even by those who have never seen the West as he saw it. Russell had the ability to capture the thrill, humor, and sometimes the sadness of an era that he wanted to preserve. Much of Russell's talent, indeed, had to do with the fact that he knew the frontier was fast disappearing and used his artistic gifts to preserve it.

Charles M. Russell was at the height of his career in 1925, when his health began to fail. He traveled to Mayo Clinic in Rochester, Minnesota and underwent a necessary surgery that did not end his decline in health. He died of heart failure at his beloved home in Great Falls, Montana, on October 24, 1926.

Through his art, he left behind an invaluable record of the West that was.

Reports say that people from all walks of life, including his old cowboy and Indian friends, wept as the horse-drawn hearse carrying Charles M. Russell passed down the street.