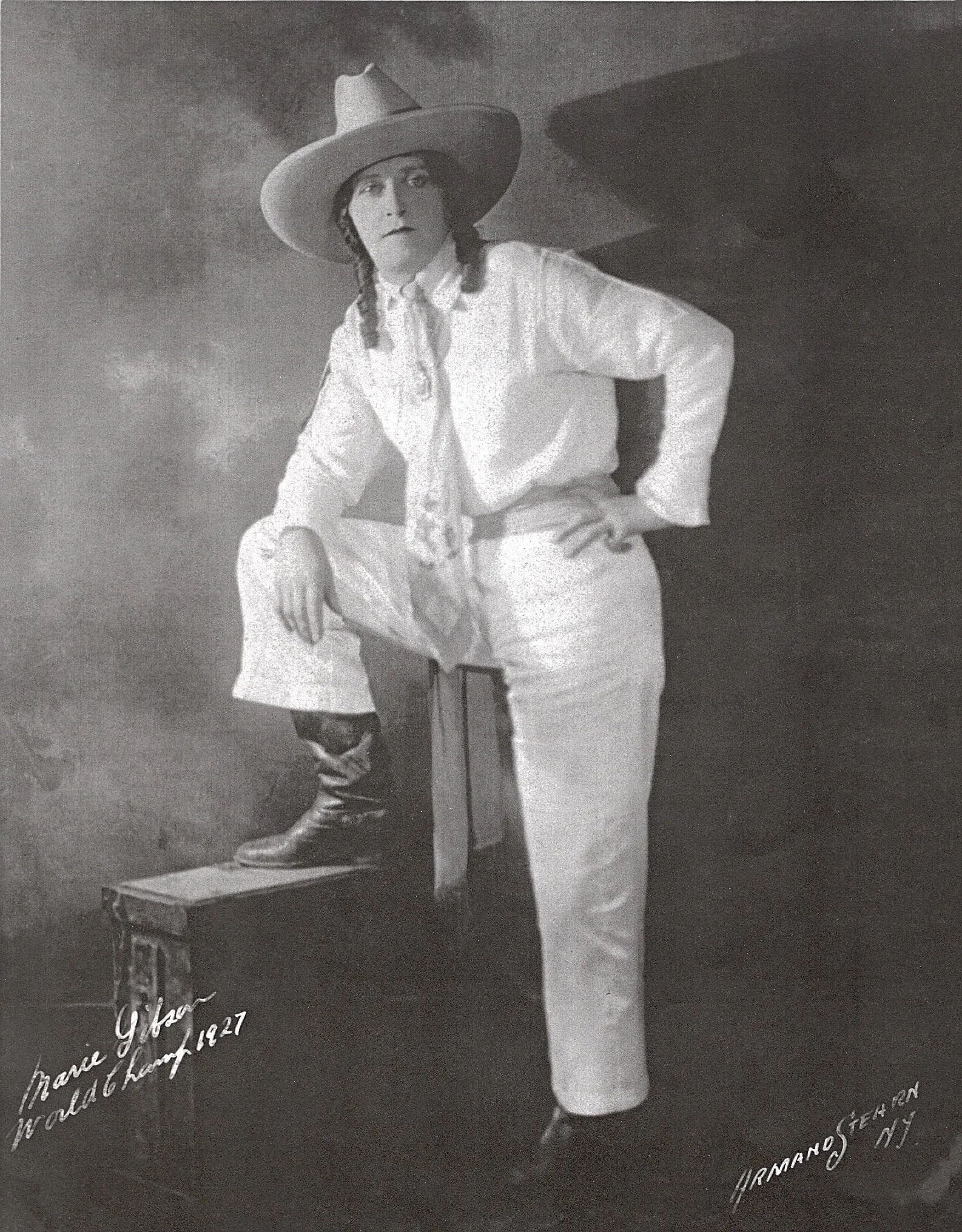 Marie Gibson's dynamic career as a bronc and trick rider began with Havre, Montana's 1917 Great Northern Stampede and ended with her death at a 1933 Idaho Falls rodeo. The blue-eyed wonder with a distinctive French accent was small in stature - a transplant to Havre from western Canada.

Marie's parents migrated from Belgium to Holland, Manitoba, Canada, where she was born on August 18, 1894. After a short return to Belgium, the Massoz family settled in Saskatchewan to stay. Here Marie learned the ways of ranching and handling horses and cattle. Besides farming, Mr. Massoz ran a livery stable, where Marie helped gentle horses as saddle mounts and helped train racehorses.

Her parents later moved to the Havre area in Montana, but Marie remained in Canada and married Joe Dumont. At 16 her first child, Lucien, was born. Three years later she and her little family followed her parents to Montana, settling at Burnham along the Milk River about 10 miles west of Havre.

Unfortunately, the marriage failed and Joe Dumont returned to Canada. Marie worked in Havre while her parents watched her three children. During the turmoil and hardships, she became acquainted with her neighbor, Long George Francis, and his friends: Ray Ellis, Jack Maybee, and Clayton Jolley. Marie would stop at Long George's ranch and watch the boys break wild horses to use for saddle and team animals. Soon, with their encouragement, Marie was riding bucking broncos herself.

In 1917, she entered the Great Northern Montana Stampede, produced by Francis and Maybee, winning third money in horseracing. At this show she first met Englishman Tom Gibson, who was a top Canadian bronc rider from the Red Deer area. They would meet again at a Canada rodeo and eventually married. Tom's bronc riding career was cut short when he was run down by a drunken driver in 1923, and his health deteriorated even further after contracting Tuberculosis.

From that first rodeo in Havre, Marie Gibson plunged into the North American rodeo circuit and began the long, hard, bruising climb to the title of World Champion Cowgirl Bronc Rider. After Havre, Marie participated in Canadian rodeos at Nelson, BC, Medicine Hat, Calgary, Moose Jaw, Regina and all stops in between. Later, she would travel all over the United States, competing in every major show in the country. A big boost to her career came at the Saskatoon rodeo in 1919. There she won the Best Woman Bronc Rider award, quite an honor for a comparative newcomer. That particular show was attended by English royalty, and after winning her award, Marie was escorted to the Royal Pavilion, where she had a personal audience with the Prince of Wales, who would eventually be crowned King Edward VIII. Although honored to meet the "handsome young man," Marie was appalled at her dirty and disheveled appearance and had wished she'd had time to clean up a little first.

The next major highlight of her rodeo career occurred in 1923, at the first of Tex Austin's New York City rodeos. Only North America’s best riders were invited for the nine-day show.

The following spring Austin decided to take his performers to London for the thirty-day British Empire Exhibition at Wembley Stadium. There Marie performed her usual trick and bronc riding every day despite sustaining several injuries which would have put a lesser person in the hospital. While touring England with the traveling "Wild West Show," she had the opportunity to meet the Prince of Wales again (as well as the Queen of England) at a party at Buckingham Palace. This time she undoubtedly had the time to be a little more "presentable," but obviously had made a better initial impression than she'd thought, as the Prince well remembered their meeting several years earlier.

Although still on the mend from the injuries sustained in England, upon her return stateside Marie participated in the Cheyenne Frontier Days rodeo in Wyoming and won the Women's World Bronc Riding Championship. She also won two additional World Championship titles at Madison Square Garden in New York City.

By 1930, she had grown weary of the demanding rodeo life. Even though she was reportedly earning $5,000 dollars a year on the circuit (a lot of money in the 1920s), many of her rodeo performer friends had been killed along the way to stardom. She planned to quit the rodeo circuit when her two sons, Lucien and Buster, completed high school, (daughter Lucy had died), and she planned for them to all settle down on their ranch.

But those dreams never materialized, for her career ended on September 23, 1933, at Idaho Falls. She had just completed an event when the pickup man's horse and Gibson's collided. Her horse crashed to the ground and the head injuries she sustained resulted in her death at age 39 a few hours later. Her son Lucien was the first to her side when she fell.