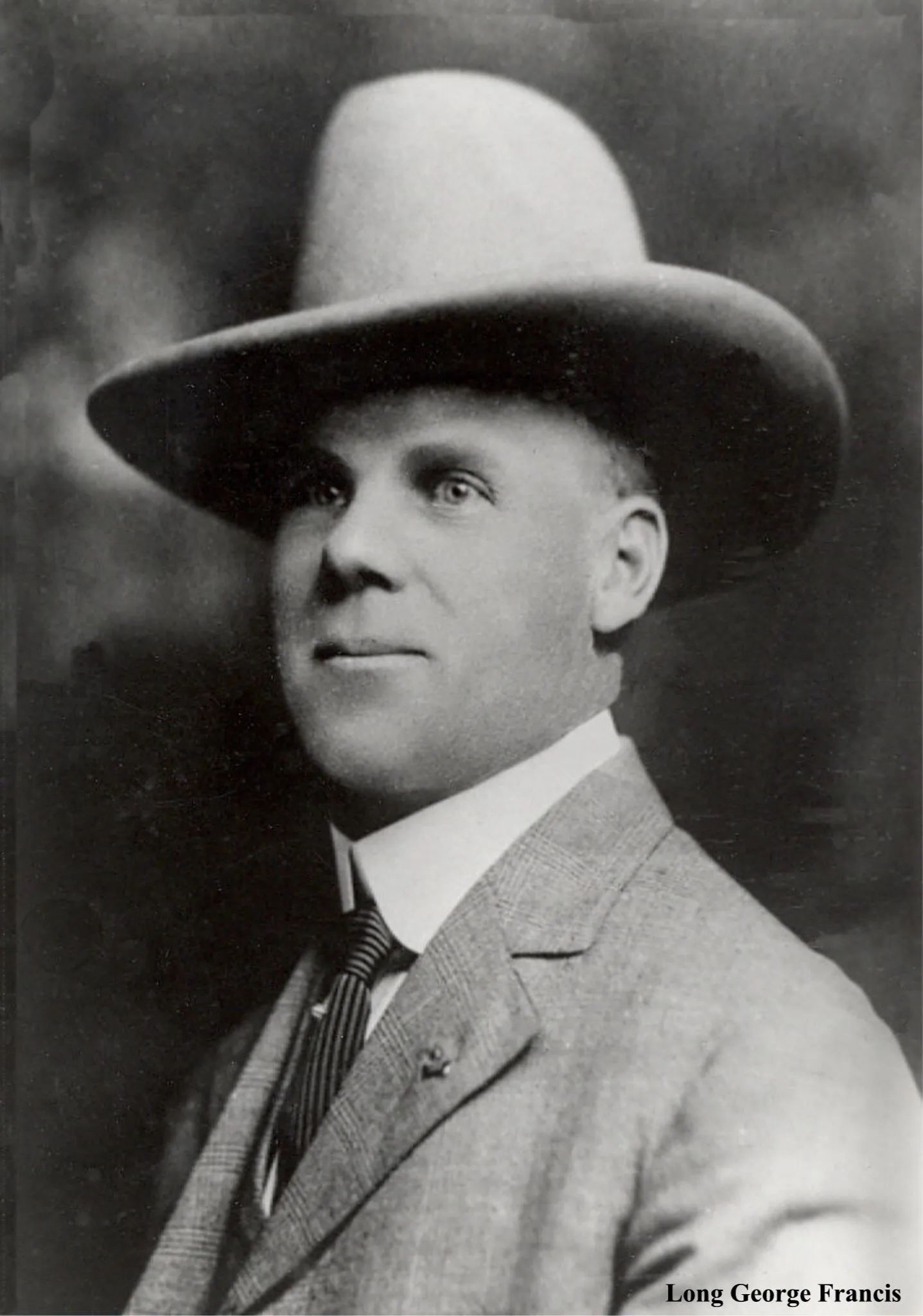 The reason George Francis was known by the nickname "Long George" was obvious to anyone who ever laid an eye on him. He stood a slender 6'6" tall in his stockin' feet, and in the high-heeled riding boots and tall crowned Stetson he always wore, he definitely stood out in a crowd. He was also famous for his fancy Western clothes and the engraved, pearl-handled, nickel-plated pistol constantly at his side. Complete with a long-legged bay trick horse by the name of Tony, and his silver-mounted saddle gear, his appearance certainly helped to create the mystique that was, and indeed still is, "Long George."

George Mortimer Francis was born September 21, 1874, at Camp Floyd, Cedar Valley, Utah. He came to the Milk River country of northern Montana in 1893, at the age of 18, on a cattle train with the Warbonnet Livestock Company. They had been previously running on the Fort Hall Indian Reservation in southern Idaho but, when crowded out by the influx of settlers, headed for Montana for the last of the open range. The cattle were unloaded at Box Elder and trailed to the rich grass of the Clear Creek Valley on the northern slope of the Bears Paw Mountains.

Long George spent the rest of his life in northern Montana and became something of a local folk hero. Quite the showman, he was instrumental in organizing and producing rodeos, the most notable of which was the Great Northern Stampede in Havre. Many of George's exploits, (on both sides of the law), were reported in national papers, including the New York Herald, and were also featured on many radio stations. A story of his life was considered for a movie in the early days of motion pictures, and was the subject of a 1989 book entitled Tall In the Saddle: The Long George Francis Story, by Montana historian Gary A. Wilson. The book was later republished by Globe Pequot Press and entitled, Long George Francis: Gentleman Outlaw of Montana.

George was a good hand with cattle and horses, and, although a flashy dressing showman, he was also a rather shy but extremely likeable man with a ready smile and a host of loyal friends. It wasn't all sunshine, however, as there were many rumors about his "long rope" and the fact that more than a few of the cattle and horses that he traded were not strictly his own.

"Mavericking," or branding slick calves missed by the roundup wagons, was a common practice at that time, but rumors persisted that George maybe didn't wait until the roundup was over, but hurried along the weaning process a little by helping himself to other folks' stock. His expertise with a rope no doubt added fuel to the rumors.

His real forte, though, was horses, and the demand for all types of horseflesh was at its peak in the early 1900s. Long George had a reputation for being a top horse trainer, and of course, abundant innuendo concerning the suspected means by which he'd obtained the many horses he traded continued to flourish. Such a reputation is bound to gain a man a few enemies, in addition to many faithful friends, and Long George accumulated more of each with every passing year. He was soon considered by many to be the leader of an organized band of cattle and horse thieves that operated statewide as well as in all of the adjoining states and Canadian Provinces. If ever an animal came up missing, "Long George" got the blame.

He was eventually charged with stealing a horse from one of his enemies, and a warrant for his arrest, boasting a $500 reward, was issued. George maintained his innocence, saying that he was being framed for spite. The resulting trial was quite a spectacle and widely reported by an Eastern reporter claiming that several "eyewitnesses" were interviewed although there were no witnesses. The newspaper account may have been baloney, but it was certainly befitting any Wild West movie. The report was that when the jury came in with a verdict of guilty, Long George produced a pistol that had been slipped to him by one of his many faithful friends, and holding the entire courtroom in his sights, backed to an open window, whistled for his horse Tony, and galloped away to freedom. That is a good story, but a long ways from the truth. George was convicted, but instead of showing up at his sentencing hearing, went into hiding, spending quite a length of time holed up in the Bears Paw Mountains, a fugitive from justice.

The death of Long George was also a mystery fit for the finest of the pulp fiction detective magazines, and the stories about his death (with varying degrees of accuracy) flourished. During a severe blizzard with the thermometer registering a chilling 22° below zero on Christmas Eve 1920, he was making his way to spend the holiday with his fiancé, who was teaching at a country school several miles northwest of Havre. With the visibility standing at near zero due to the storm, his 1914 Hupmobile slid off a cut bank and onto the ice of the Milk River.

George was badly injured in the rollover crash with a compound leg fracture and head injuries. With any rescue on the windswept prairie certainly not coming in time to keep him from freezing to death, he crudely splinted the broken leg and made an attempt to get to a house that he knew was a mile or two away. After a valiant effort dragging the broken leg through the snow, the blood loss took its toll, and it was clear to the nearly frozen cowboy that this was the end of the trail. With his pistol left in the wrecked car and his energy completely spent, Long George Francis remained the master of his own destiny. Rather than risk being found alive by predators, he used the last strength he could muster to plunge his pocketknife into his jugular vein, taking his own life. Ironically, had the cowboy been horseback, he probably would have survived the trip, served his time in the Montana State Prison, and then returned to marry his sweetheart as he'd promised.

“Long George” Francis was indeed a genuine folk hero in northern Montana, and like all folk heroes, the stories of his many exploits in life and the extraordinary circumstances of his death were told and retold by friend and foe alike, changing a little with every telling. Many of his loyal friends maintained to their graves that his death wasn't suicide at all, but that he was indeed murdered by his powerful enemies.