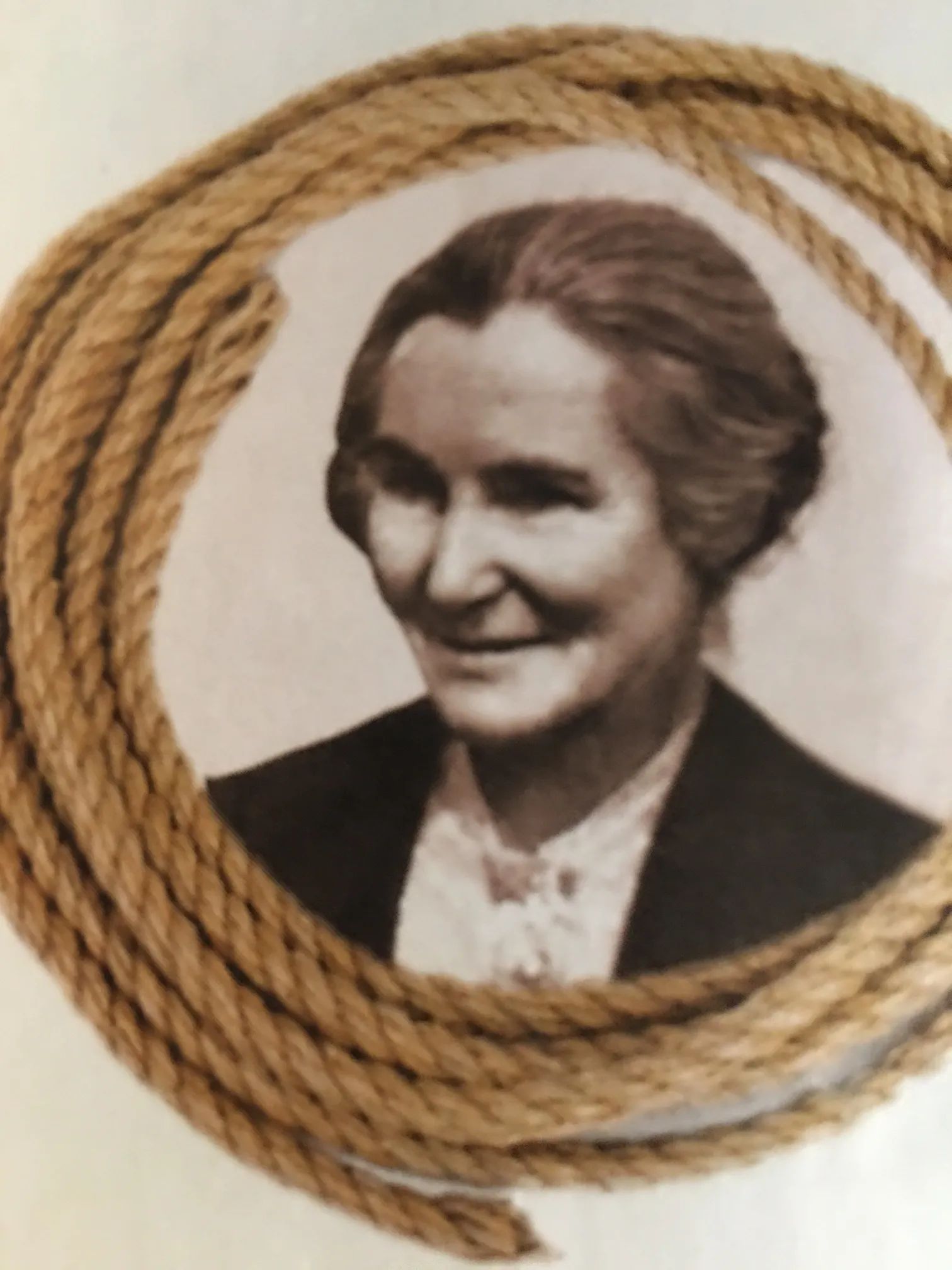 Hilda Redwing was born July 12, 1885, in Duluth, Minnesota, to John & Delia (Joyce) Ryan. Hilda was the eldest of five children.

The family moved to Havre, Montana, in March 1893. Hilda's father engaged in ranching for a French Count near Yantic, Montana, now Lohman. Eventually the Count sold his holdings and returned to France. The family then moved south into the Bears Paw Mountains, to what they called the "desert claim." They built a barn, bought some cows, and sold milk in Havre. Hilda helped her father milk the cows and her brothers delivered the milk until about 1900, when the family moved further into the mountains and built the Duke-Ryan Place.

Though Hilda was small in stature, she was long in willpower. One time, when she was very young and riding with her father and brother on a cold winter day, she saw a bunch of cattle. After checking on them and to save time, she cut over the hills to catch up with her father and brother. The snow had drifted and was solid enough to hold her, but Spot, her horse, sunk and was stuck. Hilda got in front of Spot and pulled the snow down with her arms, then trampled it with her feet until the horse could get its footing and get out.

Through the years Hilda helped her father wrangle horses for the YT Ranch, a big Texas outfit, and she helped area ranches with their roundups. At age 19, Hilda began breaking horses. She never cut her hair and all her life either wore her hair in long braids or a bun. She rode broncos at local events and her long braids whipped and were often compared to two bullwhips. Women couldn't compete for money in those days, so there are no records of her winning any events. However, Hilda could always ride with the best of the cowboys.

Between 1910 and 1915, Hilda and Ed ran a small bunch of cattle on the open range prior to the homesteader invasion. Since Hilda's calling in life was outside astride a horse, Ed hired help to do the housework and care for their daughters so Hilda could do what she loved. She worked with cattle, horses and other animals on the place, and one of her summer jobs was haying. Though her early riding was sidesaddle, she later rode astride on a Western saddle.

The Redwings eventually purchased the YT Ranch and Sawmill Gulch. They were doing well when Ed started thinking of buying a car. Hilda told Ed if he was getting a car, she was getting a new house. The Oakland Touring car arrived and that summer of 1916, construction began on the house. The new home consisted of ten large rooms, modern plumbing and battery-operated electric lights. Six generations lived in this home.

Ed and Hilda once bought 400 head of steers at Square Butte, near Augusta, and trailed them to a lease on the Blackfeet Reservation, near Two Medicine. Hilda was a part of this eight-day drive. In 1919, they ran 2,000 head of cattle on a lease in the Cypress Hills of Canada. The Redwings shipped 17 railcars of cattle out of Havre that year. The next year Hilda, her daughters Meryl and Rose, and a hired man, drove the cattle home from the Cypress Hills. In another venture, Ed and Hilda drove to Dutton and purchased cattle and a horse. Hilda rode the unfamiliar horse and by herself drove the cattle home in a two- to three-day journey.

Most of their cattle were sold in 1922 and 1923, due to financial difficulties, which forced the family to start all over again. Hilda began milking 32 cows and Ed delivered and sold the milk to the Hill County Creamery. By 1928, they had almost recovered when the Depression hit. Their cows were sold to the government for $9 a head. They struggled during the tough times until the rains came and prices climbed.

In 1948, Ed and Hilda turned their 12,000-acre ranch over to their eldest daughter, Meryl, and her husband. They moved into town so the grandkids could stay with them during high school, and they ended up staying in Havre the rest of their lives. Ed passed away in 1954. Hilda continued to help the family round up cattle into her 70s.

In 1966, when Hilda was 80, she was inducted in to the National Cowboy Hall of Fame, in the "Working Cowgirl" class. A highlight of her trip to Oklahoma City for the induction was meeting movie star John Wayne.

The last time Hilda rode a horse was when she was ninety. Standing on the end gate of a pickup, she climbed onto the horse, Tuffy. That year the Havre Roping Club honored Hilda and Bob Sterling, also ninety, at the Havre rodeo. Just before the grand entry, Bob's horse acted up and ran into Hilda's leg. It was obvious that her leg had been broken, but when folks tried to take Hilda off the horse her stubborn streak came out. She stayed on the horse until after riding in the grand entry. Once out of the arena and after the festivities had concluded, Hilda was lifted off the horse and loaded into a car to go to the emergency room.

Hilda was ninety-three when she died on March 13, 1980, in Havre. Hilda spent most of her life working directly with cattle and horses, which resulted in jobs that were considered "men's work" during the time. Her stubbornness, spunk, spryness, and keen interest in all that represented the cowboy of that era contributed to the woman known as Hilda Redwing, a memorable Montana cowgirl.