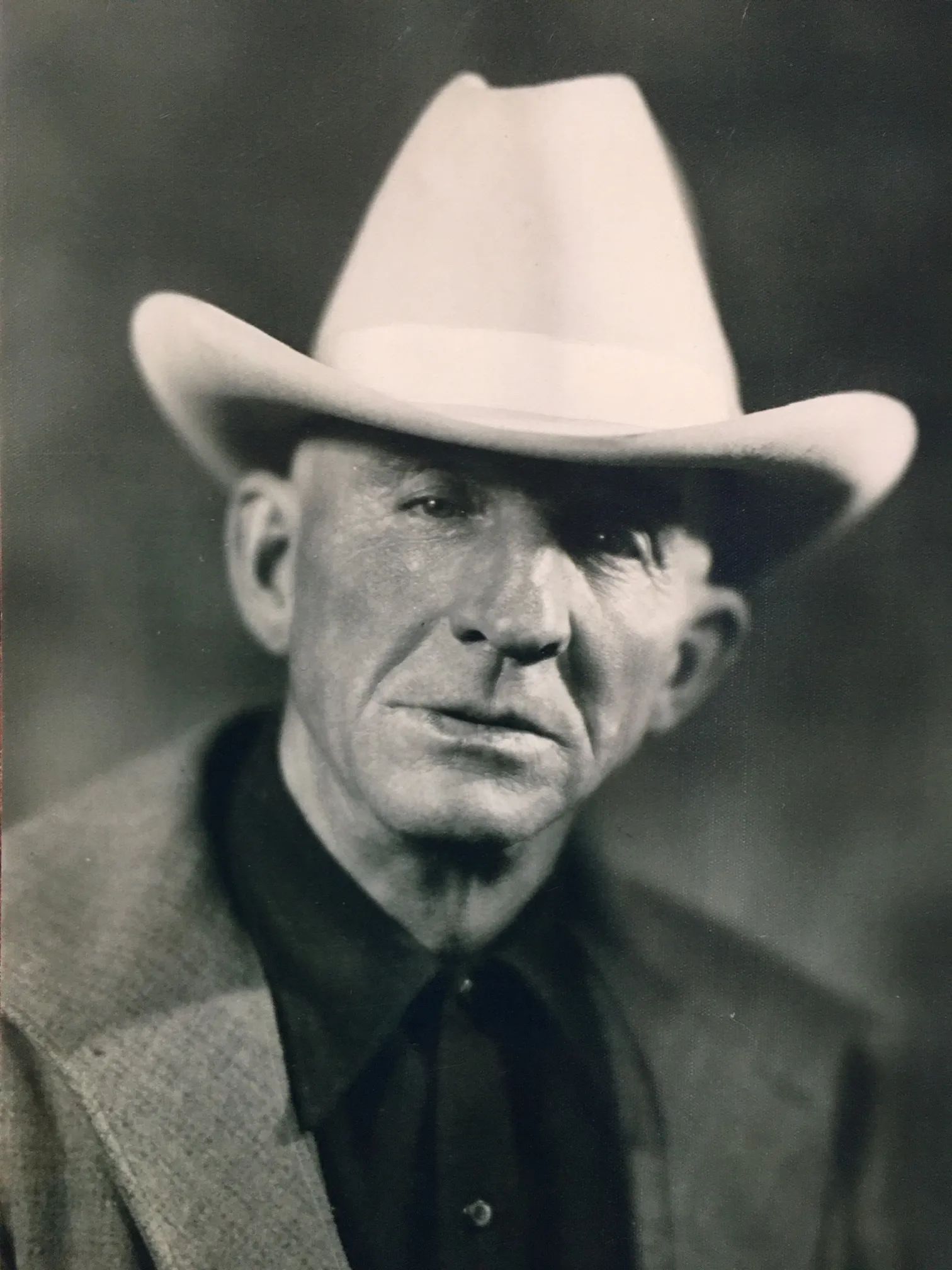 Ord Clinton Ames was born at Lawn, Nebraska, on April 10, 1889, and was named for Ord, Nebraska, by his parents Clinton & Margaret Iron Ames. In 1898 the family moved to Hutton, Montana, on the Rosebud. Ord's father traded horses with the Crow Indians; thus Ord's first trail drive was when he was 10 years old as he helped his Dad trail horses from Hutton to Lead, South Dakota. Ord later recalled that their meals during this trip included hardtack, bacon and corn, and that their route was by Scott, Pilgrim and Willow Creeks, the Bear Lodge Country, and Beulah, Wyoming.

When he was 17 in 1906, Ord went to work for John Holt's L-O Ranch on the Mizpah, a ranch that ran about 30,000 cattle at the time. It was during these years that he learned to ride well while proving up as a cowboy. After eight years at the L-O, he went to work for Riley Tyler at Stacey, Montana. It was while working for Tyler that Ord won his first saddle, at an arena without barriers, for his bronc-riding proficiency. This saddle was the first of many prizes Ord would win for bronc riding.

In 1917, he started worked for Phil Keffler on Bay Horse Creek and, in 1919, he filed for a homestead on Buttermilk Creek. (Palomino horses were called buttermilks during that era and there was a small herd roaming the creek when he filed). Since Ord worked away from home, Nellie kept the homestead chores going and cared for their children. Ord and Nellie's children were Marguerite Ames Huckins, Montana Ames Cook, and Delbert Ames.

In 1919, Ord moved the family to Bay Horse Creek for the winter, where he was working for Keffler. The family lived on cooked dry beans. Nellie cooked for the ranch hands in a wash boiler and kept beans hot for the cowboys whenever they stopped in to eat. Many people, along with the perishing livestock, would have lost their lives that winter had it not been for beans.

From 1929 until 1933, Ord spent most of his time taking cattle to "the road" for other people for shipping. From '33 until '36 he again worked for the L-O, which had been purchased by the McIntosh Brothers. From 1936 until 1942, Ord worked at the Bar C at Kaycee, Wyoming, and at Big Trails Wyoming as the cow foreman.

Ord landed in Miles City, Montana on New Year’s Eve 1942, where he was hired by John Mcnerney as foreman for the DDD outfit, which shipped thousands of cattle from Mexico into the area to restock during the Depression years. During the 1940s, Ord worked for Harold Burt north of Terry, for Van Savage north of Forsyth, for Ed Love, and for Cofield and Gayhart, also north of Forsyth. His last ranch work was for Sam Smith and Vic Rue at Broadus, and his last job in 1958, was Deputy Stock Inspector at Broadus.

Throughout his life, Ord preferred the back of a horse (especially a horse with a good jog trot) to any mode of transportation that had wheels. He did drive motorized vehicles, usually in first gear, in the last years of his life. He liked to sing to his grandchildren and they loved to hear him sing. He sang "Midnight," "Little Joe the Wrangler," and "The Golf-Darned Wheel." "Midnight" was a ballad about a bucking horse that bucked off all the cowboys, while "The Golf-Darned Wheel" was a story about a cowboy finding a bicycle near the bunkhouse. Not knowing anything about bicycles, he chose his first ride off a very long hill. The cowboy compared the bicycle to a bucking horse.

Ord was a true early-day cowboy who rode the range for more than 50 years. As he covered much ground in his work with horses and cattle, it was great fun to travel with him in later years, as he could relate many interesting incidents to the buttes, gullies, creeks, and numerous landmarks in Eastern Montana and Wyoming. Ord's major interests throughout his life included horses, rodeos, cow outfits, and the friends he made along the way. He worked with many of the noted men of the trail days. He was a great visitor and could talk to anyone. He enjoyed meeting people from all walks of life and hearing about their lives, their stories, and their experiences.

Though Ord's life, as stated in a 1956, newspaper article, was not one of spectacular achievement, it was one of adventure and human interest, as he lived a rugged life as a horseman and cowhand. He lived and worked during the transition era between big cattle ranches, cattle trails, and open range to cattle trains, homesteading and fences. Ord Ames passed away in April 1959, and was buried at Broadus, Montana.