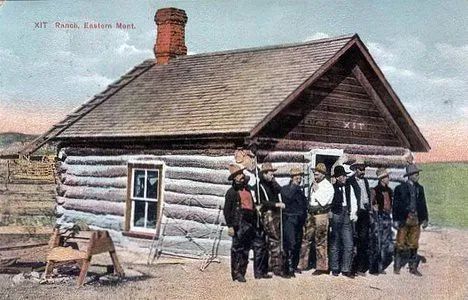 The long lasso of time goes back to 1875. The Lone Star government was getting cramped in its old capitol, and the Texas Constitutional convention set aside three million Panhandle acres to build a new capitol. Action dragged until fire destroyed the old capitol on November 9, 1881.

A deal was made with Charles B. and John V. Farwell of Chicago to build a new capitol building and accept the three million acres as payment.

The Farwells borrowed money in England to develop a ranch. The corrals, foreman's residence, and bunkhouse had just been built at Buffalo Springs, 32 miles north of Dalhart, Texas, when the first herd of Longhorns arrived.

AB Blocker, a South Texas trail driver, and BH "Barbecue" Campbell, first general manager of the ranch, squatted on their boot heels in the corral and figured out a brand that could be run with a straight iron and that rustlers could not easily alter. Blocker ran the first "XIT" then and there. The XIT also stood for ten in Texas, as their ranch in Texas included property in ten counties.

The XIT brand was recorded in five states, which eliminated the necessity of a road brand when cattle were trailed north. The XIT outfit kept all their cows and calves in Texas, sending the steers north. They sent five herds to Montana in 1894, all two-year-old steers.

The headquarters in Montana were north of Terry on Cedar Creek. Eventually the XIT shipped ten trainloads of cattle there every year. They finished shipping around the first of November, then they unshod the horses and turned them loose on Cedar Creek and laid off all the men but six. Bob Fudge kept his cook and Al Denby at the Hatchett ranch, and Rute Morris kept his cook and L.D. McMakin at the Cedar Creek ranch.

The XIT had several rules for their men to follow; however, it has been said that No. 9 was the only rule that ever got a man fired: Never abuse any livestock.

To an XIT hand, coming along largely after the open range in Texas had been put under fence, the XIT range - stretching from the Musselshell east between the Yellowstone and Missouri rivers in Montana - played the same role that Abilene, Wichita, and Dodge, had filled for an earlier generation of cowboys.

The heyday of the XIT lasted little more than 10 years. Most of the original ranch in Texas was subdivided to homesteaders by 1905, and the remaining ranch was sold in 1912.