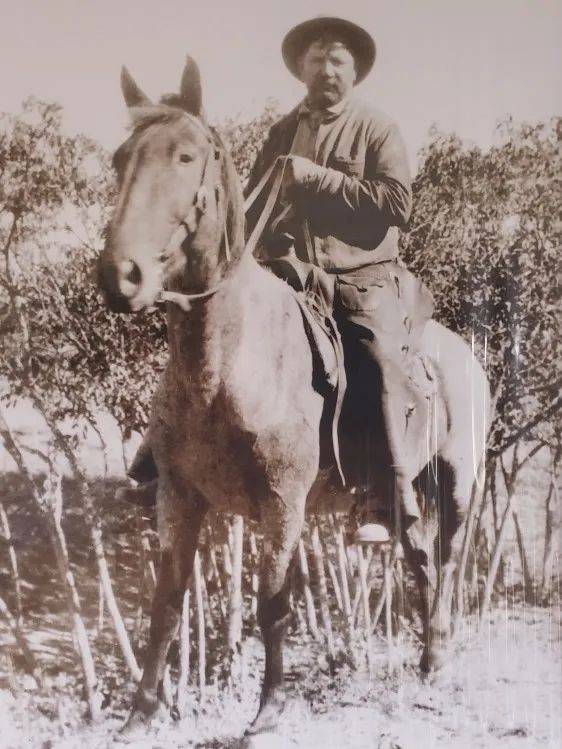 Bob Fudge was born in Lampasas County, Texas, February 14, 1862. The Civil War left the Fudge family quite poor, so in the spring of 1872, they started for California with everything they owned. This included 1,000 grown steers and 200 Thoroughbred horses. The party consisted of Bob's father (a doctor), his mother, two brothers, one sister, two uncles, and four aunts. They had four wagons drawn by horses.

They camped one night in New Mexico. There the Comanche Indians made a raid, killing one of the uncles and stealing all the steers and all but four head of horses. The family hitched the four horses to two wagons and started for Miscere, New Mexico, about 25 miles away. After being in Miscere five or six days, Bob's father contracted smallpox and died. The same disease killed Bob's only sister, his uncle, and two aunts. This left his mother with three small boys and two aunts.

In the spring of 1873, his mother, her two sisters and the three small boys started back to Lampasas with an oxcart and a yoke of oxen. They lived with her brother that winter. Next spring, Bob's mother took a homestead on Taylor Creek, near the old Taylor Ranch - the 33. At the age of 12, Bob started to work for Judge Taylor, who owned the 33 Ranch. Bob was paid $20 a month, which was a man's wages in those days. Bob supported his mother and brothers on this sum.

This same spring Bob's older brother ran off to the buffalo range, becoming a gunner for a big British outfit.

At the age of 15, Bob worked for Pink Higgens and Al Shanklin, owners of the Wineglass outfit, running many thousands of livestock. Bob helped make up and receive five herds of cattle, going north with the last herd in May. This herd was trailed to Hugo, Colorado, and turned over to a man named Cheetum who also bought all the horses but the cowboys' private horses.

Bob trailed cattle north until 1887, when he married and worked for himself for seven years in Texas. In the spring of 1894, his wife died. They had one little boy which his wife's parents took as their own. In Bob's great sorrow he went back to trail life again. He left everything he owned with his brother, taking only a cowboy outfit and the "heaviest heart a cowboy ever had." His little boy died not long after.

Bob trailed cattle for the XIT outfit in Texas until 1912, when he went to work for Frank Wilbur on Montana's Powder River for some 15 years. Bob also ran a small bunch of cattle while working there.

Eventually Bob leased the Jimmy Duncan ranch near Biddle, Montana. He then purchased the Shorty Turley ranch south of Biddle from Lee Swartz in 1930 and moved his headquarters and cattle to this ranch. Bob lived for a time in a small house on the east bank of Little Powder River, not far from the town of Biddle.

Funeral services were held in Broadus, Montana, with Masonic Rites, and he was buried in Valley View Cemetery near Broadus. His funeral was one of the largest in memory despite a terrible wind. People came from many miles away, including three old cowboy friends who came with him up the trail from Texas.