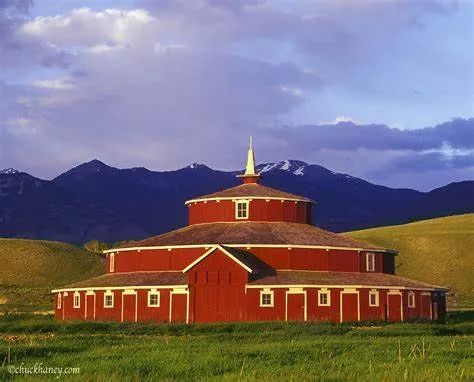 Montana's most famous red round barn was built in 1882, by Noah Armstrong, at that time superintendent of the Glendale smelter and discoverer of the Hecla Mine in western Montana. Armstrong, who immigrated from Canada, loved horses and horse racing. When he purchased a ranch near Twin Bridges, Montana, he built a magnificent three-story round barn exclusively for his horses. One of the reasons the barn was round was because of the small track on the ground floor used to exercise the horses in the winter. Around the track were box stalls for about 15 to 20 horses. Other ground floor features included a saddle room, a veterinarian's room with medicine and supplies, grain bins, an office, and living quarters for the stablemen.

The second floor of the barn was devoted to the storage of hay and grain for feeding and had chutes going into each stall for easier feeding. The third floor contained a large water tank placed to provide water under pressure to any part of the barn. A freight elevator made transportation to the two stories easy. A windmill on top of the building pumped water to the third floor tank.

The front entrance door of the barn was graced by a hand engraved, 4-by-8-foot picture of a horse scene. This picture remains on the barn today, although weather has beaten it badly.

But the real story of this barn is about a horse that was born, raised and trained there; the only Montana-raised horse ever to win the Kentucky Derby. He also won such important races as the Clark Stakes and the American Derby.

This little chestnut horse named Spokane really did accomplish something that May day at Churchill in 1889. There were powerful entries that year which included Once Again, Bootmaker, Sportsman, Cassius, Hindoocraft, Outbound and Proctor Knott. The odds on Spokane were 10-to-1; the odds on Proctor Knott, the favorite, were 1-to-2. And, indeed, Proctor Knott was a horse to contend with, for he had top credentials. Sired by Luke Blackburn, he was a large, strapping horse and had won the Futurity the previous year. He ran with power, stamina, and was a pacesetter like his father. Proctor Knott was the toast of Kentucky and Tennessee.

As the field of horses bolted from the gate, Proctor Knott took a position he was used to: the lead. But Spokane, in his usual style, hung back in seventh place. Then after the turn he began to stretch himself, moving up to fifth, and then, seemingly with ease, to third place. Attention began to focus on the copper-colored chestnut challenging the mighty champion. Once Again, which like Spokane preferred to start near the rear of the pack, had also moved up and was in second position in the race. It was Spokane's good fortune to gain the inner rail, while Proctor Knott lost many lengths by bolting to the outside.

As the field neared the head of the stretch, Proctor Knott was still lead ing, but then the unbelievable happened: Spokane passed Once Again and moved up to Proctor Knott.

Stride for stride the two horses came down the stretch. Spokane's jockey had not touched the whip to his mount, but Proctor Knott's rider began using his vigorously. Not until they neared the finish line did Spokane's jockey use his stick. But one good lick did it - and with a gallant lunge, Spokane forged ahead by a nose, with Proctor Knott coming in second, Once Again third.

The little horse set a new record (for three-year-olds) of 2:34-1/2, beating Czar's mark of 2:36 made at the Blood Horse Association of San Francisco. The purse amounted to $4,800 and Thomas Kiley was the jockey.

Those backing Proctor Knott clamored for another chance, and about a week later, the two horses met again in the Clark Stakes at the Downs. Again Proctor Knott was made favorite and again Spokane was victorious.

On June 22, at Washington Park, the horses met yet again. And again Spokane beat Proctor Knott, this time winning the American Derby for $18,000. In July, Proctor Knott earned somewhat of a revenge over Spokane by beating him in the Sheridan Stakes at Washington Park by three lengths. But this was to be Spokane's last race, for he was later hurt and was unable to race again.

When Spokane died, Noah Armstrong had a pair of cuff links made from the horse's eyeteeth. They were passed on as a family treasure, and were last known to be in the possession of Armstrong's grandson, Armstrong Turner of the Federal Reserve Bank of Seattle, Washington.