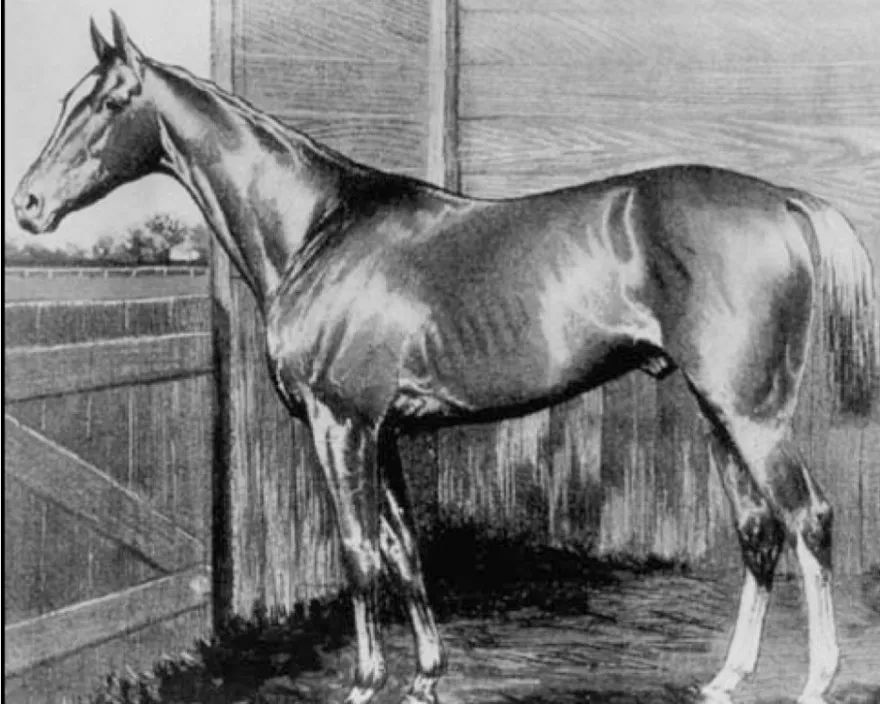 In 1885, Noah Armstrong purchased the Thoroughbred mare Interpose at the time bred to Hyder Ali, a leading racehorse sire, and shipped her to his Doncaster Ranch in Montana Territory. The Doncaster Ranch was located little more than a mile from what is now Twin Bridges, Montana.

The following year, while Armstrong was in Spokane Falls, Washington Territory on business, he received a telegram informing him of the birth of the foal. In honor of Spokane City he named the colt "Spokane." The Doncaster Ranch was known for its spectacular round barn, which stood three stories high and featured an indoor racetrack, where Spokane was born and where his training began.

Spokane was a small chestnut that showed tremendous promise as a racehorse by winning two of five starts as a two-year-old. Knowing that Spokane had the talent for greatness, Armstrong entered him in the May 9, 1889, Kentucky Derby. When the favored horse, Proctor Knott – bigger and taller than Spokane and winner of the 1888 Futurity Stakes – came out on the track, the audience went wild with applause. When little Spokane appeared, the crowd laughed. At the starting shot Proctor Knott, a great pacesetter, took the lead while little Spokane ran to the rear. Running with Proctor Knott were the horses Once Again, Sportsman, and Hindoocraft. When the race was half run, Spokane was still in the backfield. That’s when the jockey began to urge the small horse on. They rapidly passed Once Again, Sportsman, and Hindoocraft and began matching Proctor Knott stride for stride. The audience screamed at first, then silence engulfed the spectators as they all focused on the two horses running neck to neck. Spokane had the staying power and heart to plunge gamely ahead and run across the finish line first!

Accounts of the great race printed in newspapers across the nation and in regional publications such as The Great Falls Tribune and Rocky Mountain Husbandman were read time and again. For a horse to come out of the wild and primitive West in those years and win the Kentucky Derby was almost unbelievable. Spokane set a Kentucky Derby record that day, running the mile-and-a-half race in 2:34-1/2. His record was never broken, as in 1896 the Kentucky Derby race was shorted to a mile-and-a-quarter.

For early-day Montanans, Spokane's win at the Kentucky Derby was a great source of pride, as was the day six months later when Montana Territory became a state.

Spokane went on to set yet another record when he became the first horse to win two Derbies. On June 22, 1889, he again beat Proctor Knott to win the American Derby. In the same year Spokane won the Clark Stakes at the Downs.

Noah Armstrong loved to joke that during Spokane's lifetime Kentucky, Illinois, Washington, Tennessee and Montana all put in their claims on the horse. In fact, he said, Montana was the horse’s birthplace and would remain his home.

According to the Spokane Review, when Spokane won the 1889 Kentucky Derby the citizens of Spokane Falls, Washington, purchased a horse blanket that was later presented to Spokane and his owner. The blanket, purchased for $5,000, featured sky blue velvet with gold braid and lettering, the race colors of Spokane’s owner, Noah Armstrong. The blanket also featured a hood for the horse, a gold belt, and the lettering "Spokane," and "Presented by the Citizens of Spokane Falls." The blanket lost for several years was found again in the early 1940s.

The Madisonian, a newspaper published in Virginia City, Montana, featured a story about Spokane in the June 1889, issue. According to the story, Spokane was an Indian "Spirit Horse" who returned to the world with speed and endurance which equaled wings of speed furnished by the Great Spirit.

Another feature appearing that year in the Madisonian was a poem/song written by a man known as Fat Jack: “There came from the Rockies / Far away in the West / A stead called Spokane / That of racers is best / Of all the gay flyers / That ever was seen / For he came from Montana / Where the grass grows green.” Chorus: “Spokane! Spokane! / You are a dandy flyer / And you go from Montana / Where the grass grows higher.”