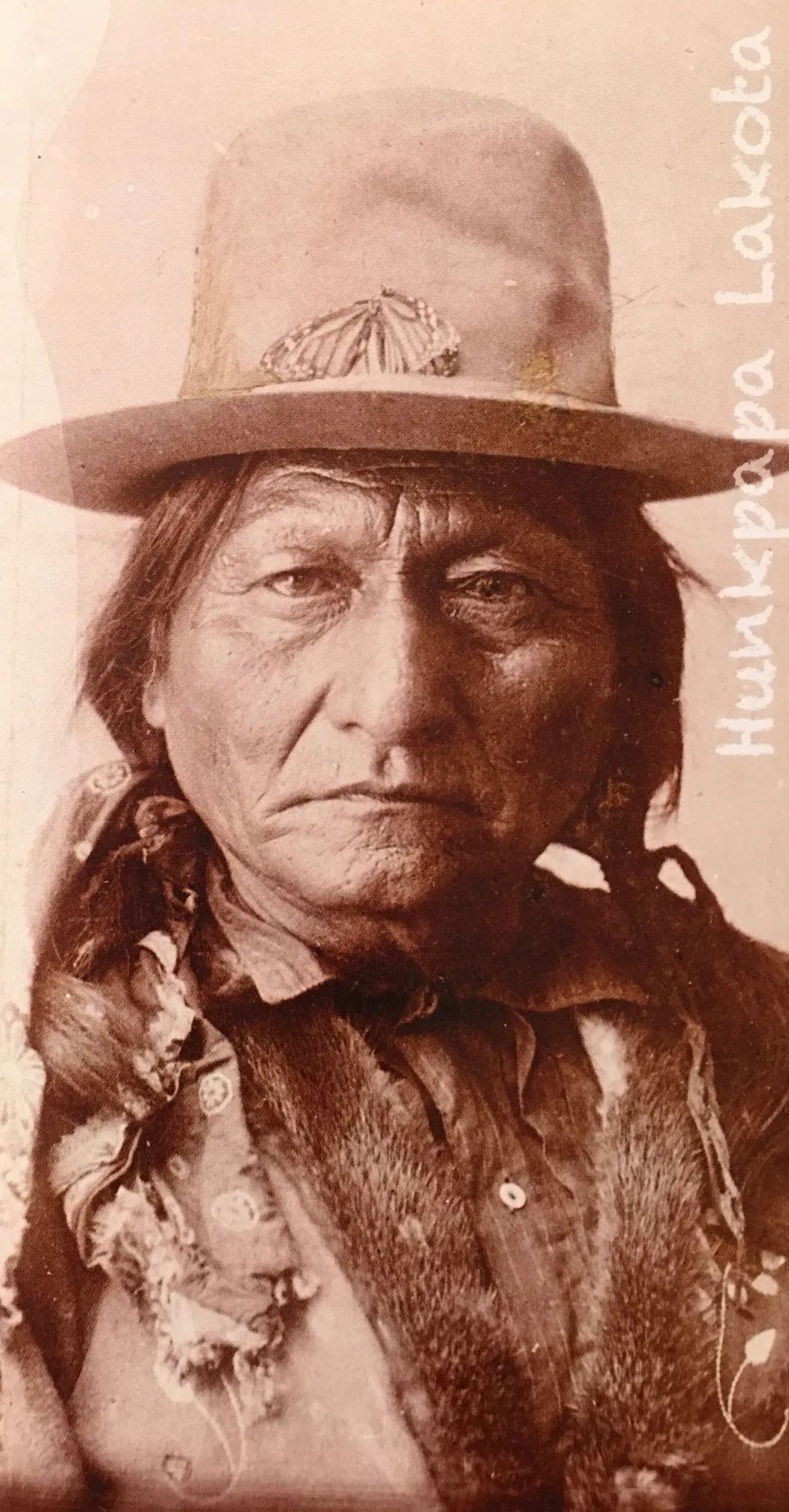 Sitting Bull was born Hoka-Psice (Jumping Badger), but was later renamed for his father, Tatanka-Iyotake (Sitting Bull). He earned the nickname Hunkesni, or "Slow," due to his deliberate pace and way of life. As a youth he excelled at foot races, was an expert horseback rider, and was very accurate with a bow and arrow. As a young man he became a leader of the Strong Heart Warrior Society and later was a member of the Silent Eaters, a society concerned with tribal welfare. He was also a member of the Buffalo Society and the Heyoka Society, societies in which members dreamed of buffalo and thunderbirds.

During his early 20s, Sitting Bull became a Sioux holy man, or a wichasha waken. He understood the complex religious rituals and beliefs of the Sioux and the natural phenomena related to their beliefs. As an adult, Sitting Bull possessed an intense spirituality that led to a constant quest to understand the universe and bring infinite powers to the benefit of his people.

Sitting Bull was wounded in combat by a Crow warrior, who shot him in the foot. This wound caused him to limp for the rest of his life, but did not affect his quality of life. During his lifetime, Sitting Bull had five wives: Light Hair, Red Woman, Four Robes, Snow-on-Her, and Seen-by-her-Nation. His first wife, Light Hair, produced a son (Crow Foot, who died of disease at a young age), but Light Hair died during childbirth. Sitting Bull's only other child was an adopted son named Young Bull.

Treaty violations against the Lakota Sioux during the 1850s and '60s caused the Sioux increased agitation with white settlers and traders. In 1863, the Hunkpapa Lakota warriors participated in the Battles of Dead Buffalo Lake, Stony Lake, and Whitestone Hill. The U.S. Army prevailed in these battles, killing about 100 Sioux and capturing 160. It is likely that Sitting Bull took part in all these battles. In 1864, Sitting Bull was again wounded when attacking the Fisk wagon train that was traveling through Sioux territory. He was wounded this time through the hip and back.

The 1863-64 fighting caused Sitting Bull to harden his views about the presence of whites in Sioux lands. He led numerous war parties against Fort Berthold, Fort Stevenson, and Fort Buford between 1865 and 1868.

Sitting Bull is notable in American history for his role in the major victory against George Armstrong Custer and the 7th Cavalry at the Battle of the Little Bighorn on June 25, 1876. Sitting Bull had summoned the Lakota, Cheyenne and Arapaho to his camp on the Rosebud Creek in Montana Territory. There he led them in a sun dance offering prayers to Wakan Tanka. During this ceremony, Sitting Bull had a vision in which he saw soldiers falling into the Lakota camp like grasshoppers falling from the sky. The Lakota moved camp to the Little Big Horn, where they were joined by 3,000 more Indians who had left reservations to follow Sitting Bull.

Custer was forewarned by his Indian scouts that they were drastically outnumbered, but attacked anyway. With about 200 soldiers Custer's troops lost ground quickly and were forced to retreat. The tribes led a counter-attack against the soldiers, on a ridge overlooking the Little Big Horn River, ultimately annihilating Custer and the 7th Calvary.

During the year following the Little Big Horn Battle, the Calvary pursued the Lakota relentlessly - until May 1877, when Sitting Bull led his band across the border to Wood Mountain, Saskatchewan, Canada, where he remained until 1881. On July 19, of that year, Sitting Bull surrendered at Fort Buford in Montana. From there he was sent to the Standing Rock Reservation and then on to Fort Randall, where he and his followers were held as prisoners of war for nearly two years.

In 1885, Sitting Bull was allowed to leave the reservation to join the Buffalo Bill Wild West Show. He stayed with the show only four months. He returned to the Standing Rock Reservation and chose to live in a cabin on the Grand River very near where he was born. He continued to live in the old ways, keeping two wives and rejecting Christianity. Still, he insisted that the children attend the nearby Christian school in the belief that the next generation of Lakota would need to be able to read and write.

Soon after his return to Standing Rock, Sitting Bull had another vision. This time he saw a meadowlark light on a hill beside him and he heard it say, "Your own people, Lakota, will kill you." Nearly five years later, in 1890, Sitting Bull was shot in the head and killed by a Lakota policeman attempting to arrest him to prevent him from supporting the Ghost Dance movement.

As an important chief and holy man under whom the Lakota tribes united in their struggle for survival on the northern plains, Sitting Bull remained defiant toward American military power and contemptuous of broken promises to the end. He was remembered among the Lakota as an inspirational leader, a gifted singer, a loving father, and a fearless warrior.