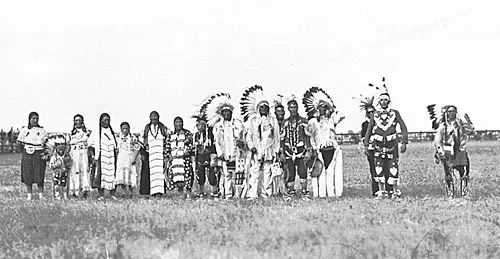 The Montana Assiniboine Indian Tribe paid a great role in the shaping of northeast Montana and the growth of the early fur industry.

Original boundaries of the Assiniboine Tribe were vast, including land from west of the eastern border of Minnesota to the Milk River of Montana and north into Canada. The tribe moved where buffalo were plentiful.

In 1851, with the Fort Laramie Treaty, the Assiniboine were assigned the lands they claimed south of the Missouri River. The Assiniboine and Sioux Tribes held approximately 20 million acres until 1886, when the 2 million acre Fort Peck Indian Reservation in northeast Montana was created through agreements between the tribes and the United States government. The reservation followed wars created by treaty violations and “white” encroachment. Additionally, fighting among the tribes shaped the reservation. Between 1871, and the turn of the century, Assiniboine people experienced many changes and much suffering, as the buffalo were gone, food was in short supply, winters were severe, people were sick from disease, and more than 300 people died of starvation.

The Assiniboine Indian Tribe has many names. Assiniboine is a word the English borrowed from the French, which was taken from the Ojibwa word asinii-bwaan, meaning stone Sioux, as well as the Cree term asinipwat, which also means "stone." A nickname they call themselves is Assseeneepoituc, which means "those who cook with stones." (They would heat fist-sized stones until they were red hot and then drop them into water, causing the water to boil, which would cook the meat.) Another name they call themselves is the Nakota, which means "the allies" or "the people." Still another name is the Nakona or Nakonabi, meaning "The Friendly People."

The Assiniboine families were a very strong unit. The men were hunters and warriors. The women’s traditional duties included cooking, making clothing, and caring for the children and the home. The Assiniboine chiefs were very powerful. Chiefs had to be great hunters as well as great warriors and being the son of a chief did not mean that he would be the next leader.

Ceremonies were important in the Assiniboine culture. The Grass Dance was practiced to make the grass grow so the buffalo would come. The Tancowaci Dance was the dance without robes. Another dance was the Medicine Lodge Dance. The Sun Dance was held once a year when it rained for a long period of time.

It is important to recognize the Assiniboine Indian Tribe of northeast Montana in the Montana Cowboy Hall of Fame & Western Heritage Center, as the people were truly native to the state and the tribe contributed extensively to the history of Montana and the early fur trade.